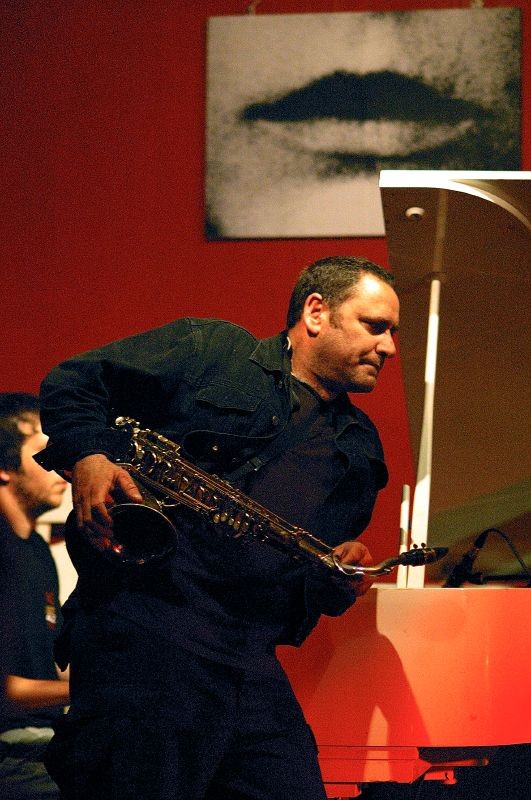 Gilad Atzmon is scheduled to perform jazz and speak about Israel September 17th at the Unitarian Fellowship of Houston (1504 Wirt Road). He is an outspoken critic of Israel, but in his writing and speaking, he makes frequent prejudicial errors and distortions. When called out for them, he won’t accept correction. He is a bad spokesperson for the anti Israeli-Apartheid movement (and all peace and justice movements), because he has continually misled his audiences about crucial issues. Though he is frequently labeled by others as ‘racist,’ whether or not that is true, his words are too often defamatory, inaccurate, and self-aggrandizing. While we organize against Israeli apartheid, we must avoid such problematic spokespeople.

Here are some of the reasons so many have renounced him as an ally:

“Ali Abunimah… is just dishonest/stupid. Abunimah calls Israelis Zionists because he needs the so called Jewish ‘anti’ Zionists to support his operation. The last time i communicated with Ali Abunimah he wrote to me, ‘Just refer to Zionism instead of Jewish identity and everything would be fine’. He basically asked me to lie.. I obviously refused…”

Gilad fabricated the quote he attributed to Abunimah.

“If you are a Gentile (non-Jew), you can not really join a Jewish anti-Zionist cell, because you are not racially qualified.”

This is factually wrong — both groups have non-Jewish members. When I called him out for his error, Gilad responded,

“You are just not intelligent enough to grasp the argument.”

Repeating this smear to the public alienates his fans from working with these important organizations, and that is a problem.

Gilad told the world on the BBC,

“No one until now said that I got my facts wrong, that I misquoted anyone, nobody until now. There is not a single critical voice who said Gilad is wrong about something.”

This type of egotism makes it impossible for Gilad to be accountable to the public that reacts to his writings and speeches. Gilad is dismissive of constructive feedback and insulting.

Gilad sees Jewish exclusivity everywhere, calling even anti-Zionist Jews a “racially oriented exclusivist culture driven by chosenness,” and concludes they are unable to “move beyond the Talmudic phase.”  (ie. don’t interact enough with non-Jews). Anti-Zionist Jews often have non-Jewish partners, are committed to working in diverse movements, and clearly denounce the idea of ‘chosenness.’ Claiming that racial exclusivity is found in all Jewish groups is defamatory nonsense. Instead of encouraging Jewish allies to join the movement for justice in Palestine, this type of distortion pushes them away.

Gilad objects to the term ‘Israeli Apartheid,’ because he feels that Israel’s system is worse than apartheid. The word “apartheid” is used by BDS activists and others who seek justice in Palestine, and accurately describes Israel regardless of degree. Just like Zionists create Holocaust exceptionalism (denying that the Holocaust is one of many genocides), Gilad seems to create the opposite type of exceptionalism, in which Israel’s war crimes are unlike anything else that has ever occurred anywhere. Gilad does not see Zionism as fitting into white supremacy, but rather as an unprecedented evil. It’s true that there are unique and greatly threatening aspects of the Israeli state, but Gilad dismisses all the clear similarities to white supremacy and Christian imperialism.

Gilad compared the Israeli attack on the Gaza Freedom Flotilla to the killing of Jesus. He also said,

“American Jewry makes any debate on whether the ‘Protocols of the elder of Zion’ are an authentic document or rather a forgery irrelevant. American Jews do try to control the world, by proxy… I would suggest that perhaps we should face it once and for all: the Jews were responsible for the killing of Jesus who, by the way, was himself a Palestinian Jew.”

Gilad carelessly or intentionally adopts racist language. Invoking the ‘Christ-killer’ slur invokes past centuries of anti-Jewish racism and violence in Europe and the US.

“I read him and I was shocked to find out that this guy knows more about Jewish identity than I do! … David Duke is a humanist because he says, ‘I want to celebrate my right and you should celebrate your rights’ whether you are Muslim or black or whatever. He believes that all people should celebrate their rights, this is his current philosophy.”

How Many Respected Allies Have Broken with Gilad?

The following educators, writers, activists, and leaders have renounced working with Atzmon:

author’s note: Several years ago, I collaborated with Gilad Atzmon on the Klezmer Musicians Against the Wall Compilation CD