Zach Braff on Wish I Was Here

Leon casino, Zach Braff returns to movies with his sophomore directorial feature, and it’s a winner. Wish I Was Here tends to revolve around Aidan (Braff) a struggling actor and his relation to his family, his wife, his estranged brother, his fellow thespians competing for roles and finally his dying father. Braff doesn’t do anything that hasn’t been done before, but he does it with an assured style that gives the audience insight to the character’s personalities.

Wish I Was Here starts out with cool songs and snappy family patter. Unable to land a gig Aidan now has to procure funds to keep his kids in private school after his dying paterfamilias (Mandy Patinkin) has informed him that he has to pull funding for the kid’s schooling. Yet Wish I Was Here is edited and designed to keep you spirited and happy, because this is really about people who adapt and survive.

“Don’t we all have father issues?” Braff asks Free Press Houston in an interview last month. Braff was in Austin for a fan screening of Wish I Was Here. Finding a deal with a major studio was not an option for Braff, despite having helmed the cult classic Garden State.

In fact, Fox Searchlight Pictures released Garden State in their banner year of 2004 that also saw them release Napoleon Dynamite and I Heart Huckabees. “That was all Peter Rice,” says Braff about the Fox exec that oversaw Searchlight at that time. For Wish I Was Here Braff used a Kickstarter campaign to raise funds for the movie when he failed to get a studio or investor interested in the project.

“Kickstarter allowed us to stay in L.A. because a normal financial backer would make you leave L.A.,” says Braff. “Because there are no tax incentives. We would have to shoot in Vancouver. It curled my stomach because all those locations in L.A. are like a character in the film. So when we were able to shoot there I wanted to show a wide range, whether it be the desert, or the beach, whether it be the Hollywood hillside, or the Deep Valley.” Locations include the Hollywood Hills in the Sunset Plaza area, and a trailer park on a cliff in Malibu. Braff was also able to shoot exteriors at Comic Con in San Diego and match the interiors later, which they recreated in L.A.

Wish I Was Here also co-stars Kate Hudson, Joey King, Josh Gad, and Ashley Greene and is distributed by Focus Features. Additional cameos by actors like Donald Faison, who starred opposite Braff in Scrubs, give the film an informal vibe.

Braff was roommates with Donald Faison in 2002 when he was playing Sebastian in Twelfth Night at the Delacorte Theatre in Central Park. Faison was working on the film Uptown Girls. “We rented an apartment together downtown, it was a pretty crazy summer.”

It was during this time that Braff was writing what would be his directorial debut. “I had Garden State almost done but I was really working on getting the financing. I was at the stage in filmmaking where everyone was passing on it. I wrote Natalie Portman a letter from the Delacorte because she had done The Seagull there. I’m sitting in the same dressing room that you once sat in, will you please read this?” 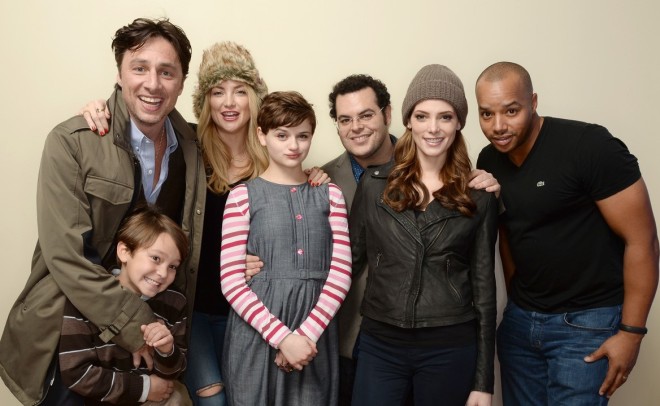 While at first Braff’s Kickstarter efforts were covered in the media with a sense of false outrage, now he’s considered a forerunner in using the internet technique to raise funds. “Part of the Kickstarter process was promising early screenings of the film with Q&As in major cities across the country,” explains Braff. “I didn’t know when I promised that that I would be doing a Broadway show or that Focus would choose to distribute the movie in July. So we developed the whole calendar around that. I leave after my Sunday matinee, fly to whatever city it is, do press during the day on Monday then at night do a screening with the backers.

“And then fly back first thing Tuesday morning and do the show Tuesday night. In September I have a couple of weeks off and I’m doing the same thing in Europe: Paris, Rome, London, Berlin, there’s another city,” says Braff who’s currently starring in the musical Bullets Over Broadway.

Braff originally met Mandy Patinkin on the street of New York City. “I’m just like everyone else, I don’t go up to celebrities or actors on the street because I’m shy. My girlfriend encouraged me to talk to him, and of course he’s a musical theater legend and in The Princess Bride,” says Braff. “He was with his son who loved Garden State and we just talked on the street corner. When I walked away I realized I had an in. He was perfect for the part so when I contacted him I said, ‘Hey remember we talked on the street.’ Everyone sings by the way. Mandy and Kate have great voices. Josh Gad who sings on Broadway but is now known as Olaf from Frozen. And myself. We would all sing on the set; both Mandy and Josh were giving me Broadway advice.”

Braff wrote the film with his brother Adam: “We sat together at my house for about three weeks and hammered out the skeleton of the story. We had the spine of the story with a rough outline and then we collaborated back and forth, he lives in Hawaii and I commute between New York and L.A. He might tackle scene X and then we would swap and each make a pass at that scene. We were constantly swapping and giving each other notes. Because I’m the director we eventually had to be 51/49. If you disagree on something someone has to make the decision where to go from there.”

Garden State’s soundtrack was a big seller. The soundtrack to Wish I Was Here includes three original songs and includes artists like Coldplay, Cat Power, The Shins, and Bon Iver. “I had a secret weapon, I showed them the movie,” said Braff. “If a song comes out of you that’s inspired by the film I can’t think of a better, cooler honor.”