Craig Kinsey’s “American Roots and Machines” is Just What the Dr. Ordered 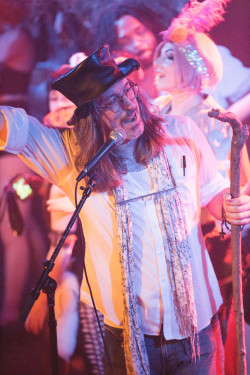 With all the zeal of a religious service, the Good Reverend himself, Craig Kinsey, launched right into “Here Comes the Party” and followed it up with a version of the Rolling Stones’ “Ain’t Too Proud to Beg,” —dedicated to Kinsey’s father—in a wonderfully weird mash-up of Motown and punk. The stage was bombarded with members of Houston’s premier burlesque group, “Dem Damn Dames,” and balloons and confetti were scattered among the faithful, along with an explosion of bralettes, wigs and rhumba panties.

Despite the fact you could feel sweat rolling down the small of your back in the smoky, incense-filled club, and that it was a relief to have a cigarette on the balcony in the sweltering Houston night, people milled giddily around, clapping their hands on each other’s shoulders, smiling shit-eating grins. Even the bartender, leaning toward you with a conspiratorial smile, thought he knew you. It was like fellowship at a church service, aside from the pungent pot aroma and scantily clad women, and exactly what Kinsey wanted for his birthday party/CD release of “American Roots and Machines.” 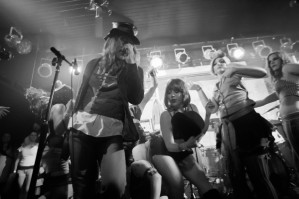 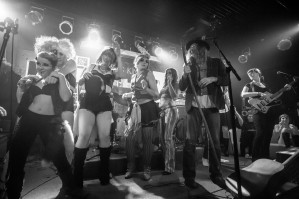 The manic over-stimulation of the night—where one second you’d be sharing a drink with someone and the next, they would be pulled onstage to perform amateur burlesque—included the pristine voice of an opera singer, Alicia Gianni, who sang an aria during Kinsey’s signature drinking chant, ‘Puccini’s Drunk Again.’ Even Jack Massing, one of the Art Guys, ran on stage to ironically request “Freebird.”

One of the more interesting distractions was the art installation of an over-sized robin’s nest with piñata-like eggs by Heath Brodie, an artist who goes by the name “Journey Through.” His environmental sculptures are meant to be enjoyed—and destroyed—by those who venture through the installation. Although one or two eggs were smashed open, the majority of the crowd never did see what emerged, though I suspect it was Kinsey-inspired swag, like the t-shirt that boldly proclaimed, “I’m not moving to Austin!”

While Kinsey played a number of well-known and loved crowd pleasers, the party was to herald his new album, “American Roots and Machines.” The album, replete with call and response anthems, classic blues mixed with punk and ample gospel choir riffs, also includes the 14-minutes-long, “Gettysburg.” The battles, the nuances, the whole love/hate thing Kinsey has going on with America in general is churned out in this song. If you missed the show this past Saturday, July 26th, the least you can do is listen to “American Roots and Machines,” which mirrors a live show in all its frenzied glory. 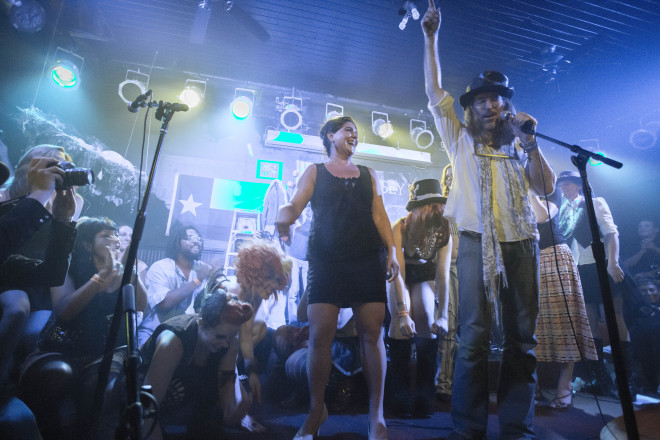 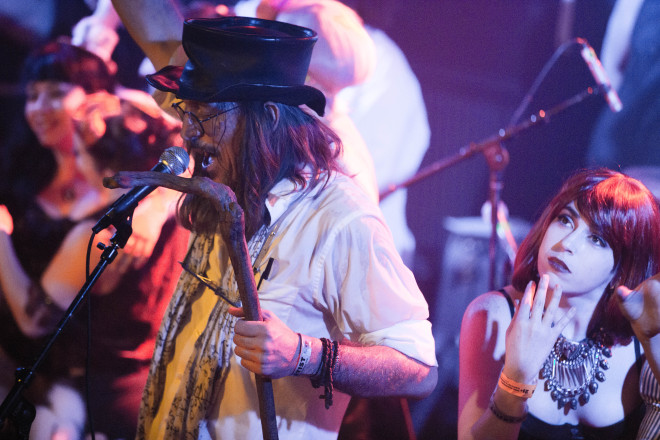 3 Responses to Craig Kinsey’s “American Roots and Machines” is Just What the Dr. Ordered