Magic in the Moonlight

Leon casino, Woody Allen’s latest film, Magic in the Moonlight, unwinds in the early 1920s in the French countryside. An accomplished magician  (Colin Firth) sets out to debunk a spiritualist (Emma Stone). Simon McBurney, Eileen Atkins, Hamish Linklater, Jacki Weaver, and Marcia Gay Harden are among the co-stars. Accolades should also go to the cinematography of Darius Khondji, which brings out the idyllic character of county estates, observatories next to the coastline, tree-lined pathways and the sentiment inherent in those surroundings.

But things aren’t always bright and sunny in MITM. Some scenes depict séances in darkened drawing rooms and the candle lit dimness creates a spell in and of itself. Séances and interest in the occult were actually very popular among the well to do of that time period. 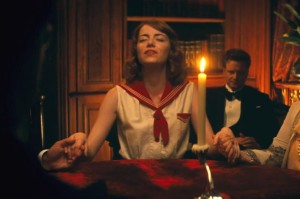 Allen probes the struggles of Firth and his sense of agnostic belief in the face of unexplained, and possibly religiously inspired, events. At all times Magic in the Moonlight is a breezy comedy and while questions of doctrine occupy some of the running time romance is never far behind.

Allen throws the audience a curve ball with some pensive moments that deflect the movie’s central plot. As a result I didn’t see the big reveal coming and when it happened it was a wonderful movie moment. It’s kind of the real reason people watch movies.

Magic in the Moonlight opens this weekend in an exclusive engagement at the River Oaks Three, expanding to a few additional screens later in the month.