A Gringo Goes to Cuba

By Anonymous
Photos by Laura Gonzalez

I pressed my face against the glass, scanning the coastline for a marker, a monument, or hell, I didn’t know what exactly, anything to show me where the Granma landed or the Bay of Pigs invasion occurred.  I had been in the air a couple of hours since leaving Mexico City when the island of Cuba came into view. I was about to arrive in a land I really only knew about through the oral myths gringos tell one another. 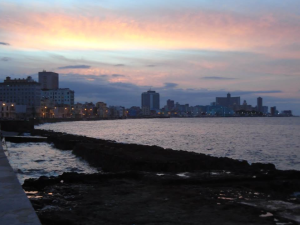 Let me start by saying this: I’m not a communist, a socialist, or a capitalist, so I don’t have a dog in the fight.  But the fact of the matter is, both for the left and the right in the U.S.A., it is near impossible to obtain accurate, non-politicized, information about Cuba.

First, the normalizing of relations with Cuba will not help sustain the Cuban government, as most Republicans, such as Chris Christie, like to claim.  Historically, the need for constant vigilance against invasion, attack, and counter-revolution by the United States has strengthened the Cuban state, while the embargo provides a convenient excuse used by Cuba’s politicians to explain government failures.  So normalizing relations will, if anything, eliminate some of the ideological rhetoric that has supported the Cuban government.

Secondly, the nightly news talk of Cuba’s tourism industry not being able to handle U.S. tourism is bullshit.  Three million foreign tourists visited Cuba just in the final week of last year, so I think the infrastructure can handle it.  And at the end of the day, Cuba is like any other government — they can limit the amount of visitors they receive.

Obama announced the new relationship with Cuba on December 17th, the day I arrived in Havana.  On the way into the city from the airport, the lack of advertising was like a breath of fresh air.  There was maybe one billboard, with a state slogan, “Gracias, Che, por tu ejemplo,” and nothing else for miles and miles.  The cab driver was excited to hear I was a gringo, and was the first to tell me what happened between the governments of our countries.  He was clear that more than anything, he was overjoyed for the release of the Cuban Five.

I spent 17 days in Cuba, and traveled many places, including Havana and Santiago.  It’s true I didn’t see too much luxury, but I also didn’t see any desperation.  I didn’t see what I had become accustomed to seeing in this country, in Mexico, and everywhere else in this hemisphere: people just left to fend for themselves on the streets without anything.  To my knowledge, that doesn’t exist in Cuba.

All Cubans have some things, such as education, food, tobacco and their health.  For example, the life expectancy for a Cuban is only a few months lower than a yankee’s, and the literacy rate there is higher than in the U.S.A.  And this despite the fact that at the time of the Cuban revolution more than 20% of the country was illiterate. 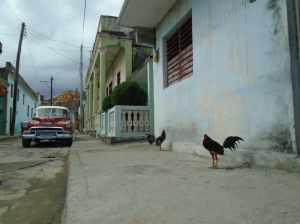 It’s true Cuba is not rich like the United States is rich, but this does not denote a failure by the Cuban government.  If you travel south, and you really travel, then you know how common it is to take showers from a bucket, or get by on just a meal a day in Mexico, or Bolivia, or pretty much anywhere else in this hemisphere.  The average Cuban may not be eating steaks, but neither is the average yankee.  All Cubans, however, are eating…and receiving health care.  And for the most part, they seem genuinely supportive of their government, and believe in the revolution and its gains.  Cubans have the ability to buy luxury items, just like we do, if they have the extra money, but their basics are covered by the state.  These basics include cheap electricity, telephone and running water for almost everyone.

Cubans also vote in elections, and are just as skeptical about the validity of our elections as we are of theirs.  Really though, how many of us here are actually voting?  How many of us here feel like our system is just a process of elimination between the highest bidders and not real democracy?  There are lots of countries in the hemisphere that have less than us yankees.  But in Cuba it appears that what is had is shared more equitably than most places I’ve been, and seeing that was worth the trip.

Supposedly, United Airlines is waiting for government approval to start Houston to Havana flights.  So if you go it is a good idea to learn as much Spanish as you can before leaving, but knowing Spanish is not a prerequisite for enjoying yourself in Cuba.  If you want to leave Havana by bus, buy your ticket at the bus station a few days in advance.  While you are in Cuba, try to stay at Casa Particulares (homestay, bed & breakfast style), not in hotels, and, once you get settled, ask about how to change some of your tourist money for national money.  And if you get the chance to wade through the shallows squid fishing, keep your dominant hand free; then, after you hit them with the light, take a breath and make a quick, controlled grab for your dinner.

Sounds in the Key of Love: Stevie Wonder at Toyota Center