Leon casino, “Graciela’s family lived in a tiny town—her step-father worked for the police department and everyone knew everyone. Her step-father was physically abusive to both Graciela, her mother and her two younger siblings.

“We can’t report anything to the police about what he does to us,” Graciela said. “He’ll just hurt us more.”

Graciela was terrified of what he might do if he found out she was pregnant, and she didn’t think it was right to bring a baby into her violent home.”

This is one of many true stories from Janes who have called the hotline in Texas which provides legal assistance to pregnant minors. 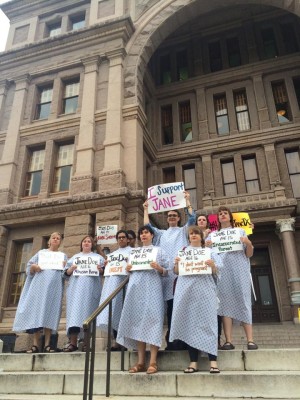 “Janes” on the Capitol steps. Photo by Heather Busby

Over the weekend, activists clad in hospital gowns gathered at the Texas Capitol to protest a bill that would strip a vital protection for some of the most vulnerable in Texas-pregnant minors.

Under current law, a person under the age of 18 cannot get an abortion without the consent of a parent or legal guardian. Most teens who get abortions are able to do so with consent from their parents, but for a small number-between 200 and 300-this is simply not an option. These minors are called Janes.

In 1999, judicial bypass was adopted by the state of Texas with bipartisan support, and it allows a judge to grant Janes abortion access without the notification or consent of the parent(s).

If a Jane is in danger of facing physical, sexual, or emotional abuse as a result of notifying their parent, or has no parent to give consent, judicial bypass is in place to help them.

Some proponents have stated this bill will close up “loopholes” in the current law. The Texas Alliance for Life, which worked closely in drafting this legislation, claims it will protect parental rights. During debate on the House floor, Morrison argued, “It would be traumatic for a teen to have an abortion without her parents there.” Some have even gone so far as to claim these minors are purposefully going through the court system just to lie to their kind, loving parents.

Anti-abortion politicians have stooped so low in their attempt to eradicate safe, legal abortion access they have blinded themselves to the reality of who these laws were created to protect, even if it means putting teens, sometimes even children, in unconscionable situations. Legislators who drafted HB 3994 did not consult organizations like Jane’s Due Process, which provide legal representation to Janes seeking a judicial bypass. 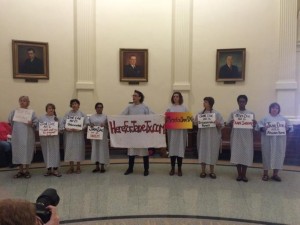 One “Jane” activist explained this is exactly why the #HereforJaneTX movement was launched.

“It is time to stand up and elevate the untold stories of Janes across Texas. Each Jane is different, and every reason they need help is valid.”

She and other “Jane” activists stood in the Capitol holding signs with the ages and circumstances of real Janes who have used the current judicial bypass system.

The reasons Janes need this system are numerous. Often times these minors face severe abuse at home, or their parents may be deceased, incarcerated, or are abusing drugs and simply aren’t around. Some Janes are survivors of rape or incest, homeless, or are undocumented.

Without an effective, expeditious judicial bypass system, Janes in Texas will be left with few options and more vulnerable than ever.

To learn more about this legislation and ways to take action through this grassroots movement, visit the #HereForJaneTX website. For more information about the judicial bypass process, visit Jane’s Due Process, a non-profit which provides legal representation to pregnant minors.