An Epitaph to Lucky Burger (And What It Signified) 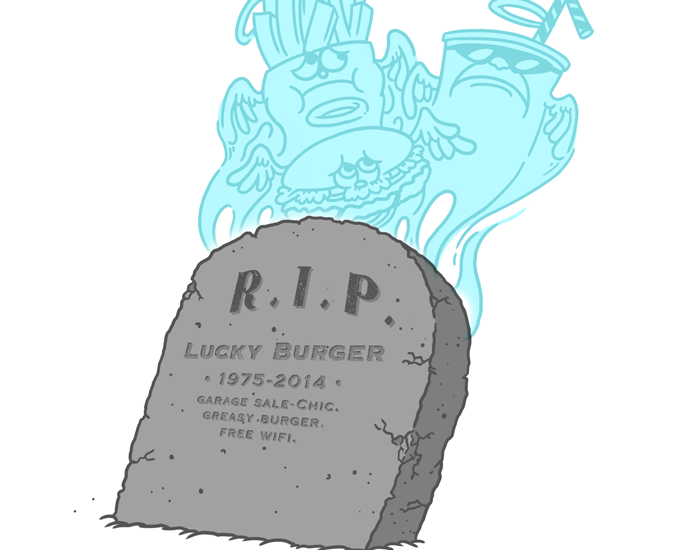 Lucky Burger, a South Montrose/Lower Richmond institution, died last month from gentrification-related causes. It was an unassuming establishment, despite its ostentatious design, jutting out from the corner of Mandell and Richmond shaped like a 1,000-gallon hat, that served standard issue greasy burgers and fries on paper plates. It was empty most of the time, with its gingham-patterned tablecloths, its noisy window air-conditioners, its barely passable service, hosting a rotating cast of working-class Hispanic workers, drunk hipsters, and neighborhood residents who had given up on cooking that night.

It wasn’t much, this burger joint. “To be honest with you, the burgers weren’t that good,” said Ben Clark, a Montrose resident who once lived close to Lucky Burger, “but it was close and it was cheap, you know?” Those who frequented the establishment knew it as a place by which to keep time. While the rest of Montrose galloped ahead, tearing down the old apartment complexes that once housed the neighborhood’s workforce, closing the gay and lesbian hangouts that had once defined lower Westheimer, Lucky Burger stayed, seemingly undisturbed, not even updating its menu, not so much as updating its website.

But just as gentrification came for Chance’s, and Cafe Artiste, and Mary’s, and 1301 Richmond, and Dirk’s, and EJ’s, and the Old Fiesta, it came for Lucky Burger. The immediate cause of closing was redevelopment. Braun Development, a Houston-based company, recently purchased the lot
that contains Lucky Burger, The Harp, Maria Selma, and the now-closed Orange Bar. They plan to bring in new tenants and make extensive
investments in the aesthetics of that corner of Montrose. They have already locked down a new tenant, The Revelry on Richmond, which will “cater to the crowd around the neighborhood,” the people who have moved to the gleaming new apartment complexes that have sprung up in the past
two years. The new bar will serve “craft beer” and “gourmet burgers” to its new clientele.

Lucky Burger first opened its doors in 1975, going through a number of hands, the last time in 1998. For as long as I’ve known the place, it has been in the hands of an East Asian family (the Tse’s) who ran it like a family business. When you came in to order your burger and crinkle cut fries with the red soda, you could hang back and watch the older man in the kitchen throw the patties on the grill, the younger son at the standing bar flipping through the Greensheet or the Houston Press. The prices rarely budged (I remember paying roughly the same amount of money when I graduated high school in 2005 as I did five years later) and that price, along with the pedestrian-like quality of the food, sort of fooled me into thinking that this place, like Chupultapec and Alladin’s would be able to earn a reprieve from the wrecking ball. But it didn’t.

Braun Development, in interviews about the deal, emphasized that all parties were ok with the decision. The Tse’s would not try to re-open elsewhere. They will retire.

The restaurant is survived in closing by the janky establishments in the neighborhood that still remain, including the C store, La Tapatia, and Ruthie’s. It is preceded in death by the places I mentioned above, and by a whole generation of Montrosians who grew up going not just to Lucky Burger, but to the old Dietrich’s on Westheimer, to the Cafe Adobe on Shepherd-to all of the people who can no longer afford to live in Montrose, having made beelines for Third Ward and the East End, but still trek back on Friday night to drink in the darkness of Poison Girl and Grand Prize.

I don’t want to be sanguine about this. I understand that as more and more people with good incomes move into the city, a homogenizing process will take place. I know that before long, every establishment will offer hand-cut fries, burgers with fried eggs, and local brews. But, in honor of the dearly departed Lucky Burger, I want to remember the Montrose that flourished when it first opened. I want to remember that the neighborhood once was the refuge of the outcast, the freak, the rejected. That Montrose, before it became the playground of engineers and Bikram yoga enthusiasts, once was the place where you could live cheap, make art, be gay, be weird and drift-just drift. To paraphrase Daniel Webster, Lucky Burger was, as I have said, a small burger joint, where the food wasn’t even that great,  but there were those who loved it-me among them.