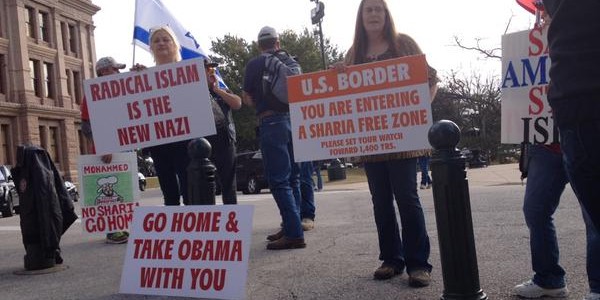 Today is Texas Muslim Capitol Day. With the 84th Texas legislative session underway, many organizations are arranging field trips to Austin, providing the opportunity for Texans to take a tour under the pink dome, ask questions of their representatives, and experience our beautiful capitol.

The Texas chapter of the Council on American-Islamic Relations (CAIR) organized Texas Muslim Capitol Day. From their website:

In the morning, sessions on political activism will be held. In the afternoon we meet with our state representatives.

Texas Muslim Capitol Day 2015 is an opportunity for community members to learn about the democratic political process and how to be an advocate for important issues.

But for Texas State Representative Molly White (R-Belton), Muslim Texans are not welcome at their own statehouse:

What is particularly astounding — and all of it is astounding, to be clear — is the purpose of the Israeli flag. Are visitors to her office meant to announce allegiance to the Israeli government as well?

Outside the Capitol many gathered to protest Texas Muslim Capitol Day, bearing signs saying “Radical Islam is the New Nazi” and “Go Home & Take Obama With You.”

State Representative Mary González (D-Clint), expressed her sorrow at seeing young school children being yelled at simply because they are Muslim: 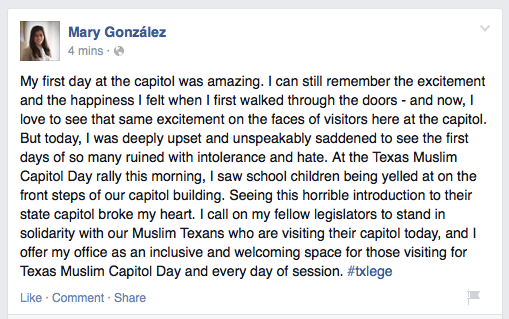 Being American and being Muslim are not mutually exclusive. Texas is home to over 26 million people from myriad backgrounds, and our elected officials have a duty to meet with them regardless of their religion, race, or national origin. This vitriol directed at Texan Muslims is reprehensible and should not be tolerated.

If you’d like to contact Rep. Molly White’s office to let her know that discrimination against Muslims is not the Texas way, you can do so here.

UPDATE: Check out these videos from the Texas Tribune. Such disrespect!