Added on April 5, 2015  Michael Bergeron  Alex Gibney , Frank Sinatra , HBO , Music , Sinatra All or Nothing at All

A wave of nostalgia washes over the viewer of Sinatra: All or Nothing At All, a four-hour documentary on Frank Sinatra directed by Alex Gibney. If you are of a certain age the memories of social and cultural history jog the brain in a kind of where were you when this happened way. If you are totally unfamiliar with Sinatra you can still relate to the meteoric rise in popularity of a singer who makes audiences swoon. 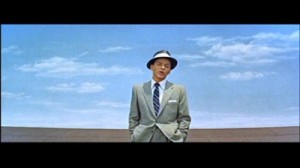 Gibney, certainly the most prolific documentarian working in the medium today (His other current films include Going Clear, on Scientology, and Steve Jobs: Man in the Machine.) presents the events of Sinatra’s life in a linear fashion. The bio bullet points are intercut with Sinatra’s 1971 “Retirement Concert” in Los Angeles, a series of 11 songs that cover his career from early love ballads like “Nancy (With the Laughing Face)” to his later standards like “My Way.” Of course, Frank would periodically return to the stage up until the mid-90s, just a few years before his death.

Sinatra’s old man kicked him out of the house when he quit school to devote himself full time to singing. Sinatra finds his first fling with fame as the leads singer for the Tommy Dorsey Orchestra, and his eventual battle with Dorsey for control of his contract. Dorsey wanted one-third of Sinatra’s salary for life. WWII finds Frank designated 4-F for a perforated eardrum, and the controversy that ensues when he’s accused in the press of being unpatriotic for not enlisting.

Sinatra’s acting career and four marriages are also held up as examples of his craft and his inability to sustain relationships in the fast lane of celebrity. Sintatra’s exes include Mia Farrow and Ava Gardner. 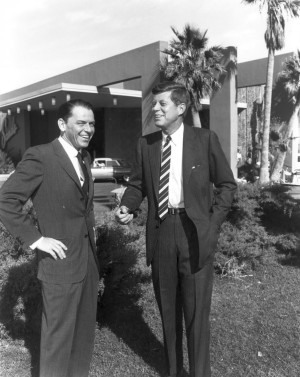 In a political sense Sinatra always supported liberal causes. Sinatra was an early proponent of civil rights. All of the minefields of Sinatra’s life have been covered in various biographies, some of which are quoted here. The Judith Campbell/Sam Giancana connection to the Kennedy presidential race is explored. How ironic is it when after the election Kennedy distances himself from Sinatra due to his mob connections? At the Kennedy Inauguration Ball he’s asked to disinvite Sammy Davis, Jr. over a matter of protocol.

There’s a wealth of found footage and news clips that keep this lengthy biodoc entertaining like one where Frank and Dean Martin sing with Elvis in the latter’s first appearance after his Army stint. For a brief moment it’s like the old guard meeting the new wave. Only the reality is that Sinatra was no longer relevant to modern pop music in the way Elvis and The Beatles were. Eventually the life long Democrat becomes a Republican and stumps for Nixon and Reagan.

On a grand scale of blind justice Sinatra did more good than bad and his philanthropy outweighs his increasing conservatism. Sinatra: All or Nothing At All premieres in two-parts on HBO, April 5 and 6 with repeated screenings throughout the month.