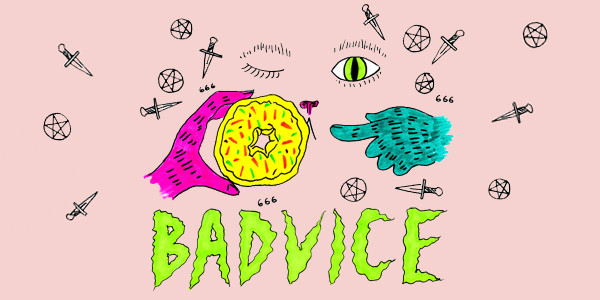 Don’t you love me? Don’t you want this? I want this. We have to do this together.

So please, submit your questions. Eavesdrop on peoples conversations and submit their questions! Shower thought questions? I’ll answer them!

who do you think did more cocaine, david lee roth or 1984? diamond dave or the whole world during 1984?
I personally think that D.L.R had a deal worked out with spandex where the more spandex he wore, the more coke he was given so the question now is did he wear more spandex than the rest of world? I’d say yes.

Deal with a relationship conundrum I recently started “talking” to a friend of mine. We’ve been friends for about 5 years. I’ve never had a connection with someone like this before and never ever would have imagined the two of us falling in this situation. The problem is he’s my ex’s best friend and he’s my best friend’s, and roommate all through college, ex. Am I an awful person for pursing this? Will we ever be able to tell our friends?

Are you an awful person? Nah. You’re about to be a lonely person though, because your friends are gonna ditch you both once they find out. There are some things that friends just don’t do to each other, and one of those things is definitely hooking up with each other’s exes. Think about if who this person is (not how big their dick is or how cute they are because skin is destined for sagging and penises will eventually become a strictly piss organ) outweighs potentially all these other people you stand to lose then be with that guy.

But you can’t deny when people say you’re an asshole because you kind of are. And by kind of I mean you are.

Dear XXXXXXXXX, you did not submit this question anonymously. Please be careful when sending in questions, because now I know your dirty little secret, and if I see you in public and we lock eyes, it’s going to be fucking weird.

Anyway, I don’t know what Pub Fiction is, but I do know what Lola’s is, and I know what kind of people like to hang out at Lola’s, and I know that I have never been due to that knowledge, so I’m gonna go out and say that statistically, you’re more likely to catch gonorrhea at Lola’s.

(BTW, this is not an attack on gay people. This is about the gross people that hang out there before you guys get your fucking panties in a twist.)

Fuuuuck, put a banana on it?