Leon casino, In Danny Collins Al Pacino plays an aging rock star. Think a kind of diminutive Neil Diamond performer; only if Diamond had only written one song we all know and love. When his manager (witty Christopher Plummer) informs Collins that John Lennon sent him a letter over 40 years ago, which was never received, it sets Collins on an emotional and post-mid-life crisis. Nick Offerman appears in an uncredited role as the rock journalist who never gave Collins the letter.

Collins decides to seek out his estranged son from a one-night stand (Bobby Cannavale, along with and his wife Jennifer Garner). Collins cancels his reunion tour and checks into a Hilton Hotel in New Jersey near where his son lives and where Annette Bening is the manager. Melissa Benoist (Whiplash) and Josh Peck (Red Dawn) also work at the hotel. Hilarity ensues. 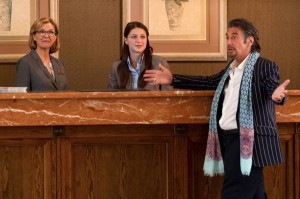 At least up to the point where Cannavale reveals that he has leukemia and is undergoing a life or death treatment. At this point Danny Collins ups the bar. The film either needs to deliver a Terms of Endearment finale or find a feel-good way to walk out of the painted corner in which it has trapped the plot.

Danny Collins is written and directed by Dan Fogelman whose previous credits are mainly as a writer (Crazy, Stupid Love, Last Vegas, a few other Disney animated features). There are some good speeches to be had, particularly a monologue uttered by Plummer regarding how his life was turned around by Collins in the early years of their relationship. And like a good chap Danny Collins actually ends with a great scene that resolves the conflicts that are left on the table.

There is a point where Danny Collins runs into an obstruction. Towards the end of the second act when Collins is going to perform live and he intends to play a new song he was been working on, one he has written with Bening in mind, instead Collins chokes and plays his hit “Baby Doll.” First of all no performer at this level would shy from playing a new song amongst their established hits. Secondly the career of Collins could not have been made on a single hit song yet that one song is all that is ever heard throughout the entire film. As good an actor as Pacino is he cannot make that unseemly plot twist work.

Danny Collins is laced with John Lennon songs on the soundtrack from start to finish.

Serena will go down in cinema history merely because it pairs Jennifer Lawrence and Bradley Cooper. Think about the films they’ve been in together during the last couple of years – Silver Linings Playbook and American Hustle. Serena was shot in concurrence with those films but is only being released now. Serena will open exclusively at the River Oaks Theatre this weekend.

Lawrence and Cooper together are like Lauren and Bacall or Tracy and Hepburn. They have that kind of movie chemistry that transcends mediocrity in the plot, script and general direction. They electrify the screen. And so we have Serena the daughter of a Colorado logging family marrying Cooper the head of a North Carolina logging company. 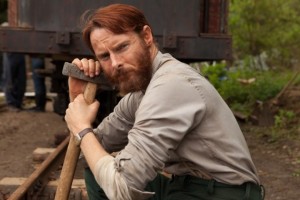 One scene has Lawrence using a trained eagle to hunt snakes that are a threat to the men cutting down trees in the forest. Another scene has Cooper, the accomplished woodsman, going mano a mano with a panther.

The action is set in the late ’20 and the sets and the cars and the dingy village where the loggers live lend credence to the atmosphere. The helmer is Suzanne Bier a Danish director who has had her share of hits (foreign films nommed for Oscars) and misses (Things We Lost in the Fire, an underrated and under seen American drama). Bier piles on the melodrama like the story is a multi-layer lasagna of deceit, crooked business deals and personal vendettas. Rhys Ifans scores points as a loyal assistant who will kill for his boss. Toby Jones plays a sheriff whose political allies want to turn the forest into a national park.

As much as Serena displays clever cinematic chops it never achieves the pacing and thematic resonance of films like McCabe & Mrs. Miller or The Claim or other period pieces set in rural American in another time. Heck, even the bootlegger thriller Lawless was more united than this. Still, years from now the allure of Lawrence and Cooper will draw people to seek out Serena. 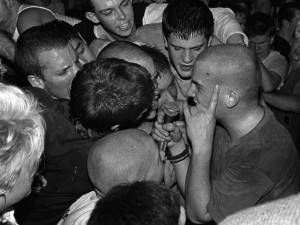 Also On: The Alamo Drafthouse Mason Park shows the DIY punk rock documentary Salad Days – A Decade of Punk in Washington D. C. on Sunday, April 5, at 6 pm. From the Drafthouse press release: “It was a decade when seminal bands like Bad Brains, Minor Threat, Government Issue, Scream, Void, Faith, Rites of Spring, Marginal Man, Fugazi, and others released their own records and booked their own shows—without major record label constraints or mainstream media scrutiny. Contextually, it was a cultural watershed that predated the alternative music explosion of the 1990s (and the industry’s subsequent implosion). Thirty years later, D.C.’s original DIY punk spirit serves as a reminder of the hopefulness of youth, the power of community and the strength of conviction.”