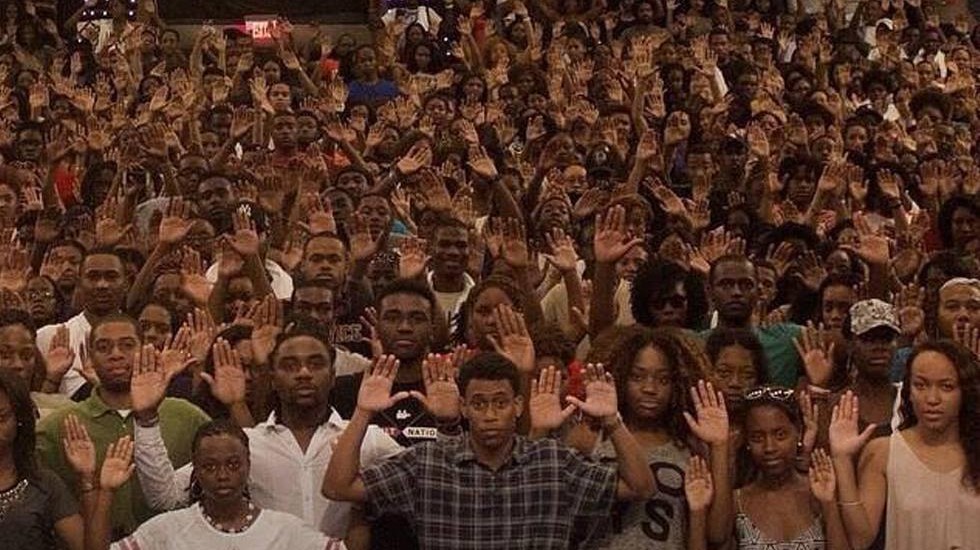 Leon casino, This is not the latest news from Ferguson, Missouri, where peaceful protests and police-instigated race riots continue for the fifth day after a police officer shot Michael Brown, an unarmed 18 year old man.  This is, rather, a summary of some of the best analyses and responses that are proliferating on the internet.

Let’s start with a Facebook status update from my friend Chris Crass, an anti-racist educator and organizer who I met in the San Francisco Bay Area 10 years ago, who now lives in Tennessee where he helps run the anti-racist education Catalyst Project. Chris wrote this on Tuesday, August 12.

Ferguson on my mind

Rioting throughout history, by oppressed peoples against injustice, has been one of the most effective ways to make positive changes in society. Regularly rioting takes places after all avenues have proved ineffective [emphasis added]. I would say that support or indifference to social policies and practices that routinely result in premature death for entire groups of people (due to state violence, poverty, substandard basic human rights such as housing and healthcare), that such support and indifference is pathologically anti-humanity. Rioting for bread, for justice, for an end to unchecked state sanctioned murder of Black youth, is often done at great risk, often provoked or started by police, and is often the result of courage to no longer be ignored in the face of socially sanctioned annihilation. From the Warsaw ghetto uprising, to the Soweto uprising, to the Watts riots, to the Rodney King riots, to Ferguson. I believe in non-violent direct action and grassroots community organizing, but there is also a place for people’s uprisings against injustice, in unbearable conditions, like what we are seeing in Ferguson.

For all who denounce rioting and those engaged in it, the most important question isn’t “what is your opinion on this response to injustice?” but rather “what will you do to end the injustice?”, followed by “what is your responsibility to the communities suffering these injustices?” 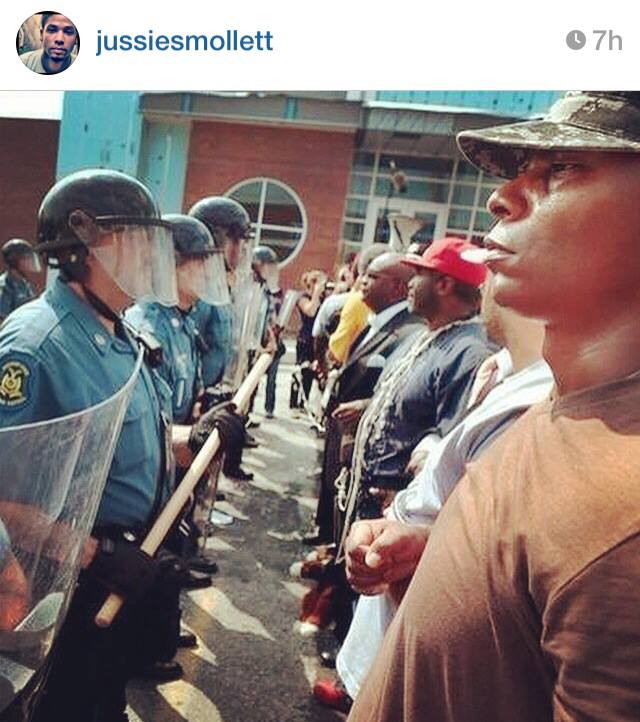 Ferguson and Resistance Against the Black Holocaust

The people fighting back in Ferguson are heroes, who deserve our respect, gratitude, prayers, and acts of solidarity. The people of Ferguson who are fighting back, in many different ways, have forced the country to look into the face of the enduring reality of the Black holocaust that began with the first Africans kidnapped and sold into the slave system.

The choice everyone must make is whether or not we will be Hitler’s “Good Germans” who tacitly gave their support to the Nazis and decried the animalistic Jews who fought back in Warsaw? Will we be the Slave Society’s “Good Americans” who may have quietly and privately thought slavery was immoral but spit venom decrying the “irrational” and “counter-productive actions” of Nat Turner and slave uprisings from the 1600s-1800s. Will we be the well-intentioned, and often unintentional, defenders of misogynistic violence who decry those who fight back when they are being assaulted? [Emphasis added.]

The people fighting back in Ferguson are, right now, provided the greatest hope for winning and creating a society in which Black families and communities are no longer - routinely and devastatingly - subjugated to daily structural inequality in every sphere of life, appalling racist violence by the state and individuals, and the degradation of white condescension and indifference.

Will you stand with the people of Ferguson, by directing your pain and outrage at the real enemies (the Ferguson police department, and all levels of government backing them) and do all you can to support the fight for racial and economic justice? Or will you choose, through actions or in-actions, to continue the shameful history of those who have let evil reign and only condemn those who oppose it - because it isn’t the right time or being done the right way?

The people of Ferguson did not create this crisis. Centuries of white supremacy, a police system evolved out of the slave patrols, unchecked state violence against communities of color, mass incarceration of over two million, epidemic poverty, and the murder of a teenage boy named Michael Brown created this crisis. The people of Ferguson have created hope and possibility, through their resistance against the nightmare of the Black holocaust, that another world is possible. Do you stand with them? Or do you give your support, well intentioned or unintentionally as it may be, to the enduring reality of the Black holocaust? [Emphasis added.]

Jacobin Magazine has published a defense of the rioters, called “In Defense of the Ferguson Riots” with the subheading “The protesters in Ferguson aren’t irrational or apolitical. They are calling attention to their basic, unmet needs.” It’s short and full of great analysis—I recommend reading the whole thing, but here are some highlights:

Far from a mindless, violent mob, the people of Ferguson were engaged in concerted political consciousness-raising leading up to the insurrection. A video taken at the scene shows a number of political agitators talking with the crowd, converting momentary outrage into political unity. One speaker in particular, a young black male, offers a cogent political analysis that frames the injustice of police brutality as a byproduct of the community’s economic dislocation.

We’ll get into some of that economic dislocation below, with quotes from the St. Louis American newspaper, but the Jacobin piece goes on to challenge claims that the presence of protestors from outside of Ferguson somehow delegitimizes the protests.

The outrage in Ferguson quickly attracted marginalized people throughout the region. Rather than evidence of illegitimacy, the presence of these “outsiders” reflected the magnetic power of the political moment.

The fact that people from neighboring suburbs and even from out of state have felt moved to bear witness and participate in this uprising speaks more to the universality of the grievances—military trained police officers acting with impunity, waging war on American communities on American soil.

Following the insurrection, participants continued to discuss the uprising in political terms. DeAndre Smith, who was present at the burned down QuikTrip, told the local news, “I believe that they’re too much worried about what’s going on to their stores and their commerce and everything. They’re not worried about the murder.”

The St. Louis American, a weekly newspaper representing serving an African American audience in St. Louis and the surrounding areas (such as Ferguson) provided some information on the broader economic crucible in which this uprising flared up:

North St. Louis County and many of its municipalities have suffered decades of economic disinvestment, loss of manufacturing jobs and disruption by highway construction and airport expansion. Those who chose to stay in these ring suburbs, or who had no other options, had to live – or die – with the consequences.

White flight, particularly to St. Charles County, first hit the school districts, then the tax base. Remaining homeowners are heavily taxed in areas with often struggling schools, little industry and dwindling businesses and services. The mortgage bubble really burst in these areas, with rampant home foreclosures…

As for our youth, many of them may not be properly educated, but they are not stupid…

Indeed, it is plain to see everywhere. I don’t want to diminish or dismiss the suffering and disruption to the lives of shop owners effected by these riots, let’s just examine them in a larger context. How do these relatively minor (emphasis on “relatively”) acts of looting compare to the looting of our whole country by Wall Street?

Don’t tell me about “rule of law” vs “mob rule” or “rule of the jungle” when the biggest criminals don’t walk but STRUT with impunity on their yachts and golf courses.

The bankers and lawyers and politicians who brought our country to its knees in the biggest economic downturn since the Great Depression did not go to jail, they didn’t even get fired. They got bonuses from taxpayer-funded bailouts! First they robbed the pension funds and savings of working people across the country, then they got promotions and the biggest bosses got seats on Obama’s cabinet and “regulatory agencies.” 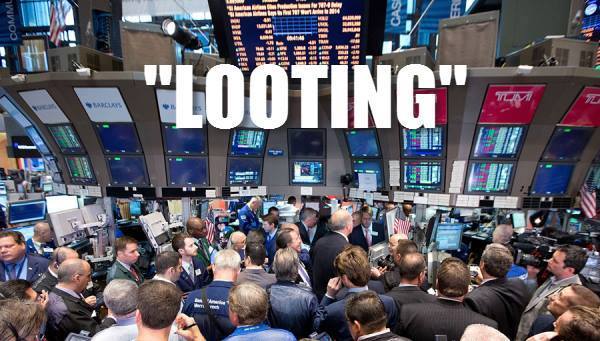 “Let’s not forget who the real looters are.” via US Uncut

The youth, indeed, are not stupid. They may not have the best words to articulate what they know, but they know they are getting screwed. They know that when apologists for the status quo talk about the “Rule of Law,” they know what is meant by the “Law” that rules.

What the “leaders” at the top need to recognize is that if they want the “Rule of Law” to be respected, they have to apply it equally. And if you’re not going to apply it equally, then shut up about somebody stealing a loaf of bread or a soda can when you have sociopaths on yachts and golf courses walking around with elderly people’s whole life savings in their back pockets.

Instead, as Robert Stephens II points out on Jacobin, people watching from afar make calls for “respectability,” to “work within the system,” as if phone calls to elected representatives and impotent petitions ever made a change.

Most detractors, some of whom are black themselves, seek to police these communities with “respectability politics” — a call for subjugated people to present themselves in ways that are acceptable to the dominant class in an effort to make political gains.

Those same, civilized people conveniently forget that the Founding Fathers they love to tout were themselves vandals-dressing up like people they considered savages (Indians) and dumping private property (tea) into Boston Harbor. This country was founded on property destruction. 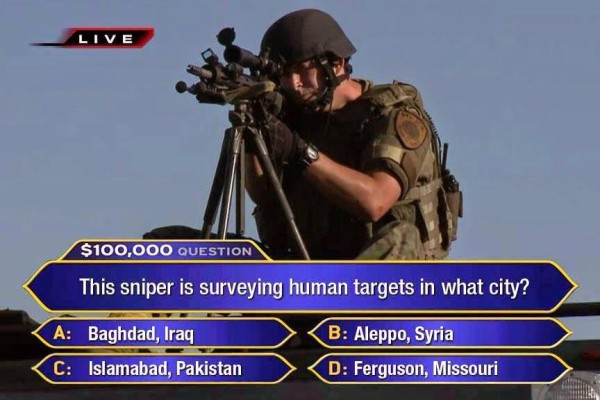 via The People’s Voice

In response to some of the shocking images of a militarized police force repressing US citizens on US soil, many people are using this as an opportunity to discuss the militarization of police departments across the US in response to overblown fears that were cynically exploited in the wake of 9/11 (Remember the Patriot Act?). 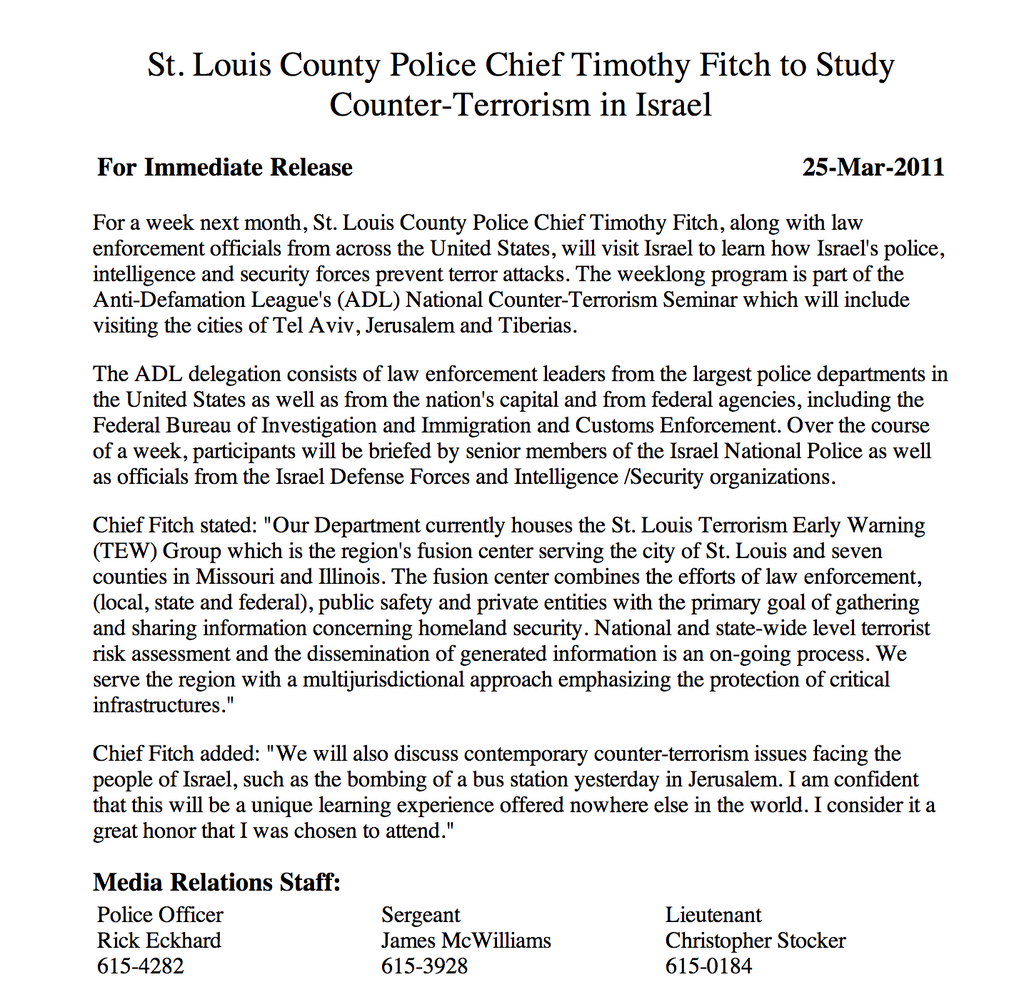 Meanwhile, in New Orleans, police shot a man with warrants (for a non-violent marijuana offense) in the head and held two press conferences where they neglected to mention that they had shot a man.

“‘Clearly, it fell through the cracks,’ [Superintendent Serpas] said.”

Hold up, homie! Define “it.” What fell through the cracks?

The police chief gave two press conferences since the shooting, and didn’t mention it at all. The superintendent now has the nerve to call it a ‘snafu.’ There are three possible explanations for this incident: 1) The NOPD was trying to cover it up. 2) The leadership of the NOPD is so incredibly incompetent, they forget about shootings. 3) They care so little about Black lives, that when they shoot someone in the head, it literally doesn’t even register as important to them.

What is more disturbing here—that the police shot someone and thought so little of it that it slipped their mind, or that they consider this a “SNAFU,” i.e. “situation normal, all fucked up?” In other words, the NOLA PD is saying, “Yup, we messed up like we always do,” shrug, “heh.”

A long time ago, I read somewhere (and I really wish I could remember where) that “If you want people to respect the law, first you must teach respect to those who enforce the law.”

The cop who shot Michael Brown was a jerk on a power trip. Are those the people “we the people” want as our gun-toting representatives? How can we expect the public to respect the law when even the cops don’t respect the law? Who will police the police? 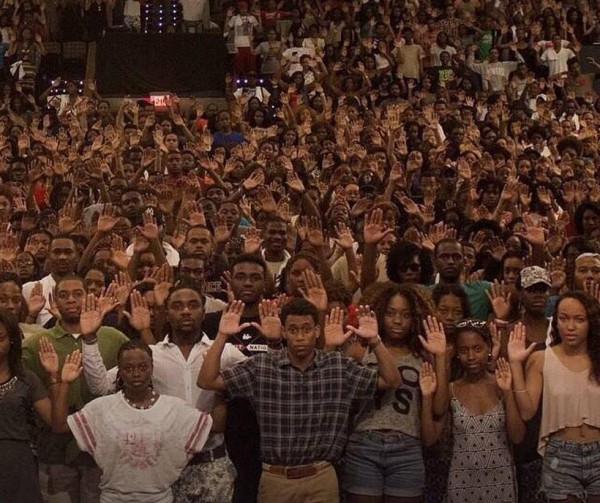 [UPDATE: It has been brought to my attention that the St Louis County police chief who was trained in Israel retired last year. The point stands, however, as I am sure his influence is still felt in the department.]

One Response to A Compendium of Analyses on the Ferguson Uprising