Blogging while intoxicated: Goodbye and Good riddance to Rick Casey and Steven Thomson 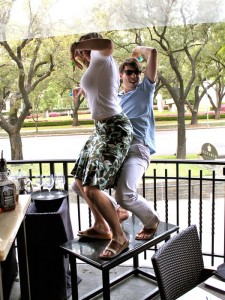 See the man in the white pants: he is the enemy (appropriated under fair use provisions)

Houston media is a small, and always getting smaller, community. It’s not uncommon for Free Press Houston, Houston Press and 29-95 writers to share some words and a drink when we run into each other at a show or a bar. Over the years I’ve tried to remain cordial with my colleagues in the big corporate papers and when they left for greener pastures I felt that some of the things that made this city great had left as well. That is not the case this week. The Houston Chronicle’s “Metro Columnist” Rick Casey will be publishing his final column before heading back to San Antonio to head up a Texas politics based talk show, because they apparently watch those things in the home of the Alamo. In the eight years that Casey has had his name in the Chron he’s been accused of ripping off other journalists and almost always missing the story. I literally cannot count the amount of times I have been stupefied by how Casey completely seemed to miss the most important element of whatever he was writing about and did so in such a profoundly unfunny way that it made me wonder if 8 a.m. is too early to start drinking.

Despite Casey’s shortcomings, he was at least attempting to say something with substance. The same isn’t true for Culturemap’s Steven Thomson who is leaving to do something or other in London, the post wasn’t quite clear. For those unfamiliar with Thomson, and why would you be, he was the site’s assistant editor and wrote the insufferable ‘column’ Trendysomething in SoMo. After being the only person in Houston to A: identify South Montrose as a cultural and geographical area separate from say, the Museum District or the rest of Montrose and B: coin the irritating acronym SoMo to describe it, Thomson’s writing offered an unapologetic, unironic and unappealing look at the life of either a trust fund kid or a $40,000 millionaire. He wrote for, and about, the young town home dwellers who seem to want to take a community and an area of town so well-known that it gave it’s name to a gay bar in South Texas and make it into something that resembles Aspen east or, fuck I don’t know, Manhattan’s Upper East Side.

Thomson’s lack of knowledge about the city he chose to live in couldn’t be more apparent than when he described the work of legendary Houston anti-art collective I Love You Baby, as “cartoon meets porn doodles.” It wasn’t just Thomson’s general lack of knowledge that launched much of his writing straight past infuriating to the land of downright insulting; there was also his tone deaf approach to the issues faced by a community he chose rechristen from “the ‘Trose” to the “hipstrict.” The rage inducing aspect of Thomson’s writing came partly from his complete and utter failure to acknowledge the struggles with identity and assimilation that have defined Montrose for 40 years but mostly from his treatment of substance abuse.

Take the April Fools’ joke about “being caught in a purple syrup swirl and sent off to rehab in the Rio Grande Valley.” Yes, because those of us who have lived in your “hisptrict” for longer than two years, and have lost friends to drug addiction and rehab, find the concept of a privileged white boy being hooked on the oh-so-declasse  codeine syrup so fucking funny. I’ll be sure to recount the tale of your fake Shelby Hodge intervention to my friends facing 3-5 years for possession of a gram; I’m sure they’ll find it hilarious. Sadly, his April Fool’s piece wasn’t the one that made want to hurl my laptop out a fourth floor apartment window; that reaction was reserved for a piece published on April 15 of this year.

While the vast majority of Houstonians were slaving over their tax returns Thomson had the gall to describe brunch at Hotel Zaza as “a portrait of post-recession Houston.” Yes, Steven, the recession hit us all so hard that we can now only enjoy our “succulent Alaskan halibut with saffron-braised summer squash” and “brioche French toast bites dipped in vanilla bean maple fondue” as a way of showing solidarity for the “tiny black dress-decked waitresses” who change costumes midway through service into that of “delinquent school girls (cigarette-emblazoned blazer crest included).” Viva la Revolucion! I know when I hear someone say “this Cava is good, but not as good as the winery I stayed at in the foothills of the Pyrenees,” I think about paradigm shifts in Houston demographics, the economic devastation of middle America and post recession culture. Just like when I go out to eat and drink with my friends and wind up dancing on a table I always try to dust off my liberal arts degree and justify the decadence by writing a think piece about how the brunch scene is “an indicator of the city’s zeitgeist.” Methinks someone was reading a little too much Jay McInerny and Bret Easton Ellis while waiting on a mani-pedi, but didn’t get to the part about the emptiness of materialism.

If Casey’s articles made me wonder if 8 a.m. is too soon to start drinking, then Thomson’s writing proves it’s never too early for a shot of whiskey; and that’s not a good thing. And Thomson, since I know you’re reading this because you’re an egotistical wanker, if I see any of this on a book jacket in a few years I will personally punch you right in your smug little face. Now I need a goddamn shot.

26 Responses to Blogging while intoxicated: Goodbye and Good riddance to Rick Casey and Steven Thomson