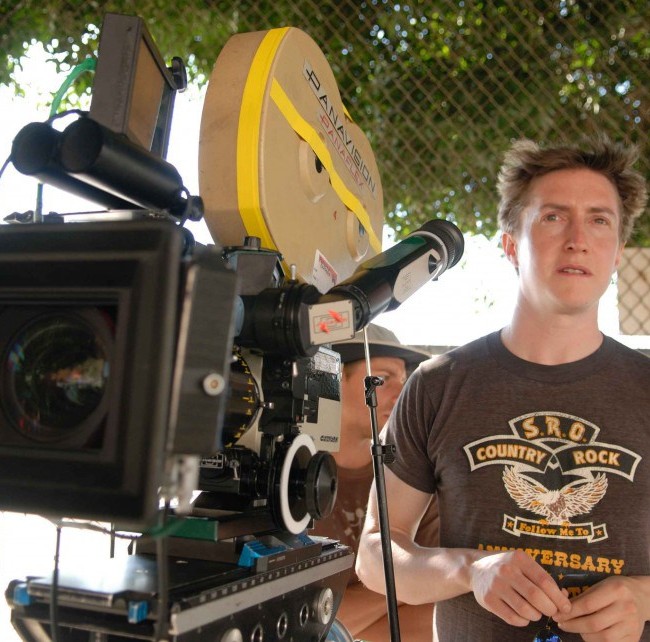 Characters who’ve been marginalized by a society they once embraced are a recurrent image in the movies of David Gordon Green. With a dozen films as a helmer to his credit, many of them as different from one another as their genres and budgets would suggest, his last three have noted actors playing people reduced to the periphery of life.

That would be Paul Rudd in Prince Avalanche, Nicolas Cage in Joe, and Al Pacino in Manglehorn, which form a kind of Texas trilogy. “Previously I had met Al socially. A bit later I approached him with the script and said ‘remember me?’” Green says to Free Press Houston in a phone interview.

Green is promoting Manglehorn, which opened theatrically on three screens (June 19) as well as via online streaming or VOD, even while also previewing his upcoming film Our Brand is Crisis. The two films illustrate the creative span of Green’s movies. Manglehorn was shot as a small indie film on a relative shoestring budget in Austin. Our Brand Is Crisis features international locations and is produced by George Clooney and Grant Heslov’s Smoke House Pictures through Warner Brothers and stars Sandra Bullock.

“There’s a lot of homages to roles Pacino has played,” says Green about Manglehorn. “There’s the handbag that he carries in Serpico, also the earring from Serpico. Some of the art direction in the bank scene was copied from Dog Day Afternoon. The same flowers like they use in Sea of Love. It was like a love letter to Al that we used all these Pacinoisms.”

An Austin resident, Green utilized talent from the capital city including neighbors like screenwriter Paul Logan and music from the band Explosions in the Sky.

“What’s funny is that restaurants in Austin that I’m a regular at – all of a sudden I walk in one day with Al and everyone does a double take. ‘Why are you with that guy?’ Of course wherever we shot we drew a lot of attention,” says Green. “Pacino would just sit in his chair in someone’s yard and read the paper, or talk to the neighbors. He made himself right at home.”

One of the locations was a boat graveyard just east of Austin that Green also used in Joe. “It wasn’t in the script but when we were putting all of Manglehorn’s stuff in a boat we thought it would be romantic to put it to sea.”

Manglehorn lives a quiet life as a locksmith and pines over unrequited love. Manglehorn keeps a secret room in his house where he stores returned letters in little shelves that are like the key shelves in his store. Coming to a realization with his obsession Manglehorn takes all the letters and photos and related ephemera and puts them in his boat that he never uses and gets rid of everything. “I worked with my regular production designer and prop master to create a world and give Pacino ideas about his character, find a world that has the right history and texture. Someone else said what if we threw the boat in the trash, and then I thought of the boat graveyard we used in Joe, it was an improvised idea,” says Green. 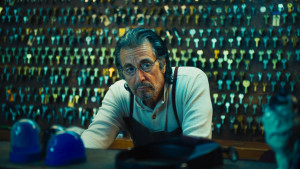 Manglehorn lovingly tends to his cat, a fluffy white haired feline that one-day inadvertently swallows one of his keys. “We cast a cat that needed to get spayed. We learned through our technical consultant Dr. McCloud that that was a similar region to the laparotomy procedure.

“When he was explaining how the procedure would be done I kind of fell in love with his passion and love for animals so I put him in the movie and filmed the process,” says Green. “In some ways it’s a grotesque expression of love, it’s hard to look at, but it was with the upmost technical and scientific affection that you would be able to perform something like this, and consider the animal’s well being. And it’s definitely something that a guy like Manglehorn has to contend with. His son wants to borrow money and Manglehorn can’t loan him any because he’s prioritizing his cat’s health.”

Earlier in Manglehorn, Pacino and the cat go for a stroll and happen on a bizarre bloody automobile pile-up. Only the blood turns out to be smashed watermelon from an overturned truck. The scene unwinds in a long take that pays homage to a famous tracking scene in Godard’s Weekend.

“It was not intended to recall Weekend but we literally had an hour-and-a-half to film the scene. It was a run and gun 20-day shoot. We were racing to get the scene done. I wanted to shoot it in good light so it was the economical choice to just lay the track down and shoot it in one shot,” says Green. “Much of that scene had been dressed the night before so when we got there in the morning all we had to do was smash a bunch of watermelons.”

On raising money for indie film, Green explains that the real value for a film like Manglehorn is in Europe. “I get financial estimates of what we can sell the film for in Germany and France and Italy, the UK and other territories in Europe where it’s going to have the majority of its theatrical life. And then make the film for 75% of that. When you make an independent film your romance has to be the red carpet of film festivals,” says Green. “In Europe there is a significant theater going public.”

Green has directed films as diverse as All the Real Girls, Undertow, Snow Angels and Pineapple Express. In the recent Seth Rogen and Evan Goldberg film This is The End, as part of the movie’s plot, a sequel to Pineapple Express is made ad hoc on video, “It was a very funny movie and I was on the set when they were doing it,” says Green. “But the funniest part was that they called me, worried that I’d be insulted that they were making fun of it.

“It’s weird. Certain people like certain films that I’ve done, and my work resonates with certain audiences. But I’m curious about the few folks that have stuck through all of them. Not every movie is for everybody, and I’m okay with that,” says Green. “I’m the directing version of a character actor.”

Ballad Of Lemons: The Best of The Week

It’s all in the title