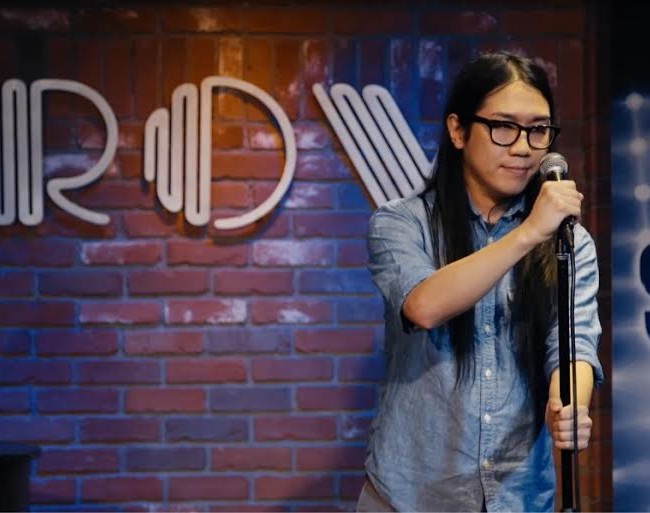 Not since the days of Houston’s famed Comedy Workshop has the comedy scene here felt so electrifying and full of talent.  Right now, there are more comics doing things  and going places than in the last twenty years.  One of those comics is John Nguyen.  Nguyen won the Laff Town’s Funniest Comedy Contest in 2014, as well as beating thousands of comics from all over the country to become a finalist in the Stand Up NBC contest.  Becoming a finalist has landed him touring work, a possible deal with NBC on future projects, as well the respect of his comedy peers.  Around town he’s been in both the Come And Take It Comedy Festival and Houston’s Whatever Fest, as well as grabbing opening spots at the Improv.  FPH caught up with him to find out more about who he is and where he’s going.

FPH:  You’re from Houston right?  How long have you been doing stand up?

JOHN NGUYEN:  I’m actually from Somerville, New Jersey, and I moved here in the early 2000’s.  My mom and dad got divorced, and my mom asked if I wanted to move here with her, so I did.  I’ve been doing comedy for three years.

FPH:  You joke a lot about your parents and their vision of a life for you other than the one you’ve chosen.  Do they really want you to be a doctor or do they support you doing stand up?

JOHN NGUYEN:  That joke is actually true, my mom really doesn’t know that I do stand up.  She knows that I work at the Improv, but that’s about it.  I started to explain it to her once, but she didn’t really understand, so I didn’t try to explain harder.  She mentioned that I could be a successful lawyer or a doctor, but ultimately, I think she just wants me to be successful at something.

FPH:  You come off as the most humble comic in Houston.  I see you’ll get on a show and you’ll post how you “don’t know why they chose you,” for the show.  Or you’ll say that you “only have 15 minutes of material.”  You don’t see yourself as a strong comic?

JOHN NGUYEN:  I think I just don’t have enough material.  If a joke isn’t up to par by my own standards, then I won’t put it in my set.  But, I’m also my own worst critic.

FPH:  You had a big 2014 as a finalist in the Stand Up NBC competition and you beat a pro to win the Laff Town’s funniest competition, as well.  What did that feel like?

JOHN NGUYEN:  The NBC thing was totally surreal.  I remember being in my hotel room in Hollywood and thinking, “This is not real.”  On the Laff Town contest, I mean, obviously Rob Mungle is a better comic than me.  I think just the general bullshit vibe of a contest makes things different.  The way Steven [Padilla] set it up — with two nights of finals — really made it more of an even playing field.  Everyone had great sets; I just lucked out.

FPH:  Louis CK recently said, “Whether it’s a room of 15,000 or a room of 15, a comic will always find the people who are disappointed.”  As a guy who has played bigger rooms and smaller rooms, do you feel like that’s true?  You have such a stride to your act that I can’t imagine you even noticing them.

JOHN NGUYEN:  I can’t speak for a room of 15,000, but I know what he means; and yeah, I can always find the disappointed people.

FPH:  Favorite comics of the past, and of the present?

JOHN NGUYEN:  It was really only George Carlin from the past.  I’d listen to my friend’s dad’s records, and not get any of it, but laugh at all the swear words.  From current comics, I really like the way Conan O’Brien writes, and I really like Pete Holmes, John Mulaney, and Louis C.K.

FPH:  As a demographic, there doesn’t seem to be a large number of Asian comics.  What about stand up drew you to doing it?

JOHN NGUYEN:  Well, certainly not my mother, but seriously, it came from Louis C.K.  I discovered his stuff, and I looked up all of his clips to check his stuff out.  I saw him at Bayou Music Center when it was still called Verizon, and it changed my life.  Watching him really made me want to try to do it on my own.

FPH:  No one in the Houston comedy scene will say a bad thing about you, and most would put you at the top of the list of newer comics.  Do you think that’s due to the fact that you don’t hang out as much or that you don’t get involved with a lot of the gossip and drama of the scene?

JOHN NGUYEN:  I think that there will always be drama whenever there’s a group of people who hang out together, so it doesn’t necessarily apply to just the comedy scene.  But, if I hung out more, maybe those guys would get to know the real me, and end up thinking, “Hey, he’s just another asshole like us.  He’s not humble at all.”

FPH:  What’s your definition of a successful comedy career?

JOHN NGUYEN:  I think having my own sitcom like Seinfeld did, but calling it Nguyen.  And then going ahead and stealing the music he had on the show with the same premise.  You could be in it and be Kramer, because you’re tall.  Or, well, actually you’d make a better Elaine, but in drag.  I’d also like to insist on an alternate pronunciation of my name just to confuse America.  That, and that alone, is my idea of a successful comedy career.

You can learn a lot from a guy who’s as humble as Nguyen.  When you speak to him, you realize that while he’s gotten plenty in his short time at a mic; he’s nowhere near satisfied with himself as a stand up.  You can catch him on June 19th when he features for Iliza Shlesinger at Warehouse Live.  The all-ages show has doors at 7:30 and tickets are $20.00.

We Were Wolves Are Ready To “Ruin Your Weekend”