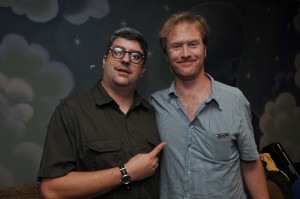 10 years ago Dave Willis did an amazing thing. He and his writing partner convinced a major television network to run a show about a sadistic milkshake, a carton of fries with supernatural powers, and an endearingly dim wad of meat. To the surprise and amazement of all parties involved, Aqua Teen Hunger Force has become one of Cartoon Network’s most popular shows and has even been made into a feature length film. Since then, Dave has successfully produced and voiced several more shows for Adult Swim. Teaming up Dana Snyder, who provides the voice of “Master Shake” on ATHF and “Granny” on Squidbillies, the duo have embarked on a tour of the U.S. to bring the absurdity uncomfortably close to you. I caught up with Dana and Dave early on a Saturday morning to talk some shop about Adult Swim and prepare myself for the inevitable weirdness that will ensue on April 16th at their House of Blues gig.

FPH: How would you describe your TV shows to someone who has never seen them?

DAVE: Well they’re intensely plotted, and the story actually spans over many seasons…

DANA: There’s always some exciting resolve at the end…. 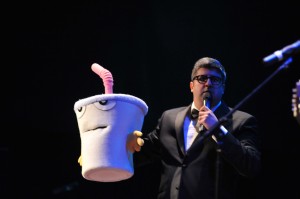 DANA: Both of things that he just said.

DAVE: And intensely adult situations, but perfectly suitable for children as well.

FPH: What’s the process like when you start a new episode, does it change from season to season?

DAVE: Uh, it really comes out of boredom, like most stuff. We had one year we were just going to have the characters not be in the show, for the whole season. The star was gonna be the house ATHF lived in, and then new people were gonna move into the house and then over the course of the season they would become the Aqua Teens, but then we were told that we would be fired for doing that.

DANA: I have to agree. That’s actually bullshit, Dave, because I don’t wanna not have been in it all year.

DAVE: Yeah, then there’s a giant middle finger to anyone who cares about us.

DANA: We would have gotten into George Lucas territory at that point.

DAVE: But I tell you one thing- we’re going back to the ATHF being detectives. we’re writing a lot of crime stories right now.

DAVE: I think we’re actually changing the name of the show to Aqua Unit Patrol Squad though. We’re gonna shake it up, we’re gonna add the smoke monster too.

FPH: So the suits were right, you’re going back to the formula they wanted originally.

DAVE: We’re going back to the formula they wanted, and it took us ten years to figure it out.

FPH: Dave, I read that you were originally from Wichita Falls, did you live there for any amount of time?

DAVE: Ahhhh, you found my Wikipedia page too. Hey can I ask you to please change the photo on that?

DAVE: I look like Frankenstein. I’m not so vain that I’ll do it myself but I am vain enough that I will ask you to do it.

DAVE: I look like a monster from the grave. Like I had risen to feast on your brain. No, …uh yeah, I was born in Wichita Falls, my mom is from McKeeny, which as you well know is right by Iran, Texas. I’m actually in Dripping Springs right now. We’re going to record Jimmy del Gilmore for Squidbillies, and his amazing saw player from those flatlander albums, so it should be an interesting little trip here.

FPH: Speaking of Squidbillies, did Texas provide you any cannon-fodder for writing for Squidbillies?

DAVE: I think anything on this latitude line from Texas all the way across to the Atlantic coast of Georgia- there are morons that inspire our scripts, so yeah, no doubt, no doubt. But yeah, I spend a lot of time out here- west Texas you know. And some time in Austin. We’ve hit the South by Southwest a number of times.

FPH: The voice of Early from Squidbillies is done by eccentric singer songwriter Unknown Hinson. What’s that like?

DAVE: It’s terrifying. He brings a lot of firearms to the studio, he cajoles and when he doesn’t get his way he threatens. You have to have five bottles of Crystal Geyser spring water next to the microphone, or he’ll pistol whip you. Five unopened bottles. Can’t be four, can’t be six. Labels fronted.

FPH: Is there anyone in particular that influenced any of the characters on Squidbillies or Aqua Teen Hunger Force?

DANA: I have one. I have used the voice of Diane Rehm from NPR as my inspiration for Granny- She has this weird, I don’t know what the word is, what do you call it-affectation, some kind of….. it’s not a disease- it’s like a thing that she does, she can’t control her vocal chords. She just doesn’t have control of them, so as a result, she’ll talk like this (erratic accent) and uh, yeah. That’s what Granny does: like the air is coming out faster than she can actually control it.

FPH: I’m glad we scooped that.

DANA: You didn’t know you were going to be an investigative journalist today, did you? Blowing the lid off Squidbillies.

FPH: And I guess the voice of Master Shake- he’s kind of like an insult comic?

DANA: (voice of master shake) “I’ll tell you what he is!” Yeah, that’s where I garner a lot of my enjoyment from- from classic comedians.

FPH: Who is the most exciting guest you guys have had on the show?

DAVE: Most exciting? Hmmmmm… Most terrifying?

DAVE: It’s probably in our other interviews and stuff but I think Glenn Danzig was still… Still an adrenaline rush to argue with him over the phone. And I know that he’s probably standing on a desk, all four foot ten of him, with a goat skull belt buckle, explaining why his character needs to be “more cut than that.”

DAVE: Finally my animator had to have an intervention with me and he was like, “I cannot add more muscles, it would make him look ridiculous”, and I said, “Well look, he’s got approval on how he looks and he said he’s more cut than that.” And he also said, “I look small”, and I’m like, “Yeah, well you’re on an eleven inch sheet of paper…”.

DANA: Yeah, we’re not giving you the drawing in life size here.

DAVE: Oh yeah, and then he looked 6’4″, which is like twice his size… I was like yeah, we’ll put you next to R2D2 and he’ll be like up to your knee. There, now you’re a giant. We ended up drawing a picture of him hanging off the Empire State Building.

FPH: There are a lot of musical references in ATHF. What kind of music do you guys like to listen to?

DAVE: There you go Dana. Dana was like “I think that’s a lie, I don’t even think a band exists with that name.”

DANA: No no no, they’re not famous, Elvis is famous. Hot Chip I’ve never heard of.

DAVE: Yeah, but the only thing you listen to are like novelty records and things that you get out of a vending machine.

DANA: That is true.

Dave : Yeah, we just recorded Lucinda Williams for Squidbillies, we got a bunch of good people, Gillian Welch, Bonnie Prince Billy and some others. But yeah, I don’t listen to much Hot Chip. I just thought it was pretty amazing that technically we opened up for them. I listen to only old music. I don’t know anything new or modern. The older and weirder the better. And of course, on Aqua Teen we recently had Chickenfoot: Sammy Hagar’s super group,

FPH: Speaking of Sammy Hagar, Van Halen. They had their infamous ”no brown M&Ms in the green room” contract rider. Now that you guys are on tour, how do you guys plan to push your weight around?

DAVE: We have a rider that insists that both of us receive a massage with raw Ahi tuna, right before we go on stage actually, so, you know. We’ll see how the venues respond to that.

DANA: I like to request buckets of Miller Lite beer.

DAVE: That’s right. If you see us, just hand us a Miller Lite. I think I’ve learned from you that’s just got a little more kick than water, you can drink about twenty and still remember the lyrics, and what you’re supposed to be doing.

FPH: Do you think that the success of ATHF has helped —

DAVE: — helped other people with shitty ideas to get shows made?

DAVE: Of course! It’s wonderful. I feel like we just shattered the glass ceiling for idiots with terrible ideas everywhere.

FPH: Now, I read online that Dave went missing for a while, can you guys tell me what happened?

DANA: Dave has a number of properties around the world… (laughter)

DAVE: Yes, I’m an international slumlord. Well what I actually do is I provide low-income housing for people in, you know, “special” financial situations where they can’t afford to pay for housing. I use that as an opportunity to trap them in a situation where I can sue them.

DAVE: And it really has nothing to do with money, it’s all, it’s because I get a psychological rush… From uh, from crushing the poor in my fist. My mighty fist.

FPH: You guys have shot the show in live action, what can we expect next? Is there an Aqua Teen Hunger Force 3D in the works or anything like that? 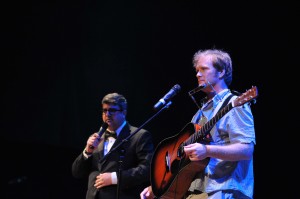 DAVE: I feel like 3D is so over. I mean, it’s been done and it’s been done to death. We’re going to go in 5 dimensions; a circle of time. You don’t even know what the fifth dimension is because we haven’t invented it yet.

DANA: Basically what the fifth dimension is- we’re working on sort of a pattern of light that when it enters the iris- it will immediately make you void your bowels.

DAVE: But you have to wear this very dangerous, prototypical, $35,000 neoprene suit to cover every square centimeter of surface area on your skin, to get the full effect.

DANA: We didn’t really think about the clean up costs involved. The theater was not pleased.

FPH: What can we expect to see throughout this tour for the live show?

DAVE: Carl’s gonna be there, he’s gonna tell you why Houston sucks, as he does in every city on the tour. He doesn’t hold it over Houston, it’s not personal; if it’s not Jersey, it sucks. Granny will be there, providing some home cooking demonstration; we’re not going to delve into what that is.

DANA: That’s cooking with an i-n apostrophe; no ‘g’ on that. 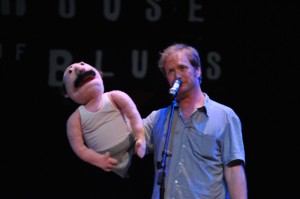 DAVE: Yeah, home cookin’, read into it as you will. Uh, the ‘show me your meatwad’ competition, we’re performing comedy and songs and jokes and never before seen stuff from Aqua Teen and Squids that we’re gonna sort of premiere in front an audience. It’s a- whatever you say, don’t say that we’re reading scripts, I don’t know how that gets out there. That makes it sound like we’re sitting on folding chairs.