There is no good, there is no bad – there is just what it is. And so it goes for The Interview, a movie that has been getting so much free publicity as a news item alongside other noteworthy items as protests over police brutality, slain officers and Russia canceling holiday vacations for Kremlin officials. You couldn’t buy that kind of publicity. So when the film that nobody ever thought they would see was actually released people scrambled to watch it at one of three-hundred movie theaters as well as online for $6-and-change.

People who normally don’t watch movies much less the R-rated type of films that filmmakers Seth Rogen and Evan Goldberg specialize in want to see this movie. In all honesty, The Interview trails behind some of their previous efforts like Superbad and This Is The End. Rogen and Goldberg wrote and directed the latter film as well as The Interview.

The Interview is a case of not being about what you like but rather standing as a symbol of free speech. It’s an odd duck cinematic event that unites conservatives and liberals. In the end perhaps it’s much ado about nothing. 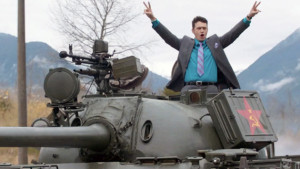 Rogen and James Franco star as a television producer and the egotistical host of a celebrity talk show. Parts of the film are genuinely funny, mostly during the set up as we observe the character traits of a team that’s been chosen to interview the leader of North Korea. Other parts of the film seem to drag with butt plug humor, Siberian tigers, and fingers being bitten off. Rogen and Franco display a fine charismatic chemistry no doubt fueled by their work together since Freaks and Geeks. The duo is a Martin and Lewis for the new millennium, one straight man and the other dude way over the top.

One thing is certain: The Interview will go down as one of the strangest footnotes in film history. A symbol for the very thing it set out to parody.

Born To Mack: The Best of The Week

Bootown: Death on a Roller Coaster