Leon casino, Let me tell you how Jeff Fest went down.

Let me tell you how it went down because I never got to meet Jeff Clyde Hunter. So let me tell you about Jeff Fest. Everyone who packed Avant Garden Friday for the party/memorial/party/ceremony/vigil knew Jeff Hunter, or would fill in everyone who did not. Everyone who was there was there to celebrate him. And everyone there did so with the force of 10,000 suns.

There was too much going on to take it all in. There were too many bands to see them all. Whit. Giant Battle Monster. Devil Killing Moth. Kosé. Space Villains. Say Girl Say. The list went on. And they all had memories to impart about Jeff. Not to mention both floors played simultaneously. Not to mention live art outside. Live performances from deranged clowns and stand up comedians. Open Mic. Art bidding. Lone Stars and Shiners and White Russians for cheap. Everything Jeff would have wanted, they all said.

“We’re sorry to be here. Shouldn’t have to be here for this occasion,” they said. “You can hand out free hugs if you like.”

During this, Mutulu Kafele started things upstairs by operating the open mic.

“He invited me to do the Montrose Rock Revel at Rudyard’s. And I was hesitant because I’d only performed in front of my friends at the time, but he told me: ‘Art is for everyone, and people should have the right to like it or not like it.’ So I did the Rock Revel. It was probably one of the best performances of my career,” Kafele said. “He was highly rooted man. Really rooted in people’s lives.”

After several bits of poetry and a few more stories, a ukulele came out. Erin Corbitt said she was hardly used to it, but that her singing was her strong point.

“I want to do this for Jeff, because he really inspired me when I gave up on myself,” she said.

Artists and musicians did their thing as the sun went down. After dark clowns came up, as did scores of people just finishing the 14-mile July edition of the Critical Mass ride. At that point the crowds held different moods contextually sensitive to their geographic locations in the venue. It was like Avant sectioned off different parts of the grieving process throughout the place. Back Patio was full of happiness and laughter. First floor had people dropping emotion bombs in-between tracks (with energetic moshing to come soon after). Upstairs was much more laid back, yet somber.

Near midnight Devil Killing Moth played their set on the first floor. People filled in, stood on chairs, crowded so close to the microphone there was no way to tell if they weren’t being picked up by it. Almost at the end end of their set, just before the crowd demanded an encore, one of their band members (I won’t mention who specifically out of respect) admitted he had survived a suicide attempt years prior.

“We all need to support each other,” he said. “We lost Jeff. He fell victim to what happened, what almost happened to me. Have your friend’s back. If there’s something going on, be there for your friends. Please do it.”

Rounding out past 1 a.m. was Kosé. Kalvin Camp of Space Villians helped out with his electric guitar since Kosé’s singer, José Pineda had an injured hand. This is where things escalated. The energy on the first floor was already past adrenaline levels thanks to the endless barrage of electricity from Whit, DKM and the like. Kosé dialed it up to 11. 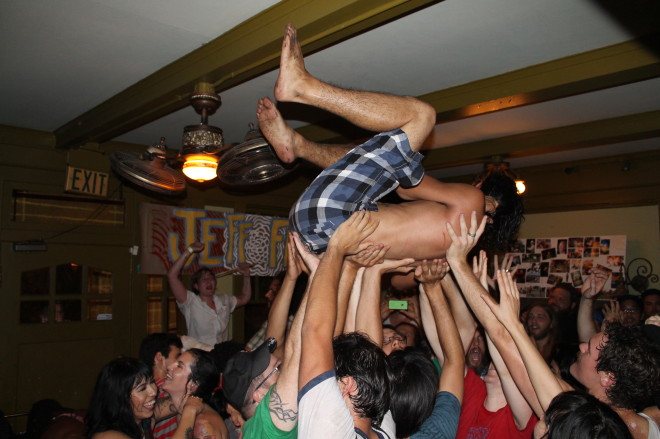 They went through song after song, but you couldn’t hear the lyrics because there were too many bodies. Too many people in the way of the speakers. Too many voices singing along. Or shouting along. A pseudo mosh-pit/skanking began near the front. People got lifted up. Not so much crowd surfing as a human trampoline. Body heat radiated in every direction. The first floor felt like a sauna at this point. Only the bartenders seemed indifferent to the energy. Kira Black looked ready to die from beating the hell out of the drum set.

Past 2 a.m. people leaned on each other out of Avant. Some headed to afterhours, or to late night Tex-Mex spots like Chapultepec Lupita. Most just drifted home.

The Facebook page for Jeff Fest continues to fill in with attendee’s notes and photos of what they experienced. Along with several personal asides and calls to make Jeff Fest an annual occurence. Like I said prior, I never got to meet Jeff. So I can’t pretend to know him, or the effect he had on Houston. There are dozens of well-written obits in the feed sites and periodicals that do him more justice. But I will say this: hundreds of people showed up to pay their respects June 25 and all of them were products of his influence.