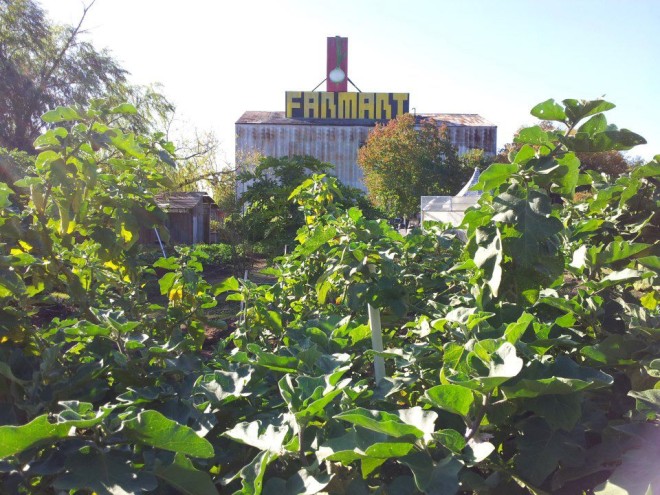 Last month, Joe Icet retired from his day job of 29 years as a refrigeration mechanic to follow his heart, as a full-time urban-farmer.  His pension, from pipefitters local 211 union, will provide for his expenses while he spends his days farming for the community.  Located in the 5th Ward, the 2.5 acre Emile Street Farm is a functioning model for others interested in establishing communities based around local, sustainable, organic food.  Through urban farming, education, experimentation, arts, and cultural events, The Last Organic Outpost offers solutions for dozens of problems facing people in cities.  The farm is the only oasis in a food desert-there is little other healthy food available for folks in the neighborhood who lack the means to travel several miles.

Leon casino, In addition to growing food, the farm has become a food systems laboratory.  A loading dock has been transformed into a hydroponic garden.  Next to it is a 4,500-gallon rain collection system, and an 11,000-gallon fish tank in which a team is planning to harvest blue crab. Community members are researching the electrical and water systems, and creating the technology to provide solutions.

Recently, Joe gave an interview about his project.

Nick Cooper: How did you first get involved in urban farming?

Joe Icet: In the late 80s, I met a guy doing permaculture in Blanco Texas. He introduced me to bunch of folks in the area. We started a permaculture group called Seed, which focused on sustaining the earth through environmental design. We also helped start a community garden called Stone’s Throw.

Nick Cooper: What are some of the techniques you discovered that work well?

Nick: Can you give some examples of how the community gets involved in the innovations?

Joe: During a very dry season several years back, we came up with ways to water we called drought technology. Cleveland Glenn came up with the name.  He was raised in 5th Ward.  We changed our soil menu by adding clay to hold moisture and took clay pots and glued them together to make ollas to help to water in the root zone of the plants.  We set up drip line using 55-gallon drums tied to drip line using a wicking method.  Mark Holt headed up a lot of those projects.

Nick: What do people have to know about farming year round in Houston?

Joe: The cool weather is the easiest. It’s a good time to start farming, especially for greens and root crops. There are lots of varieties to choose from — beets, spinach, loose leaf lettuces, potatoes… At present we are growing eight varieties of spinach. A favorite this season in the neighborhood is red giant, a mustard green.

Nick: How has farming impacted your life?

Joe: The relationship to the land and to community has changed the way I eat.  The revolution at the Outpost is taste.  We are building dinner for Houston by reintroducing farming back into communities.  We’re giving folks a chance to try varieties they’d never had before.

Nick: How have you partnered with community, arts and, activist groups?

Joe: For the last several years, Ja’nee Barton has headed up Farmfest. It is held the first Saturday in November. In the spring, we have a skillshare.  As a shared space, many activist communities including Sedition Bookstore have come out to the farm.  They had dinners, showed movies and sold books.  The Occupy group came out and helped plant and weed in exchange for food.  Vegan groups have participated with raw food demonstrations.  Transient Antenna, a seven-person “mobile living experiment,” did the murals of “Farmart” and the onion, back when the farm first opened.  David Reed has been working on a cob oven.  Folks built a stage, a yoga deck, a demonstration micro home, signs and many other art projects. Houston Free Thinkers and 5th Ward Church of Christ both have garden projects at the farm.

Nick: How can folks get in touch and what are your plans for the future?

Joe: The web site is lastorganicoutpost.com.  We are a 501(c)(3) nonprofit.  Over the next 10 years, we will be working on building a workforce of farmers, growing the food that Houston eats.  The point is to provide access to food for nearby residents, education on how to grow, prepare, and eat the goods.  We will be planting fruit trees as a community resource.  We will be looking for 600 farms throughout Houston to build a food economy around local needs.  Land is everywhere in the city-there are abandoned lots.  We can help put folks to work that need work, growing food for their communities.  We live in a fertile world.  That is our blessing.  We can farm a way to plenty.