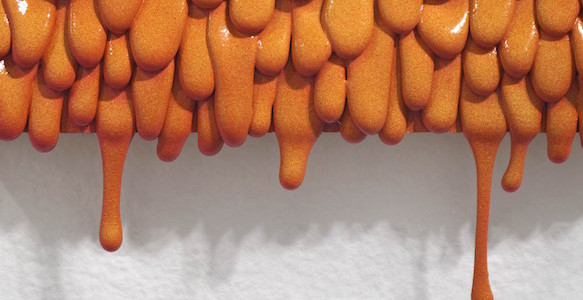 An Interview by Adam Mrlik
Photo by Iva Kinnaird

With John Medina’s work’s dripping and dropping from the walls, textures and colors took center stage in the hallway gallery space at Art League Houston earlier this summer. Being taught since birth to not touch the art, I let my intrigue get the best of me — but instead of violently jabbing the canvas I decided to learn more about these works and the artist behind them.

Adam Mrlik: The work has a texture to it that makes anyone that comes near it want to touch it, which is ironic because you are told not to touch art. Is this deliberate?

John Medina: When I was younger, my mother really got into crafting. It wasn’t uncommon to come home from school and find a hot glue gun sitting on the dining room table. If you leave a glue gun unattended for a while it will eventually start to drip. This happened all the time in our house. My mother would get busy doing other things and the glue gun would drip onto the table. Fascinated by the clear, jewel-like droplets I would reach out to touch them, only to have my hand slapped away by my mother who warned that I would burn myself. I really enjoy the fact that people are so attracted to the textures of my paintings. I like to watch as they reach out to touch the surfaces only to retract their hands at the last minute as if there is some sort of invisible force field around the panels. The viewer is experiencing my own desire to touch something that I wasn’t supposed to. Its a sort of primitive urge that can be overwhelming at times. In my case, I gave in to my urges and eventually burned myself with hot glue. Viewers may find that touching art may have its own set of consequences. 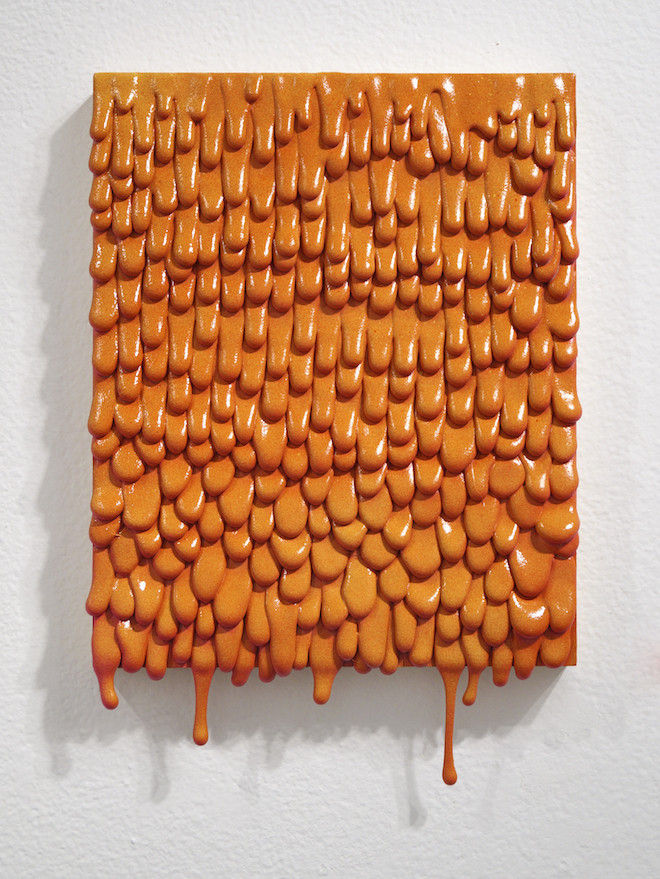 AM: What artists are you inspired by?

JM: I’ve always been inspired by artists who have a strong narrative in their work. Ken Little has always been an inspiration of mine as well as Vincent Valdez. Two very different artists, but I like the way they tell stories. Their work is very much about where they are from and as a viewer you get a real sense of who they are. Their work can talk about universal themes, but it is done through a very personal lens.

Dario Robleto is another dude that just blows my mind. First of all, his titles are poetic and I’ve always enjoyed a good title, but his materials lists are fucking epic! I mean, it’s like bone dust from every bone in the human body, melted vinyl records salvaged from the sea, paper made from the shredded love letters of wives and girlfriends writing to civil war soldiers and stretched out cassette tape consisting of sounds recorded from melting glaciers. There’s a real sense of history to his work because of the materials he uses. I get it. I’ve always been very meticulous about the materials I choose to work with. I think about him a lot though, because you have to wonder, does this guy just know where all the good estate sales are or is he just really good at Ebay? I mean, where does he get all of his materials? I mean, it’s one thing to grind up old Dianna Ross records, but where the hell do you find “Men’s wedding ring finger bones from various American wars?”

AM: How do you think being raised in Texas, a southern, more conservative state, influenced you and the way you make your art and portray messages in your art?

JM: Growing up in Texas taught me to be rebellious. I learned to question everything from an early age. I also learned that there are systems in place that you either work with or you work against, like religion, politics, culture and gender roles. I grew up in a conservative, Catholic community. People expect you to be a certain way and to do certain things. So okay, I tried to like football and I tried to develop a taste for menudo and I tried to wear clothes from the mall and I tried do well in Sunday school, but in the end it wasn’t who I was. I just didn’t always feel I could say it out loud. There were real consequences to that, the least of which is that people will talk shit about you. So my artwork became my voice. I learned to stay true to myself and communicate my perspective to people who may not have agreed with me. But subtlety is key. I think people are prone to listen to you as long as you don’t scream.

AM: The textures in your pieces looks like slime, or something melting - there must be some sort of connection here.

JM: In this case the surfaces are representations of melting ice creams, however, that is not to say that hot glue isn’t a part of a much broader narrative. Certainly there are ties between hot glue and my childhood, and in some ways it’s an homage to my mother. I get my creativity from her and I like that her influence can play a role in my work, even if it’s not about her. The truth is, most people don’t respect hot glue as a fine art material and surely they don’t expect much from it. People are often surprised to find out what I can accomplish with craft store glue sticks and spray paint. There is an unexpected beauty in these works. In many ways, hot glue is a representative of myself. 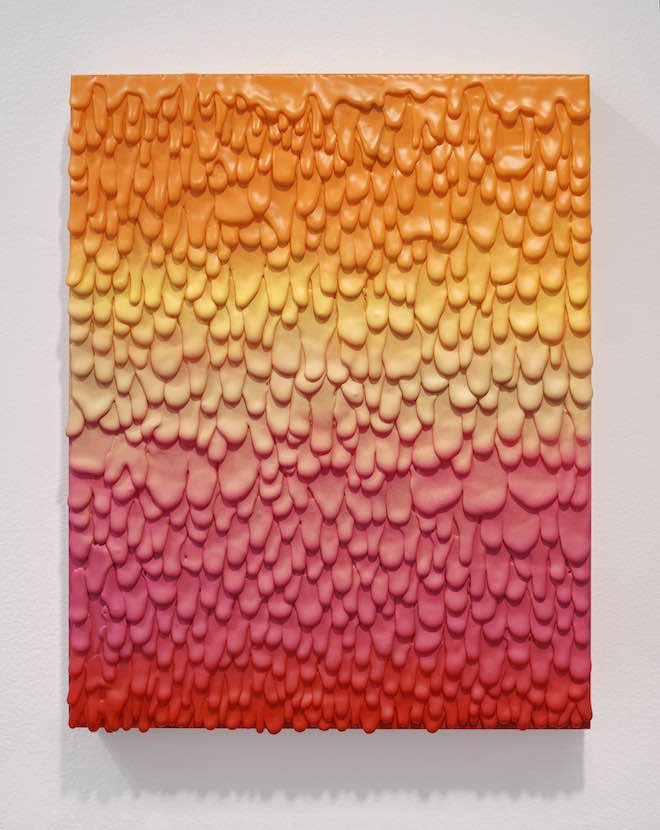 AM: How do the bright, vibrant, almost neon colors reflect your serious subject matter?

JM: This body of work ultimately deals with the fleeting nature of life, love and success. The vibrant colors represent those perfect sweet moments frozen in time, while the melting texture is meant to be foreboding. While I want the viewer to revel in that exact moment, I also want them to think about what came before and what comes after.

AM: You seem to have a sense of humor concerning serious inquires about life and society.

JM: As I get older, I’ve decided that it’s okay to be funny and playful. I think there’s a mischievous quality to the work. Its a much more accurate depiction of my voice.

AM: What are some things that you question about our society that directly influences your work?

JM: The media, for sure. The way that we consume information. Anybody can publish whatever they want and some yahoo out there is gonna believe it. Recently there was that FIFA VP who quoted the onion during an interview. I mean, that’s crazy! We’re able to craft our own little worlds now by surrounding ourselves with the articles, opinions and studies that agree with our crazy whims. Before long we won’t know what to believe. Everybody will be both right and wrong and it won’t matter who’s telling the truth. That’s scary to me.