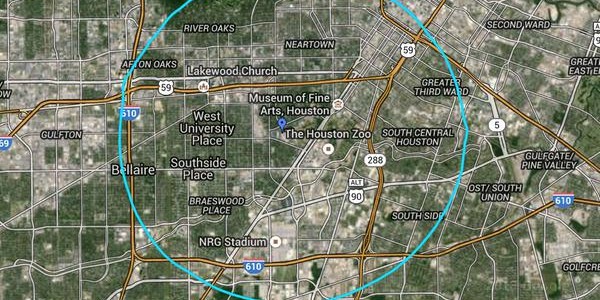 Today it was announced by the FCC that Rice University Radio will be back on the FM dial. The details include: the frequency will be 96.1FM, the broadcast power will be quite low — 41 Watts, and the height of the antenna will be 47 meters near Rice Stadium.

Starting up as a hard-wired radio station in 1967, KTRU started FM broadcast at 91.7 MHz in May 1971, and by 1981 ran at 650 Watts. In 1991, the transmitter moved north of Houston, and increased in power to 50,000 watts. This created a golden age of non-commercial music in Houston that lasted until 2011, when U of H purchased the KTRU frequency and antenna for $9.5 million. Since then, the frequency has been used for automated classical 91.7 KUHA. Though KTRU disappeared from the regular FM dial, it lived on as 90.1FM HD2 for folks with HD radios, and continued to stream on the internet.

Compared to KTRU’s 1991 - 2011 era, the new transmitter will have less than 1% of the effective broadcast area. However, since the transmitter is in a densely populated part of town, hundreds of thousands will potentially be able to tune in.

The permit, which came through the FCC’s Low Power FM (LPFM) program, was viewed by some as a long awaited return to the regular FM dial since the valiant Save KTRU struggle failed to stop the sale of Houston’s most independent music station.

Ian Wells, from The Local Show, said, “It’s been a multi-year effort. The application was submitted a year ago. Will Robedee and engineers and attorneys engaged by Rice have really been carrying the torch for a long time.” Station Manager Sal Tijerina said, “It’s just a great thing for Houston for KTRU to return to the airwaves. KTRU and Houston have gone hand in hand. From here on out we can again enjoy music together. Hopefully we can expand from here.”

Others think of it as a weak substitute for a station that used to be able to loudly reach young people far into the suburbs and change their lives for the better with non-commercial music. There is still much resentment from some KTRU alums towards the administration over the secretive 2011 deal.

William Watson, KTRU chief engineer, 1980-1983 wrote, “The call sign KTRU is currently licensed to a religious broadcaster serving La Harpe, Kansas with a 750 Watt station.” So, Rice may or may not be able to negotiate to somehow get “KTRU” back.