Home / Art / The End of the Artery: An Interview with Mark Larsen

The End of the Artery: An Interview with Mark Larsen 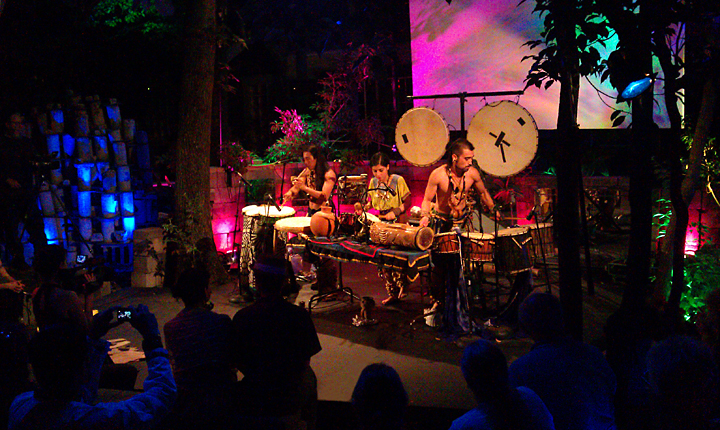 Since 1987, the Artery has been a spiritual space nestled in a thick canopy of trees, where art appreciation is a non-commercial, experience.  Founder Mark Larsen moved into the space four years earlier, beginning a thirty year relationship with an urban forest.  Trees don’t grow overnight, so the forest is a collaboration between nature, Mark, and multiple former residents of the space, most of whom remain nameless to Larsen.  A Michigan native, he found himself in a tiny pocket of harmony in a city where human appropriation of nature was at its height.  After completing graduate school in painting at U of H, Larsen saw the presentation of art in galleries as stripped of spiritual context.  His response has been the 26 year long project called the Artery, where collaboration, harmony, and nature have been valued over commercial considerations. Painting is often a lonely profession, but Larsen has made art a social experience by providing a space for communal art classes, music, dance, poetry, and politics.

In a recent interview, Larsen said that the old man that lived there before him, “was a pack-rat who collected all this building material.  I used to get tickets from the city for it.  So I took all that slate and blocks and cylinders and started making it into art and I no longer received citations…  It’s the old story of build it and they will come.”

Key in the early years was Larsen’s friend Bill Day, “He was working with a steel drum band (Shinar).  They needed a place to practice with a lot of room.  So we began a Monday night practice.  After a while we started getting other bands.”

It wasn’t just bands.  Over the years, the Artery has hosted poetry, dance, politics, and many other forms of art.  Some of the experiences were one-time events, when everything happened to coalesce in a special time and place.

“One time I had a call from Amazon Watch in San Francisco and they said, ‘We’re bringing Peruvian and Ecuadorian tribal elders into town to protest at a shareholders’ meeting.  They said they can get U of H, or St. Thomas, or Rice, but they said to try the Artery first.’  Sure enough, over a two year period, we had them several times, in full regalia, interpreting from their language to Spanish to English.”

When Bush’s presidency heralded a new era of American warmongering, the Artery was there to welcome speakers, thinkers, and elders.

“One time we had twelve minutes on national radio for a panel discussion with Sissy Farenthold.  She said that night, ‘we are on the eve of crimes against humanity.’  Then you look back on what was said at that panel, what was broadcast over the airwaves… She was right.  They were right.  We need places for smart people, and elders, to come and share.  When government and systems start to crash, that’s where a place like the Artery, and other alternative art spaces, become essential.”

Six months ago, Larsen had to confront an unprecedented challenge, “They sold the property next to me — Tierny Malone’s old house.  They’re gonna make eight town homes, four stories high, right up to the property line.  That would kill the trees on the South side of the property, and parking’s gonna become more difficult.  So, that’s the gentrification angle.  But soon afterwards, we had a couple of windy nights and all these branches were crashing down out of the forest — it was the drought two years ago that really sealed the fate.  The huge trees I have are real sick, and several of the medium trees have died.  Add to that the development next door when they take out all the trees on the South side and it’s not the Artery anymore, so the time has come.”

In addition to Bill Day, Larsen’s long time collaborators include Mark Lacy, Malcolm Hackney and many others, “They all feel like the Artery’s theirs.  This shows how far you can get in life collaborating with folks.  It doesn’t have to be about you.  Especially in the beginning stage, it was more of a ‘we’ thing with all the artists that came and played. I didn’t have two coins to rub together and was able to have all this experience.  I even had a piece of paper that I handed out that said the Artery is a commercial free zone.  It was only when the property taxes got crazy, and I started producing the videos, that we started having to charge.”

Larsen says his immediate neighbors, who supported his project instead of calling to cops on him, did so because, “It’s an African-American area and I have a lot of African-American and world music.  They really honored and appreciated the multicultural aspect of what our experiment was about.”

When town homes first started going up ten years ago, Larsen dreaded his new neighbors. “I figured that people moving in are a particular demographic, and they might not appreciate what we do.  We were really involved in a lot of political events back then — anti-war, etc.  Surprisingly, every single person that moved into the neighborhood and asked ‘what’s this place about?’ subsequently, became the most faithful ones to attend events.  They were the most devastated, bummed out, and freaked out, when they found out it’s closing.”

Before announcing to others that the Artery was closing, Larsen processed it alone.  “I went through all the phases over the summer, anger, denial, bargaining… could I still stay there?  But I’m in the acceptance mode now and I hope my friends who love the Artery will get there quick, because even forests have a life.  I think it’s time to move on and give up this project.”
On KPFT’s Eco-ology show, host Pat Greer quoted Larsen, a man who has spent thirty years tending to trees, saying, “The only way we will know Eden on earth is if we protect what is left, and foster stewardship and inspiration from nature’s return to areas from whence she has been banished.”

Selections from the Artery’s Video Archives

Everything in the Artery’s Video Archives is interesting, but here are some really special ones.

Climate Scientists Q and A with Students: Climate scientists Dr. Barry Lefer (University of Houston) and Dr. Dan Cohan (Rice University) share their expertise with students near the heart of big oil.

Huehuetl, ‘Constelaciones’: Based in Tonala, Mexico, Huehuetl performs dance and music in costumes and on instruments they make themselves, honoring their Mayan, Olmec and Aztec traditions.  Houston has long been a second home to Huehuetl.  Many Houstonians saw Huehuetl decades ago, performing at MECA, featuring Isaac Borsegui, his wife Patricia Alacala, and their three small children, Ce Acatl, Topiltzin and Tonantzin. Now those children have grown up and have inherited the traditions and leadership of the ensemble.

Marlon Lizama, ‘Immigrant’s Poem’: One of Houston’s most renowned breakdancers is adept with poetry as well.

Ira Perez, ‘No Regrets’: This young native Houstonian has a voice that reflects a maturity beyond her years.

Karina Nistal, ‘Somos Hermanos’: Singer/songwriter Karina is a Houstonian of Mexican and Cuban heritage and part of Rebel Crew.  This Spanish language song features a large ensemble of talented musicians.

Gypsies, ‘No, No Naley Gadje’: Since 1974, Greg Harbar and his group the Gypsies have been bringing Eastern European traditions and dance music to Houston.