Decrease Font Size Increase Font Size Text Size Print This PageSend by Email
The planet Mars has been used in literature and movies for well over 100 years, and to various degrees of scientific authenticity. The upcoming release from 20th Century Fox, The Martian, directed by Ridley Scott and starring Matt Damon as an astronaut stranded on the red planet, promises to bring the most accurate scientific representation of an actual mission to our solar system’s fourth planet to date.

Leon casino, The novel by Andy Weir was originally offered for free on his website then became a Kindle sensation, which led to Weir being signed to a literary agent and the print edition becoming a well-reviewed novel. The book includes accurate depictions of the latest known conditions on Mars as well as knowledge of botany and orbital mechanics. The protagonist has to survive alone on Mars after being left for dead by the rest of the crew. Whenever a problem pops up, and they do with regularity, there’s math involved in finding a solution.

When H. G. Wells published War of the Worlds in 1897 much of his information about Mars and its possible inhabitants was garnered through the research of 19th century scientists. Percival Lowell (1855 – 1916) who claimed there were canals on Mars was influenced by other scientists of his era like Camille Flammarion (1842 – 1925) and Giovanni Schiaparelli (1835 – 1910). There was even a sequel to an unauthorized version of War of the Worlds, Edison’s Conquest of Mars by Garrett Serviss that introduced concepts like spacesuits, death rays and oxygen pills. 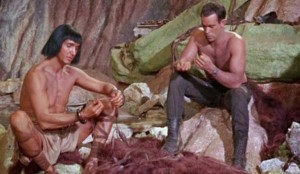 Flash forward to 1964 and the film Robinson Crusoe on Mars, which used many of the tropes previously covered in science fiction tales about Mars, with a tongue in cheek nod to Daniel Dafoe, including a space slave man Friday. RCOM featured what were then state-of-the-art special effects.

Within a year the NASA Mariner 4 mission would rewrite what scientists knew about Mars. Since then discoveries like the gigantic canyon Valles Marineris or the 16-mile high volcano Olympus Mons on the plateau of Tharsis have increased our understanding of the geology of Mars.

The Martian wants to be the film that merges actual scientific fact with the action and suspense of survival on a distant and hostile world. There are no monsters but there’s also no water and no oxygen. If the movie is half as good as the book then it’s going to be huge. The Martian (see trailer here) opens wide October 2.