Sophia glares at the college banner hanging on the wall of her seventh period class. Students are engrossed in their work around her as she is briefly lost in panic. Had her mother made it to work today? Had she been pulled over on her way there for some minor traffic violation? Would the officer question her lack of documentation? Would she be deported?

Her train of thought is interrupted by a break in vision with the banner, refocused she meets the gaze of her teacher standing in front of her. The instructor hands back a paper with an eloquent series of red streaks across the top, bringing much needed relief to Sophia. A subtle acknowledgement of her great work is exchanged with slight nods and smiles. Her thoughts settle and refocus on the rest of the work at hand.

After skimming the textbook, she realizes she had read this the night before, but there is still much work to be done. Again, her mind wanders. Her eyes fall onto a student intently focused on the clock, drumming his fingers on the desk in anticipation of the bell.

If only Sophia’s worries were as trivial.

“One of my close friends, he and I were talking and he said ‘Give me a reason why I should do my homework.’

He was like, ‘Why do you let yourself be defined by a number? Why let it define you and be who you are?’ 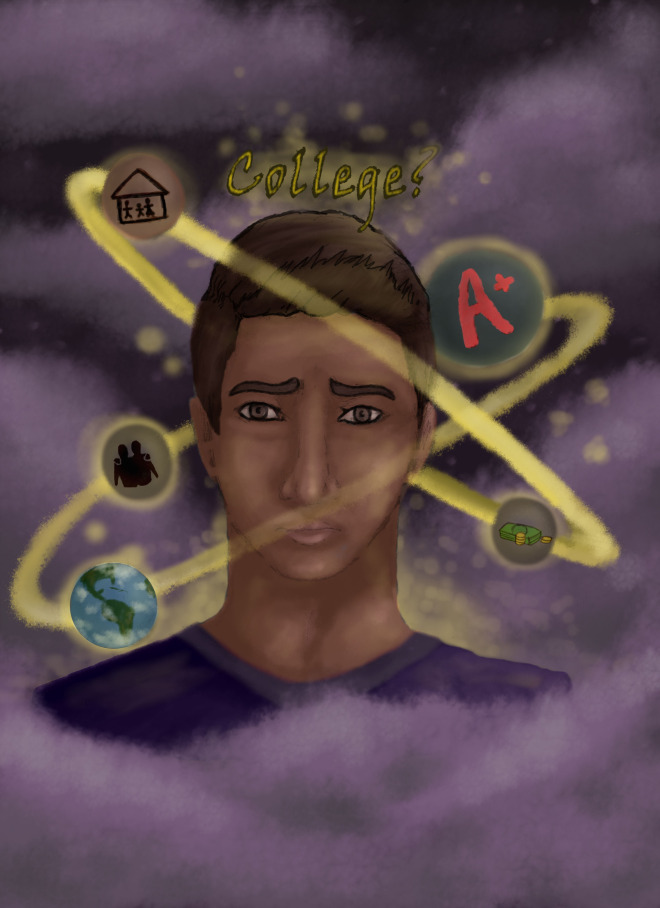 Then I told him, ‘The reason is, to the government, I am a number. I am an alien number. So to them, there really isn’t much to me. The reason I try so hard is because if I become a top number [in school], then I can become more than a number to the United States. A lot of the kids they take their privileges for granted, and they don’t realize that a lot of the things they have, I had to work for.’”

Sophia is an illegal immigrant. In fact, Sophia is not her real name - her name and another student’s name were changed in this story in order to protect them (and their families) from the uncertainty that comes from life in the U.S. without legal residency. A status which keeps Sophia from those privileges other students don’t think twice about - student loans, acceptance into college, or just the assurance of knowing her parents will be home everyday when she returns from school.

As an undocumented student, Sophia’s concerns are difficult to grasp to those privileged with the crest of citizenship. Many who squander this birthright have their priorities skewed in a way that would break down the dreams, and any chance of success, for those in the same boat as Sophia.

“If my friend had worked a little bit harder he could go into Rice without having to pay anything and even though I’ve been working harder than him, even though I have better scores than him, I can’t even apply.”

“I know there’s thousands and thousands of scholarships, but then I look at the requirements: Must be a resident. Must be a citizen.”

In June of 2013 The Secretary of Homeland Security gave many undocumented children in the U.S. some sense of hope. Deferred Action for Child Arrivals (DACA) allows students - who meet several requirements - to request authorization that allows them to work and attend school, among other things, for two years without fear of deportation.

“I was going through my newsfeed the other day and some girl shared a video of some politician, I guess,” Sophia said. “She [talked] about how [immigrants] are screwing up the economy and what not. People don’t realize the application for Deferred Action is like $400 plus legal help.”

That legal help amounts to around $300 more.

“It comes to around $700 every time you renew [every two years],” Sophia said. “But even then we are considered illegal, undocumented. Even though we have these privileges, we’re still not legal. We don’t have residence. We’re not citizens. So we’re still not - we don’t get all the benefits.” This includes benefits such as final aid, scholarships, and in some instances, acceptance into college.

There’s also added costs if undocumented students want to do anything more than just attend school and get a job.

Last year, Sophia got the opportunity to travel with a school group out of the country. Though her fellow students just needed money for airfare, hotel and food, Sophia also had to pay for permission to exit the country.

“You have to submit the application and pay and if they decide to deny it, you don’t get your money back,” she said.

It’s understandable that after paying all of these fees, Sophia is somewhat confused when she overhears Americans complaining about the financial burden immigrants put on the U.S. such as housing the children currently detained at the Texas-Mexico border.

“OK, then. If the government is using their tax money [to house those children], then what is the government doing with the money the aliens have given to them?” Sophia asked.

But despite this frustration, both Sophia and Steven said they think the system currently in place is a good one. 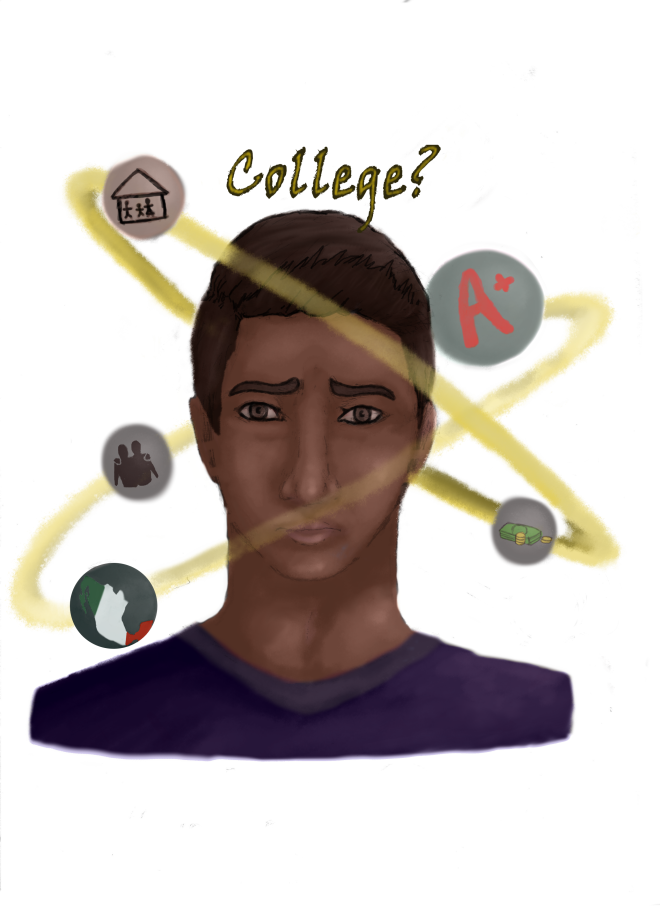 “This is a way to citizenship,” Sophia said and adds she doesn’t agree with sweeping reformation for all. She doesn’t believe immigrants should be given assistance without having to work for it - without proving they will be productive citizens.

Sophia, who is also actively involved with the politics of this issue, said the goal is to turn DACA into a process toward citizenship.

“So they’re thinking that after a couple of renewals of it, you’re going to be able to become a citizen or a resident at least,” she said.

Rebeca Trevino has seen a lot of students like Sophia and Steven over the years. As Program Manager of the Academic Achievers Program at the University of Houston, she has helped many undocumented students get the financial, emotional and academic support they need to earn a degree.

More importantly, her office recently conducted a survey along with the Office of Institutional Research to find out how these students were performing.

“Of all the undocumented students that we had in our campus, [they] overwhelmingly had the highest GPAs in the institution,” Trevino said.

This wouldn’t surprise Mary Frances Carter, an English teacher at Spring Woods, who, along with a former student, was recently interviewed by Houston Public Media about undocumented students. Carter’s former student came to her his senior year with an acceptance letter to the University of Texas, but not the documentation needed to apply for financial aid. This incident encouraged Carter to establish The Dream Project. Currently, in the early stages, the goal will be to provide help to undocumented students at Spring Woods who wish to go to college.

“I wanted to create something sort of like Collegiate Challenge, specifically designed to support students who don’t have status,” said Carter. “Initially, it was seniors as they’re applying to college, but I’d like it be something that starts in ninth grade, sort of like our T24 courses do.”

All of this is appreciated by Sophia and Steven, who are looking for this sort of help as they near the end of their senior year, head to college and on to their future.

“I did my research, and looked for what was the best career. Biomedical engineering is the number one career. It’s growing. I’m not going to be unemployed,” said Sophia.

This isn’t her first choice, but it is the best considering her family situation.

“If I did what I wanted to do, I would be a music teacher. The thing is, I don’t know how that’s going to provide for my family. I don’t want to just be better for myself, but be able to bring my family along with me. Be able to have enough to where I don’t just support myself, but to where I can help my family, just give back to the ones in Mexico. I realized it’s not about what I want to do, it’s about what I have to do. I have to change the level of economic stability that I have. No one else can.”

When thinking of his future, Steven also considers those who sacrificed to get him here.

“My mom is already having problems with her health - high blood pressure and stuff like that, her body aches. Also, my step dad works as an insulator so it’s, like, hard labor - since they didn’t go to college to get an education or anything - they didn’t even finish elementary. So I really want to go to college, graduate, and start my career in about five years and start helping them already. That’s what keeps me going.”

Meanwhile some of us are still counting down the seconds until the bell rings.

This piece was first published in The Streak, the student newspaper at Spring Woods High School.

Your Guide to the November 3rd Mayoral Election