Decrease Font SizeIncrease Font SizeText SizePrint This PageSend by Email
James Ponsoldt, the director of Smashed and The Spectacular Now and the newly released The End of the Tour has a long running friendship with the screenwriter of the latter film. “Donald Margulies was my professor at Yale,” Ponsoldt says to Free Press Houston in a phone interview.

Leon casino, Appropriately, The End of the Tour is a movie about interviews and about authors. The film revolves around the real life characters of authors David Lipsky (Jesse Eisenberg) and David Foster Wallace (Jason Segel) and a subsequent road trip where Lipsky tags along with Wallace on a book tour of his ground breaking novel Infinite Jest. Lipsky had recorded the entire trip on cassette tapes. The interview was originally intended as an article for Rolling Stone magazine. 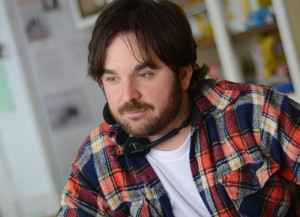 Margulies contacted his former student regarding a script he had written about that book tour. “Donald was a fantastic professor, my own father was a college professor for 30 years so I know the value of a really great teacher. I was in his class the year after he won the Pulitzer Prize in Drama [2000] for the play Dinner with Friends,” says Ponsoldt. “I was intimidated but he was also incredibly generous and humble and interested in what his students were attempting to do. Our feeble awkward 20-year old voices.”

Soon afterwards Ponsoldt was attached to the project as the director. “When I came aboard as the director I had an epic four-hour conversation with Lipsky and he consented to let me hear all the recordings. Then I in turn shared them with the actors Jessie and Jason.”

The End of the Tour establishes the relationship of the two men and the landscape they inhabit. The road trip constantly shows strip malls and movie theaters that reveal the mindset of both the characters and the Middle America they travel through. 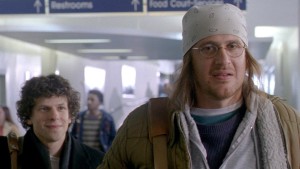 “When we first meet Wallace we see him from Lipsky’s point-of-view, we feel that these two men are cut off from the rest of the world when they’re together. Lipsky was a successful young writer but then he got to spend some time with the single most successful writer in America,” says Ponsoldt.

The End of the Tour was shot on 3-perf 35mm film. “It gives you lovely grain, when you shoot on 3-perf you don’t have to use the big anamorphic lenses but you can still project widescreen. It’s easier to shoot handheld scenes, which we did a lot of in the car scenes,” says Ponsoldt.

Music plays an important part of the movie also. There are lots of REM songs on soundtrack, which is no surprise as Ponsoldt hails from Athens, Georgia. “REM is a big personal connection for me. The last movie I made, The Spectacular Now, REM’s actual office was our production office.

“We used two songs off “Murmur.” That was an album that changed the game for a lot of people musically speaking. When you’re using rock and roll music as source music, you’re hearing it from the car stereo or David Foster Wallace’s home stereo, or hearing it in a 7-11. I had a desire to capture that era and reflect the tastes of these two men,” says Ponsoldt.

“The movie takes place in 1996 but the truth is the music that we hear in the world is built on the shoulders of what came before. When you’re out in the world you hear music from the ‘90s, the ‘80s, the ‘70s.

“I also had a fantastic collaboration with our composer Danny Elfman. His score for Batman, that was the first film I ever bought on VHS and I used to watch it over and over,” says Ponsoldt, adding: “We wanted to create an emotional soundscape and have a delicate touch with the score. Nothing too heavy handed or didactic.”

Ponsoldt for the last few years has been developing a film simply titled Rodham. “I now have experience in depicting the lives of real people. Rodham takes place over a longer period of time, a couple of years in the mid-1970s. Nixon steps down from office and Hillary Rodham moves to Arkansas,” explains Ponsoldt.

“It’s a complicated character study of a woman in her mid-20s who’s trying to balance her personal life with her career. I have one intention with the film and it’s not to be used as a political tool during a major Presidential election. I’m not interested in making propaganda for or against anyone. It’s a character study and to my mind it will be relevant two or three years from now as it would be right now.”

The End of the Tour opens this weekend in Houston at the Landmark River Oaks Three, the Edwards Grand Palace, and the Cinemark in the Woodlands.