Leon casino, Vinyl, a new HBO miniseries that premieres Sunday, February 14, deals with the ups and downs of a record company mogul and his tight crew of executives, musicians and A&R types in the 1970s. Bobby Cannavale knocks it out of the park as Richie Finestra, the owner of American Century Records, with able support from Olivia Wilde, Ray Roman, Max Casella, Juno Temple, and James Jagger and many others in a ten-episode arc.

Vinyl incorporates real bands and characters into its fictional world. With above the line guidance from producer Mick Jagger, executive producers Terence Winter (sc. The Wolf of Wall Street) and Martin Scorsese (who also helms the two-hour pilot) the show delivers an excellence that lives up to its pedigree. 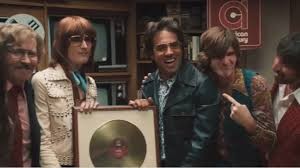 The series opens with Finestra trying to sell his struggling company to the German record company Polygram by promising them that he is about to sign Led Zeppelin. When Jimmy Page shoots down Finestra’s offer he still finagles the sale by telling Polygram that Zepp’s manager hates Germans. Finestra meets with a drugged out owner of multiple radio stations (Andrew Dice Clay as Frank Buck Rogers) who is refusing to play one of American Century’s mainstream clients Donny Osmond. Events escalate south and Finestra finds himself responsible for Rogers’ murder, an event that fuels drama through the rest of the series. Episode One begins and ends (through a flashback) with Finestra having an epiphany at a New York Dolls concert and wanting to get back to his origins of actually loving the music and business he runs. 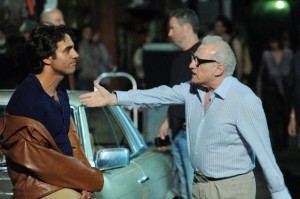 Successive episodes show Finestra meeting his wife (Wilde) at a Velvet Underground concert in the ‘60s. Temple climbs the ranks at the company by signing a punk band called The Nasty Bits. A junior exec tries to sign Alice Cooper as a solo act, which totally backfires. Meanwhile the detectives who are investigating Rogers’ murder turn out to be as fueled by cocaine as their main suspect Finestra.

The more you know about this era of classic rock the more references you will recognize. Like one line of dialogue that manages to name-drop Lester Bangs, Jackson Browne and David Geffen. The Scorsese directed ep shows him handling music cues with the same cool restraint heard in his best films. Scorsese finds a way to use Edgar Winter’s “Frankenstein” to great effect. Scorsese also previously used Mott the Hoople’s “All the Way From Memphis” to open one of his ‘70s movies, Alice Doesn’t Live Here Anymore.

Vinyl spins a tale with losers, winners and musical players and episode after episode delivers a solid payoff. There’s also a solid spine that depicts the characters caught up in a game that is bigger than the parts of their individual contributions.

The Failed Promise of The Texas Miracle