Added on June 20, 2014  Michael Bergeron  cinema, Denmark, punk rock, Sweden, We Are the Best!
No Comments

We Are the Best!

Leon casino, A group of disaffected girls start a punk rock band in We Are the Best! (Vi är bäst!), a charming import from Sweden currently playing at the Sundance Cinemas Houston. Set in Stockholm in the early ‘80s the film follows a trio of pre-teens who rebel against authority, cut their hair short and listen to music on their Walkmans. 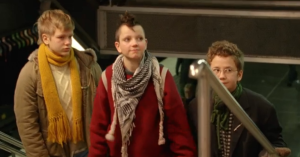 We Are the Best! shows how music can set your soul free but also tackles occasional serious issues that the distaff band’s parents are going through. Mainly light in tone and quite breezy the film delights in its soundtrack, which runs the gamut from new wave to punk to classical guitar. At one point the two founding members of the band discuss whether to recruit a budding guitarist because she’s Christian. It certainly makes the duo up their game since their new member actually has musical training and isn’t just playing with pots and pans.

Despite their differences they bond over mutual likes and dislikes, best illustrated by their impromptu jam “I Hate Sports.” Like any good punk rockers these baby chicks experiment with smoke, wine and playing in the same key. We Are the Best! culminates in a contest and we all know how that’s going to end. Except you don’t - the girls provoke the audience into a riot.

The Water Tastes Weird, It’s Not Just You

Rio: Ramping Up to The World Cup