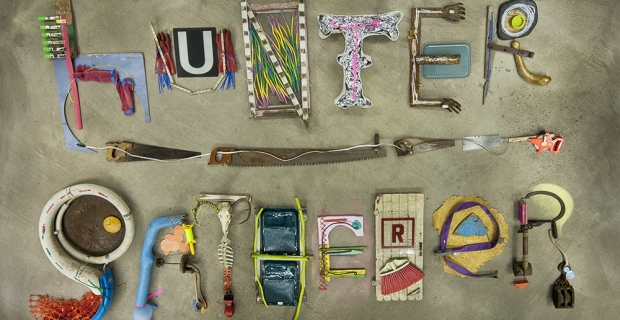 Before people started settling into the towns and villages that would eventually lend themselves to the massive constructs you see scraping the sky, they were nomads. Roughly 90 percent of human history was spent wandering vast landscapes in hopes of finding sustenance. Today, although we as humans have become quite used to settling, if not being domesticated, we hunt and gather in different forms. Houston artists Patrick Renner and Alex Larsen explore the changing forms of the hunter-gatherer mindset in the aptly named exhibition hunter/gatherer at Alonzo Gallery.

Working with found materials, the two formed the idea of the exhibition three months before it opened and then set to work, hunting down ideas and gathering materials. “What inspired the notion of a show with Alex in the first place was my excitement for building a form that grew out of the arch window, the prominent and beautiful architectural feature of the Alonzo,” Renner said. With the go-ahead from Juan Alonzo, owner of the gallery, Renner began chewing on the idea of how to use this, ultimately culminating in an epiphany. Instead of crafting only the organic form sunraider, he used the form, reminiscent of a figure one might find in either an anthropological study of a culture’s demon mythology or breaching a vortex in a sci-fi movie, to interpret the function of a prism. Refracting light into tentacle-like appendages, sunraider reaches out to the rest of Renner’s works - a series entitled “ROYGBV”. “Each of the monochromatic panels is titled with some version of ROYGBV depending on the color (ex.: red is Roygbv, green is royGbv, etc.), because they also exist specifically within their relationship to one another,” Renner stated.

An important note when examining the installation is the missing I. As a reflection of Renner’s research into color theory, no indigo tendril-panel combination exists. This is because he found that Newton arbitrarily chose to include a seventh color to connect the theory to musical notes, believe that music itself was connected to the divine. Beyond acting as a statement against Newton, the lack of an indigo tendril serves a much higher purpose: It doesn’t block the gallery’s door. Aside from not impeding entry into its own exhibition, the lack of indigo also gives the installation an asymmetry that is far more satisfying than an extra appendage would have been. Additionally, severing this tendril saved Renner a lot of time and pain. Made completely out of unaltered found materials, the ROYGBV series acts as monochromatic panels representing the outcome of sunraider’s refraction. Each of the monochromatic panels was created out of already painted/colored found materials, and according to Renner, indigo-painted wood is hard to come by.

As the tendrils reach out, they seem to move through space. Renner explains, “Another bit of the color theory information embedded in the piece is the waveform of each tendril moving through space. It was important to make each one cantilever without support aside from internal structure, to give a sense of weightlessness and imply the movement through space of each wave.” Refraction of light is commonly represented as geometric figures with hard edges jutting out in one direction, but the waveform of sunraider’s tendrils flows smoothly, guiding you into the rest of the exhibition, which is occupied by the debut of new sculptural works of Larsen, also created in the three month span between the inception of the show and its opening.

While Renner’s work solely used found materials, Larsen uses them more as a jumping off point, “It’s not always important for me to highlight the fact that certain materials are ‘reclaimed’ or ‘salvaged.’ I think those terms can pigeonhole the concept of a piece.“ Still, Larsen feels more that he is “constantly hunting for things to gather: colors, shapes, situations.” As he gathers these materials and concepts, they fill his studio, interacting with and reacting to each other until each piece finds its place. While he doesn’t want to focus solely on the idea of using found materials, using them as a jumping off point keeps his work focused, giving his pieces boundaries that he can comfortably work within.

Picking one good example of this mindset doesn’t lend itself to proving this because as you peruse the works on display, the method becomes quite apparent. In Hardly Lurkin’, Larsen inlaid pieces of plywood coated in graphite among painted versions of their counterparts, although that was not his first means of repurposing them. He found these materials, and their main purpose at the time was to be a tool in the preparation of another piece: “openfacedsandwich”. Once they had served their purpose, he had a stack of orange scrap wood that were related to a piece but also a byproduct of the action of his other work. Spurred by the show’s deadline, Larsen was forced to follow through with ideas that he wasn’t sure were worth the time, which always means he was taking risks. “openfacedsandwich” itself represents one of these risks. The majority of the piece is constituted by a chunk of sycamore that he had spent hours sanding and shaping without direction until he took the risk to cut it in half.

Scattered around the gallery space, Larsen’s pieces hang, stand, and sit with a sort of refined finish that sets the visuality of his work apart from Renner’s. Though the two artists hunt for ideas and gather materials in similar fashions, the way in which they made use of them appears vastly different. The handicraft appearance of Renner’s installation contrasts flatteringly with the polished gleam of Larsen’s work in a way that shatters the typical “who’s who” of group exhibitions. Regardless of the method, found objects act as the remnant of an action, simultaneously representing the original, as these artists’ methods act as the remnant of ancestral actions-hunter-gatherers of a modern age.