Through the Wringer: One Woman’s Trip Through Harris County Jail

Local activist Shere Dore says that when participants decided to march up and down Beechnut St, two police officers familiar to protesters from other rallies and marches —  Lt. Upton, aka “Peach Skoal” and Officer Tweedy — began shouting demands at protesters that were contradictory, confusing, and unintelligible. When Dore asked a belligerent Lt. Upton to clarify his instructions, she was handcuffed and placed under arrest. Her story picks up there:

Peach Skoal refused to give me the reason for the arrest while I was taken across the street. In fact, the charge wasn’t determined til hours later. As I sat in the back of the cop car, I was especially uncomfortable because the handcuffs had been placed on me extra-tight, causing discoloration and swelling on my hands and wrists.

Officer Tweedy finally attempted to sell me an altered version of what took place during the arrest.  Since I had been filmed during the arrest, I knew that Tweedy was attempting to tighten up their police report because they had no probable cause to arrest me. I dismissed him by saying that I knew his tactics and refused to talk to him without my attorney.

Moments later, I was pulled from the squad car by a female officer who did a body search while her male counterparts were standing just a few feet from us.  I was facing an open parking lot.  During the search, the female officer lifted my sweater and groped my breasts out in the open.  I felt violated and asked her why she would do such a thing when the men were around and when we were facing a parking lot where anyone could see what took place.

The officer ignored me as she continued to dig in my pockets. Meanwhile, I pleaded with officers to loosen the cuffs because my hands were numb at that point. Thankfully, an officer felt sorry enough for me that he loosened them and was careful when placing me back in the car.  Ultimately, I spent over two hours in handcuffs before they were removed for the night. I was initially sent to the Southeast City Jail on Saturday evening, then transferred to Harris County Jail by 7 a.m. Sunday morning.

Upon arrival at Harris County Jail, I was processed and placed in a holding cell with other female inmates. You could see fear on the faces of those who were new to jail, while other women who had been to county jail before gave advice about the processing and procedures. I had only been arrested and taken to county jail once before, twenty years ago. I’ve since gotten my degree, built my career and had three children before this most recent arrest. Now, as I sat in county jail, I had a “vehicle crime hold” and a “homicide hold” associated with my name, which no jail employee could explain.

In making my calls, I was made aware that my activist friends and my long time partner were working to get me out of jail.  However, the county continued to process me through clinic, classification, then placed me in a cell block wearing county orange attire after the pre trial judge found probable cause to criminally charge me with “interfering with a peace officer.” I learned that a bond was being posted to get me out of jail but that it would take eight to twelve hours to fully process the bond and release me from jail.

After experiencing five different holding cells, I observed that all cells are frigid, leaving female inmates shivering as they sit on cement benches for hours at a time, with no clocks to tell the time, and no way to catch a nap because the cells are filthy. For meals, inmates are given a green-tinted bologna sandwich twice a day. I refused to eat or drink from the water fountains that are literally located at the top of the toilet where there is a green substance outlining the water fountain spout. I didn’t want to take a chance of getting food poisoning or getting sick from the green substance that bleeds into the water from the fountain.

Before you’re moved to a cell block, you’re required to go through the classification tier. This is where women are advised to strip down completely naked in front of other inmates and jailers. I personally felt violated for a second time since the arrest. As we female inmates stood naked, we noticed a jailer who goes by the name of Ms. G, who looks like she could be Snow White’s grandmother with her box-dyed black hair, extremely white, aged skin, and bright red lipstick. An inmate caught Ms. G with her hand at her crotch as we stood naked and helpless. 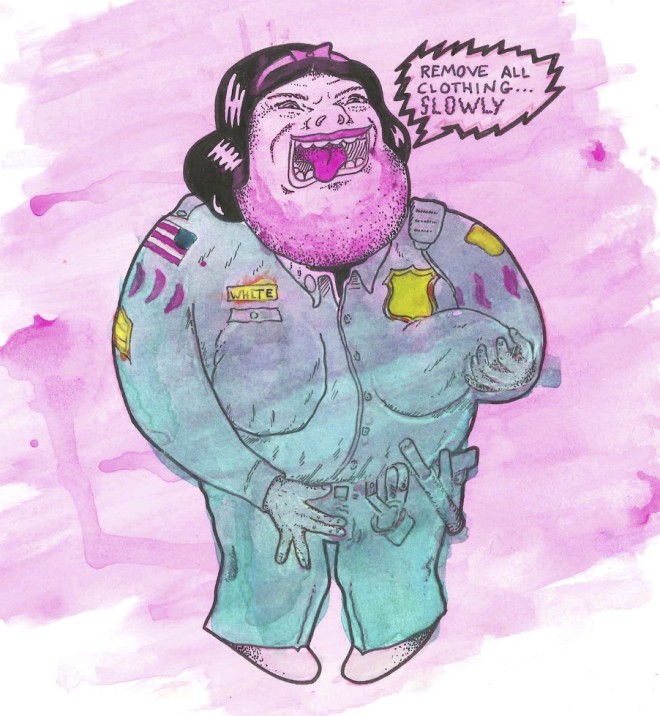 The moment the inmate spoke up to Ms. G concerning her action, Ms. G became combative and threatening while stating that we are the criminals wearing the orange jumpsuits and that no one would care what we had to say about her touching herself or her insensitive words. At this point, I spoke up, reminding her that not every person wearing a jumpsuit is a real criminal.  She shouted back for me to “Shut the fuck up!” or else they’ll keep me in jail longer. I continued to speak out against Ms. G, though, because her violating and threatening us was way out of line.

Moments later, the women – with the exception of me and two other female inmates who had stood up to Ms. G — were pulled from the area.  Ms. G’s jailing partner closed the door and explained that we three needed to be quiet and not cause any further problems. I pointed out that I won’t be silent when I see a jailer touching herself and talking down to inmates when she was caught in the act. I reminded her partner that by allowing Ms. G’s behavior, she is just as guilty in violating inmates as well. The discussion ended in agreement on our part to be silent while in jail because it was stated twice more that the jailer can hold paperwork intentionally to keep someone in jail longer. I certainly did not want this to take place.

I was placed in a cell block at 7:30 p.m. Sunday night, more than 28 hours after my arrest. As I spoke to female inmates throughout the day, I saw that roughly 65-70% of the women were black, about 20% were Hispanic, and the remaining were Caucasian. The majority of crimes consisted of marijuana charges – holding a joint or two but never any real drug charges. Another crime that seemed to be prevalent among the women was theft at Walmart. Most thefts took place as a way to survive — needing food to eat or clothes because individuals couldn’t afford winter attire. A few others were in for speeding tickets, suspended licenses, and/or failure to appear in court.

At no point did I come across even a single true criminal.  Not one murderer, rapist, or child predator. Regardless, we have a system in Harris County jail that violates human rights over and over again from the food served to strip searches led by jailers who pleasure themselves by naked women.

The second worst abuse I witnessed was when a few inmates and I were taken back down to classification to change back into our street clothes. This time, Ms. G was not there; however, we were met with a mouthy jailer who thanked us for being the criminals we are because without us, she wouldn’t have her job. One inmate questioned what she was supposed to do with her feminine product while stripped down, when the jailer began screaming at her to shut up and throw the product in the trash, exposing inmates to the mess made on the floor after she was forced to bend and cough. The inmate requested a fresh feminine product but was denied that product by the same jailer who continued to be condescending towards the group. The jailer and inmate continued to argue; however, the inmate was never given a feminine product to protect herself, her clothing, and most of all, other inmates that will eventually sit where this unprotected inmate originally sat. I was appalled that jailers would expose other inmates to a bloody mess left behind by this inmate who had no control.

Eventually, I was released at 3:23 a.m. and thankfully met by some of my closest activist friends, partner and son, with food waiting for me along with a gallon of water. Jail support was greatly needed after all I endured as a peaceful activist.

I am a woman who is highly engaged with the homeless community and has participated in raising awareness about many social issues plaguing us today. I am no criminal. I am a human being.

Walking out of Harris County jail has left me with a bit of PTSD days later.  My stomach is still in knots, which doesn’t allow me to digest food properly.  For the time being, I’m unable to get a full night’s sleep and my sore wrists are a very tender, lingering reminder of state violence on my body.

UPDATE: One month later, I am still dealing with the effects of Harris County jail and all I endured. PTSD stemming from county jail when you’re not a real criminal is very real.

If you are looking to get involved in the police accountability movement, HPD will be holding another sham “community forum” on Saturday, February 7, at Texas Southern University, where a rally is planned to challenge their PR spin.

Click here to read about the last time HPD put on one of these dog and pony shows.