The human voice can create miracles. How else would one describe the way a song’s vocal track can stir you to the depths of your soul. You’re going to be moved by 20 Feet From Stardom.

Focusing on the careers of backup singers who’ve sung some on some of the biggest hits of the last 50 years this exciting documentary goes behind the scenes on songs like “Gimme Shelter.” The passing of time offers a sense of being able to look back with perspective both to the evolution of popular music and the ups and downs of said careers. Some of the singers presented are Darlene Love, Judith Hill, Merry Clayton, Lisa Fischer, Táta Vega, and many others. We also hear from the “stars” they sing for including Sting, Springsteen, Jagger, Wonder and others.

“We pre-cleared rights for all the songs before the premiere,” Morgan Neville told Free Press Houston a few months back in an interview before the film’s Southwest premiere during SXSW 2013. “I’d seen too many films where they didn’t clear rights, and then the films didn’t work without them.” Neville has been producing and making music related docs since the later 90s, he should know. “The best music documentaries are about something else. Music brings the audience in, it gives them emotion, social commentary, a way to tell another story.” 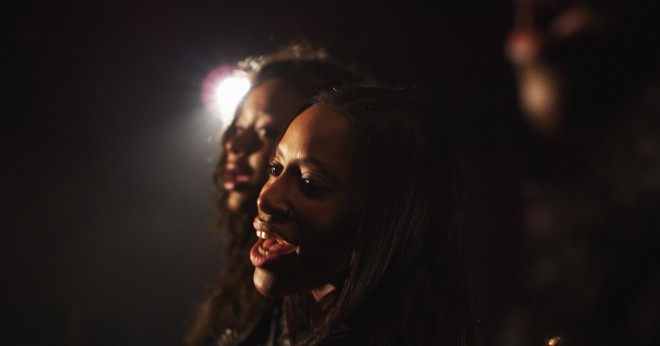 “We found an isolated vocal track for “Gimme Shelter” on a bootleg,” explained Neville about Clayton’s guest vocal. 20 Feet cuts back and forth between Clayton and Jagger remembering the night it was recorded and we hear the vocal-only track and its just stunning right down to her multi octave scream. “Murder yeah.” Believe me, this is a film with a sweet sound mix.

For another song, “He’s A Rebel” the lead singer Darlene Love describes how she was under contract to Phil Spector but he released the record without her name on it. Eventually she walked out of the studio, broke her contract and didn’t see Spector again for twenty years.

Love’s arc is the film’s most dramatic. Love was literally working as a maid on the West Coast and one day one of her songs comes on the radio while she was working spurring her to new accomplishments like acting in movies (Lethal Weapon) and jump starting her calling in life.

“The thing that meant the most to me in my life was when I was inducted into the Rock and Roll Hall of Fame,” Love told FPH. “It was my peers telling me that I was worthy.” Love has sung “Christmas (Baby Please Come Home)” on the Dave Letterman show every year since 1986. “The first year it was okay,” added Love. “But by the fourth and fifth year it was a tradition.”

20 Feet From Stardom opens this weekend at the River Oaks Three.