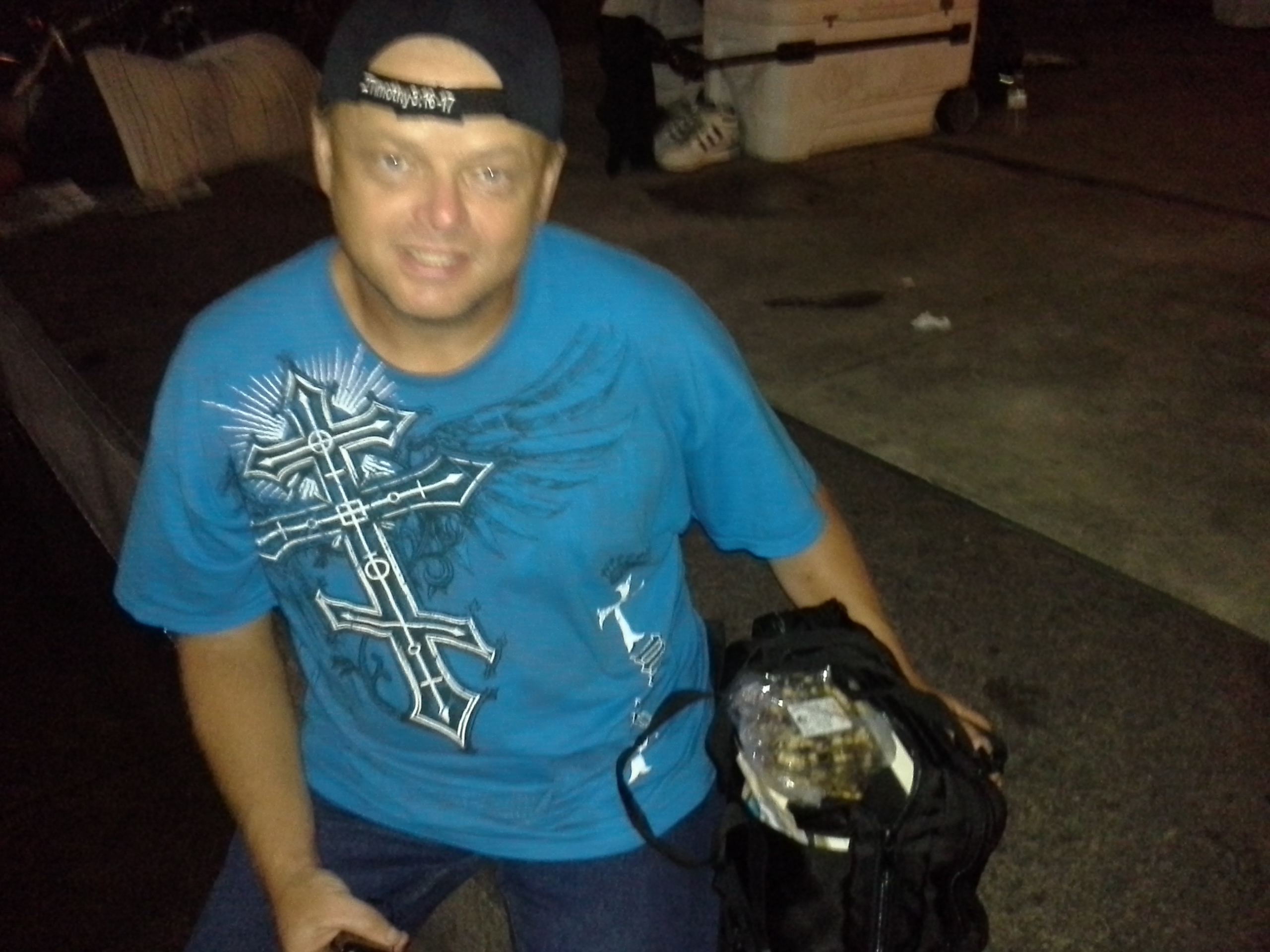 Leon casino, David Barker with his backpack the night of his second victory in court

Starting in a few areas in 2004, and then spreading to more and more Houston neighborhoods, Houston Ordinance #40-352 (aka the ‘civility’ ordinance) makes it a crime for any person to sit or lie down on a sidewalk, or even to put down their personal possessions between the hours of 7 a.m. and 11 p.m. Of course, lots of people put their bags down on the sidewalk between these hours and don’t get tickets, but those people don’t “look homeless.”

There was a fair amount of media coverage for Mayor Annise Parker’s 2012 law that included $2,000 penalties for those sharing food with more than five needy people in public if they lacked prior written permission. In comparison, the even more totalitarian so-called ‘civility’ ordinances, were passed quietly.

Civil rights attorney Randall Kallinen finds the intent of the ‘civility’ ordinance to be obvious, “The law is used in Houston to try and move indigent people out of the downtown Houston area as the the downtown district has a lot of influence with the mayor. The Mayor even bragged about how many fewer indigent people are now found downtown. Many cities have similar anti-homeless behavior laws.”

David Barker is homeless in Houston, and found himself getting tickets multiple times. Unlike other victims of this unhuman law, David went to all of his court dates and won.

What were you doing and what did you get tickets for?

My first ticket was, I was sitting in front of the homeless shelter at 10:30 at night waiting to go to sleep. My second ticket, I was over at the dollar store, pulling my information on my new phone out of my backpack to give to someone, and the sergeant gave me a ticket for pulling my stuff out. They fall under the same statute — sitting on a city sidewalk between 7am and 11pm, and the other one was for pulling property out during this same time.

You decided to got to court? What happened?

I think what they were counting on is the homeless people in Houston downtown not showing up. Then they could either put them in jail for two days and collect money from the government for having an inmate, or what they’ve been doing is putting inmates on community service at the Houston Food Bank.

Could these tickets be used to get homeless people to move without any concern about whether it will hold up in court?

The homeless are being singled out. I’ve seen outside clubs here people sitting on benches, drunk, and the law enforcement’s never run them off on this statute.

So under this law you need to keep walking at all times between 7am and 11pm?

Yes, I can’t even take my backpack off my back and set it down and rest for a few minutes without being in violation of this ordinance.

What do you want to say to Free Press readers about these laws?

I just ask that anybody who might read this in Houston to speak up and let them know. If the people are able to look at the records of the people who are getting cited on this, I think you would find that 99% if not all of them are homeless. No one other than that are getting this tickets on the civility ordinance.

————-
There is an old saying, ‘You can beat the rap, but you can’t beat the ride.’ Despite the fact that police, judges and juries know these laws are nonsense, police can continue threatening to write tickets to get folks to move, or actually write tickets that require folks to come to court for multiple resets before their actual hearings. Once folks miss a court appearance, additional charges accrue and put folks with few resources into deeper financial and legal trouble.

Kallinen has been seeing this for years, “No matter how many times most indigent people do not show up for court and then get a warrant for their arrest which the officers can then use to arrest the indigent when they are found downtown.”

Nick Cave doc and others