Leon casino, Calvary reteams writer director John Michael McDonagh with Brendan Gleeson. Both had worked together on McDonagh’s previous feature The Guard. Like The Guard, Calvary presents a view of life in a small Irish town with no clichéd conventions.

Calvary starts as serious as a heart attack. Brendan playing a Catholic priest is informed in the confessional that he will be killed in one week’s time by the shadowy figure on the other side of the screen. As Calvary unwinds we meet the denizens of the tightknit community, and wonder who was doing the talking. Co-stars include Kelly Reilly, Chris O’Dowd, and M. Emmet Walsh among others. Different people appear to have different motives, creating tension out of character development. 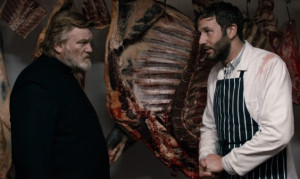 “Physically they were shot in two different counties: County Galway and County Sligo but there’s an overlap. The character of the policeman is in both films. I’d like to think of them as being in the same world, but it’s actually two different locations,” McDonagh says to Free Press Houston in a phone interview, about The Guard and Calvary. “I like overlapping characters. I want to do a third film that I’ll shoot in London that has some of the same characters from the first two films as well.”

In addition to helming those two films, McDonagh also wrote Ned Kelly (2003), about which he remarks, “I was on the set for about 20 minutes. I didn’t have a great experience on that film, although it paid well.”

John is the brother of Martin McDonagh the writer/director of In Bruges and Seven Psychopaths as well as a successful playwright. “Being the older brother I would read authors like Faulkner or Nabokov and then recommend them,” recalls McDonagh. “As regards to movies, which we would watch together, the ones that made the most impact were Badlands from Terence Malick, Charles Laughton’s Night of the Hunter, Scorsese’s King of Comedy. We were being influenced at the same time in our lives by movies but I would read more books whereas Martin is more into his own writing.”

McDonagh describes his process of writing: “I usually get the lead character first and have the plot and then build the other characters around them. But I’ve also thought about the screenplay for months before I sit down to write. I’ll sit down on the first day and try to write five or six pages. The next day I’ll re-read what I’ve written and adjust it. The next day I start writing again. If I sit down one day and have no ideas I’ll just get straight back up again. I’m not a big believer in struggling with writer’s block.”

McDonagh recalls writing The Guard in 13 days and Calvary in 19 days. “But I’d been thinking about the movie for six months before that.”