A Day in the Country

Leon casino, Imagine the cinematic thrill of finding a previously obscure film by one of the world’s great directors. Jean Renoir was no slouch in the 1930s turning out such acclaimed masterpieces as The Rules of the Game (La régle du jeu) and The Grand Illusion (La grande illusion).

In truth Renoir in the ‘30s was turning out great film after great film including the above titles as well as The Lower Depths, La Marseillaise, La Bête Humaine, the Communist documentary La vie est à nous, and the subject of this article, the short film, A Day in the Country (1936). A Day in the Country (Criterion Collection, 2/10) may be one of the most lyrical odes of unrequited love ever committed to celluloid.

Renoir, adapting a story by Guy de Maupassant, made this 40-minute short subject with a crew that included Jacques Becker, Henri Cartier-Bresson, and Luchino Visconti. The story proper unwinds in the 1880s, or the Impressionistic era made famous by fine artisans like his father Pierre Auguste Renoir. The plot revolves around a few quixotic characters who lunch in the woods and find, not true love, but memories that remain with them for the rest of their lives. 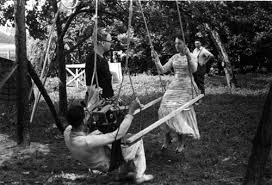 Some of the brilliant sequences depict a girl on a swing and a dazzling tracking shot of rain sweeping over an overflowing river. The latter shot begins with winds gently swaying the tall trees along the river, and then follow the waters upstream and the raindrop ripple bouncing off the flowing tributary. The former shot involved locking a camera into position on the opposite side of the femme going to and fro on the swing. On an extras reel we see the camera set-up, constructed on the other end of the swing is an extension of the swing with the cameraman obviously hanging on and maintaining focus as the fulcrum pivots back and forth. Other extras include an introduction to the film recorded by Renoir in the early ‘60s, as well as an interview with the film’s producer and a whooping 90-minutes of outtakes of the film’s footage.

A Day in the Country was never completed by Renoir but rather abandoned as he ran out of money, faced obstacles that included bad weather, and had other filmmaking commitments. Renoir had fled France during WWII and was never to return to this uncompleted project. After WWII, producer Pierre Braunberger completed the production that to this day remains a fascinating footnote to the career of one of the pantheon directors of the first century of cinema. The film was released domestically in 1950, and now is available in a rather sharp restoration courtesy of Criterion.

Keep It Goin': The Best of The Week

Wild in Houston: Off the grid and into the green