Leon casino, Thursday morning, a diverse group of Texans converged on the Capitol to promote a new campaign urging lawmakers to: 1) support comprehensive sex education, 2) increase access to contraception, and 3) repeal legislation that interferes with the doctor-patient relationship and severely limits access to abortion.

The multi-year “Trust. Respect. Access.” campaign promotes policies that would restore trust in Texans to make their own reproductive health care choices, respect for physicians’ medical and ethical judgments about the needs of their patients, and access to safe, timely abortion care. 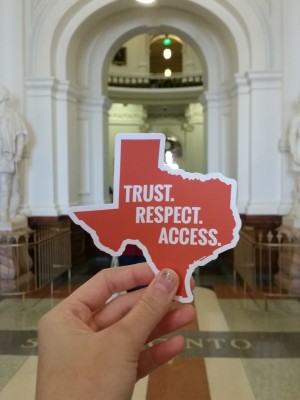 Organizations behind the campaign include the ACLU of Texas, the Texas Freedom Network, NARAL Pro-Choice Texas, the Texas Research Institute, Whole Woman’s Health, and the National Latina Institute for Reproductive Health.

Following a morning of lobbying, activists gathered on the south steps of the Capitol for a rally alongside coalition leaders and legislators. Kicking off the rally, Amy Hagstrom-Miller, president of Whole Woman’s Health, explained that this initiative is both a response to attacks on Texans’ rights and a movement to improve the future of Texas.

“Texans have endured tremendous political interference that has eroded access to quality healthcare across the state, all based on the lies of extremist politicians,” she said. “Today, we commit to change the conversation around abortion, reverse some of the most restrictive policies on reproductive healthcare, and push for more proactive legislation that protects and preserves reproductive rights.”

During the last decade Texas has seen the passage of many bills designed to make access to abortion disappear, putting thousands of Texans at risk. Since 2013, more than half of the state’s abortion clinics have been forced to close, leaving Texans without family planning resources and legal abortion services.

State Senator Jose Rodriguez (D - El Paso) spoke at the rally, stating that he has filed legislation along with his colleagues to repeal aspects of the 2013 anti-abortion bill, HB 2, that forces abortion providers to have admitting privileges at nearby hospitals and abortion clinics to meet ambulatory surgical center requirements. If HB 2 is fully implemented Texas will have only eight abortion clinics, leaving 750,000 Texans of reproductive age more than 200 miles from the nearest clinic.

Candice Russell shared her personal abortion story with the crowd, emphasizing the need for this campaign and how restrictive policies hurt Texans.

“I spent a lot of time fighting against HB 2′s restrictions – restrictions that I never thought were going to personally impact me. After realizing I was pregnant last year, I needed to travel to California to undergo my surgical abortion,” Russell said. “I haven’t decided yet if I ever want to have children in my lifetime. Right now I’m pretty sure I’m leaning towards no. But I can assure that if I do it won’t be because it is legislated.”

The “Trust. Respect. Access.” campaign is about more than just the legislation (both good and bad) that lawmakers will present this session. This campaign is about continuing a movement for reproductive freedom that will have a positive impact for years to come.

As Kathy Miller, president of the Texas Freedom Network, put it, “Today, we are all committing to a long, sustained effort to rollback the reckless attacks on reproductive health care and restore trust in Texans to make our own decisions about whether and when to have children without the interference of meddling politicians.”

Getting To Know The Locals of FPSF: We Were Wolves

SXSW Film: Julien Temple on The Ecstasy of Wilko Johnson