Decrease Font Size Increase Font Size Text Size Print This PageSend by Email
I first talked with Harrod Blank in 1993 when Blank was in Houston both attending that year’s Art Car Parade and promoting his documentary movie Wild Wheels, which documented art cars and was unspooling at the River Oaks Theatre. (Blank also has a book of the same name.)

Leon casino, A Poem is a Naked Person is a legendary film in the sense that it was never released upon its completion in the mid-70s, and only saw the light of the movie theater when it screened earlier this year at the SXSW Film Festival. 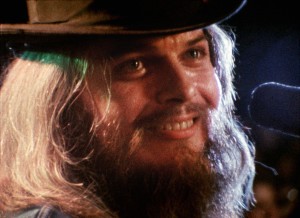 “There are a variety of reasons. One of them is that Leon was on a trajectory for stardom. He was a rising star and he probably had different expectations of what the movie should’ve been,” says Blank in a phone conversation with Free Press Houston. “I am sure he found all the periphery of his world not relative.”

Referring to this year’s festival screenings Blank notes: “At one of the Q&As, he said ‘There were too many sunsets and too much of Jim Franklin.”

Franklin is a mural artist known for his work that features surreal armadillos and who designed many posters for the legendary Armadillo World Headquarters in Austin. At the time of the film, Franklin was painting the walls of the drained swimming pool on Russells’ property in Grand Lake, Oklahoma. 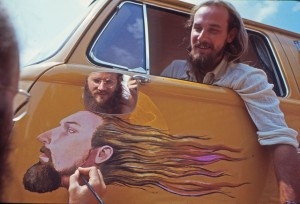 “Franklin’s actually in the film quite a bit,” says Blank. “Everything that was in that film that was not Leon Russell he probably called into question. The reality is Leon at that time didn’t like doing interviews and was kind of a private person. My father was there with a camera and he wasn’t granted the interview. That’s why Les went around filming other things.

“The film is a product of that relationship. Leon and Les and it is what it is. It’s pretty cool in the end, the way it worked out. Leon is warming up more and more to what it is.”

Les Blank may be best known for his documentary on the making of the Werner Herzog film Fitzcarraldo, Burden of Dreams. “Herzog was a good friend of my father’s and visited on occasion,” says Blank. Perhaps not without a sense of poetry Herzog showed up for a visit two hours after Les had passed away.

“When my father was sick and dying I reached out to Leon Russell and told him that Les was dying,” says Blank. “That opened the door for me to talk to him. So on a visit to Oklahoma we got together and Leon asked me: ‘What do you do?’” 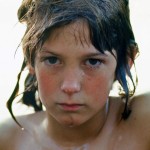 When Russell found out Blank fils had made the doc Wild Wheels he was convinced. “He asked me about art cars saying you mean a car covered in grass?” Wild Wheels is one of Russell’s favorite movies. “This is so random and so weird. From the beginning we made a connection with art cars. When I pitched to re-master the film he realized that I knew what I was doing.

“I was there too, I was a 10-year old boy.” Blank recalls about a sequence where mural artist Franklin is walking around the empty pool and herding what seems to be a large amount of scorpions into a bottle. “I was fascinated and terrified at the same time because there were scorpions everywhere. When I was there the pool had not been painted yet by Jim, and the scorpions would get stuck in that swimming pool. They couldn’t get back out.

“I also went swimming in a nearby lake everyday with my father. And the lake and the property that Leon had was one of the reasons that Les signed on to make the film,” says Blank. 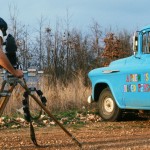 A Poem is a Naked Person was primarily financed by Russell and his then business partner Denny Cordell. “The movie was really the idea of his producer Denny Cordell. Mad Dog was so successful he thought they should do their own movie,” says Blank, referring to the music doc Mad Dogs and Englishmen (1971). MDAE chronicles a Joe Cocker concert on Halloween of 1970 at the Metropol in Berlin, but also includes frank footage of the tour. Russell was one of the mad dogs because he wasn’t English like Cocker who was from Wales. Russell wrote one of Cocker’s biggest songs, “Delta Lady.”

Cordell and Russell founded Shelter Records. An epilogue of sorts appears at the end of A Poem is a Naked Person with Shelter Records artist Willis Allen Ramsey singing at Russell’s in-house recording studio. Ramsey is known for the fact that he only ever made one LP, which spawned numerous hits for other bigger artists when they covered its admittedly excellent songs.

“Les was there for two years shooting the film. It was a home base for him,” says Blank.

Footage of George Jones who had dropped by for a visit highlights one scene. “There were other people who visited too that were not filmed. Like Bob Dylan. When Dylan came by he hid behind the door so that Les wouldn’t see him,” says Blank.

Other sequences, like a performance by Willie Nelson at Floore’s Country Store in Helotes, Texas, were lensed in an ad hoc manner. “That was a periphery of Leon’s world, Leon wasn’t even there. There’s other footage in the film that was filmed at different places in Oklahoma where they just happened to stop at and start filming. There’s Adair, Oklahoma where they filmed the marching band. There’s a goose grab and a pie-eating contest. Les would just film things that were interesting,” says Blank. “That’s why it’s in the movie.” 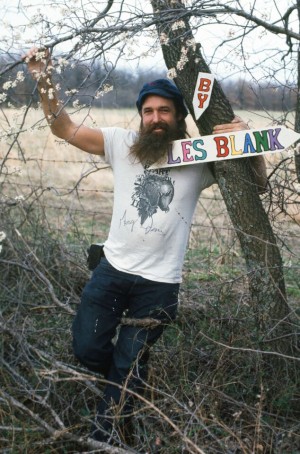 Concert footage and studio recoding footage of Russell shows him singing some of his sweetest tunes, like “A Song For You,” and “Rolling In My Sweet Baby’s Arms,” the latter an American traditional song.

A Poem is a Naked Person unwinds this weekend at the Museum of Fine Arts, Houston, with an additional screening on Friday, September 4.

Harrod Blank will introduce the film on Friday and Saturday night. “There’s an after thing on Saturday night, I’m not sure where the after thing is,” says Blank. “All the art cars are going to go to a location and hang out.

Harrod Blank currently has a film in production that he calls a 25-year journey through Burning Man. “This is my 23rd year of filming. Right after this screening I fly from Houston to Las Vegas, get in my rig, my art car and drive into the desert,” says Blank.

As a last thought on A Poem is a Naked Person, Blank remarks: “The movie is what it is because of the circumstances and that’s why it’s such an interesting movie.”

12 Bricks: The Best of The Week