Decrease Font Size Increase Font Size Text Size Print This PageSend by Email
As far as Americans in peril genre movies go No Escape is more than competent. Above average action sequences and a swift narrative that doesn’t waste time with exposition help propel the story. An Austin engineer (Owen Wilson) and his family (Lake Bell and two pre-school daughters) travel to his new job in a generic third world country that borders Vietnam.

Leon casino, All hell breaks loose just hours after the family arrives. Rebel militants are slaughtering foreigners. Wilson and family flee from hotel roof to another roof and through alleys and dark buildings for most of the movie. Pierce Brosnan co-stars as a mysterious Brit who seems to posses a special set of skills. If anything the director could have used less slow motion shots however the action remains tense if not exciting in a R-rated manner throughout. 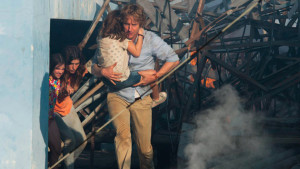 Perhaps not oddly, Ray Bradbury wrote a short story in 1953 titled And the Rock Cried Out about Americans being reduced to slaves after a third world revolt. This story was included in the first edition paperback of Fahrenheit 451. Interesting unrelated factoid: 451-degrees is not the correct temperature at which paper burns but rather an estimate that was given Bradbury when he called his local fire department.

No Escape when viewed strictly as an actioner has good hostility beats and for the most part works its magic on an undemanding audience. If you’re looking for logic as to why Anglos are to be hated and hunted down after a typical third world revolution goes down look no further than the continued exploitation of such countries for purely economic reasons. No Escape even alludes to this in a mid-movie speech from Brosnan. You feel for Wilson and Lake because they are just pawns in a corporate cogwheel who haven’t even had time to get ugly. Now someone needs to make a film about fourth world values. And even fifth world oppression, which I suppose would indicate we’re delving below the surface of the planet. 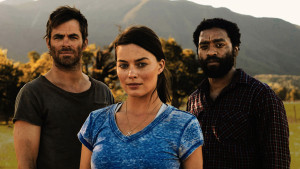 Z For Zachariah is a thinking person’s post-apocalyptic sci-fier. There are some tony performances by good actors and plenty of dialogue. ZFZ doesn’t want to be a Book of Eli style thriller but rather a more seasoned affair highlighted by rural values that clash with scientific reasoning.

Margot Robbie (sporting her authentic Aussie accent) has survived on her farm in a valley that has shielded her from the radiation of an atomic holocaust. One day a figure clad in a makeshift hazmat suit (Chiwetel Ejiofor) appears on her property. Robbie takes him in like a Good Samaritan. Eventually a relation develops.

Events become complicated when a third person (Chris Pine) also walks into the secluded valley. These three characters, the only actors in the movie, choose to talk about their feelings rather than get jealous or succumb to other emotions. Meanwhile Ejiofor devises a plan to build a millwheel to harness energy from a nearby waterfall.

The source material is the 1975 novel of the same name by Robert C. O’Brien who also wrote a novel that became The Secret of NIMH (1982). Film buffs will recall tropes from 1950s films like Five (Arch Oboler’s 1951 film about a post-nuclear world where only five Americans are left alive.) or more likely the inspiration for O’Brien’s novel, the 1959 film The World, the Flesh and the Devil wherein the three-person cast (Harry Belafonte, Inger Stevens, and Mel Ferrer) wanders around a vacant New York City. ZFZ’s director Craig Zobel previously made Compliance a modern cult classic. Z For Zachariah feels more like navel gazing.

The Editor & Being Evel