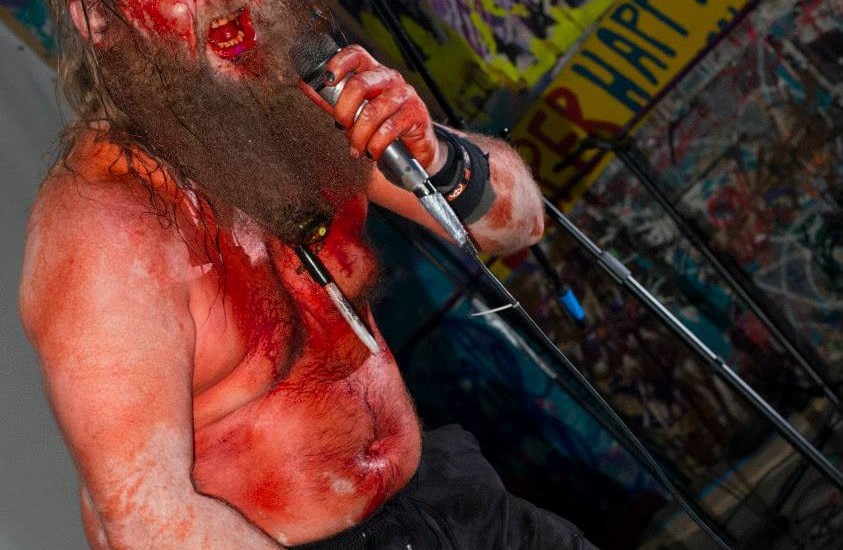 Contemporary Christian music has a bad reputation for being sappy, insincere and just plain unlistenable. For many of us, it conjures images of flashy infomercials, crooked televangelists and snake-handling zealots. Maybe if it weren’t so formulaic, this genre could hook new converts or at least more tolerance for Christianity at large in a country where so many people seem to be sick of it. David Larry Carroll of one-man act BlackMagicMarker shatters these preconceived notions with a very different take on this genre of music. The harsh noise and dramatic choreography are some of the most shocking aspects, but Carroll’s sense of humor is also a bit disarming, given that he’s technically a contemporary Christian musician.

Where did you get the idea to combine the Gospel with harsh noise and bloody theatrics?

I’ve always enjoyed crazy sounds like AM radio frequencies, squeaky dryers and rhythms of off-centered ceiling fans…putting mics up to motors and appliances like can openers. My first writings were to a squeaky dryer as my background noise, when I was 9 yrs old screaming at the top of my lungs. I still use some of the same lyrics, squeaks and noises in my stuff today.  When I became a follower of Christ, I wanted to tell everyone of Him. These “harsh” noises and punk rock was what I knew. Thought that was a unique form. Even did a noise show in a laundromat for southmorehousepresents, and they [noises] fit perfectly.  When I heard the graphic story of the crucifixion of Christ (as a teen), I saw very bloody, gory and vivid images, which I convey in my sets and hold up signs with scriptures of the Bible like John 3 :17-a staple of my belief system. God sent not his son to condemn.

It’s been two years since you last talked to us. What’s happened since then?

It’s been non-stop. By myself and doing performance art as BlackMagicMarker, I have been getting lots of requests to perform. Met new cool friends from all over the world.  Did the FPSF 2012 on the Super Happy Fun Land stage, The Lone Star Explosion, NOLA around Halloween and Continuum Live Art Series in November and December.

The last time I watched your performance, you included a segment called the emotional sidewalk. Explain that segment to us.

You saw part 3, Odd Thursdays at Super Happy Fun Land, 1/9/14. BlackMagicMarker was a featured act.  After was “TheGoryStoryofLove” tour: Houston, Austin, NOLA and wherever. A new kind of tour started called “The Emotional Sidewalk Pt. 1”.  I walked a lot…to and from the venues, doing bunches of open mics and theaters.  After performing, it was like my sense of hearing and sight was amplified, listening to and having conversations with the people who attended. Soaking in their hurts and feelings. After tour, I went into the studio, burdened over all I heard and observed. The song  “C.U.T (Christ Understands This)” came out of all this. I felt compelled to do”The Emotional Sidewalk Pt. 2” to the crowds that grew and grew. I put a Q&A in as part of the set as an outreach-a way of comforting the disturbed and disturbing the comfortable. Throughout 2013, part 3 is just starting: “Carrying the Burden”

Do you ever get flack from other Christians who think your act is blasphemous or offensive? What is your response?

Yes, some do.  I don’t respond, because everyone is entitled to their opinion. I encourage them to dig deeper, and I’m open to talk if they want to know why I do what I do. It’s not about me, but Jesus-period.

What would you say to skeptical people who don’t put a lot of stock in Christ and Christianity? Can they expect to get anything out of your act?

I let my art speak. Hopefully they like my stylings at least. Maybe recognize a few songs. I have added the classic “Jesus Loves You this I know ” and “Because He Lives” as a reminder that Jesus loves us still.