It’s not all fun and games here at Blu-ray Central. Every once and awhile your humble scribe has to hunker down and watch several discs of high art. By that I mean films with a lot of sex or zombies and devil worship. That is after all the bread and butter of both independent and mainstream filmmaking. That is also why for the most part such excursions into attempted cinematic brilliance are merely reasonable facsimiles of what has come before.

Starry Eyes (2/3, Dark Sky Films) follows an aspiring actress in Hollyweird who is offered a lead role in a film. You would think the fact that the producers wear pentagram necklaces would be a tip off that the price of stardom is selling your soul to the Devil. Not a lot of surprises here. 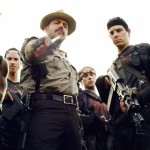 Zombie Killers: Elephant’s Graveyard (2/3, Anchor Bay) unwinds like a good episode of Walking Dead. A rural community protects themselves from a zombie plague by maintaining a military wall against any invaders. Billy Zane appears to good effect as a kind of arms trainer, while Dee Wallace is blink and miss in her role. The best part would be main characters being killed off and occasional dark humor. 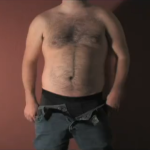 Dick (2/17, Indiepix) literally is a documentary where men of all shapes and sizes talk about their dicks. The men are framed full body (naked natch) with the top of the frame at their neck, making the whole affair rather clinical and like a children’s television show where you never see the faces or heads of the adults. Even at an hour running time there’s way too much information on display.

Maison Close: Season One (2/10, Music Box Films) presents costume drama with a twist. In 1871 a Parisian bordello operates under control of the government. The tight knit community of sex workers occasionally coming into conflict with economic and societal forces, more often than not represented as rich men. More interesting is the attention to period detail and the structure of authority starting with the masquasse (head mistress) and leading down to the stony ones, the “whores at the bottom rung of the ladder.”

Season One director Mabrouk El Mechri also helmed the sardonic JCVD (2008). Less interesting are the actual sex scenes the majority of which are shot like something from Eyes Wide Shut. All the angles of people shagging are covered with the sterile preoccupation of R-rated films that always place obstacles or corsets in front of revealing poses. Nonetheless, Maison Close certainly has more sex than other television shows with high pedigrees that are set in the world of commerce, say, The Paradise or Mr. Selfridge.

Through the Wringer: One Woman’s Trip Through Harris County Jail