Can Anyone Solve Houston’s Traffic Problem? 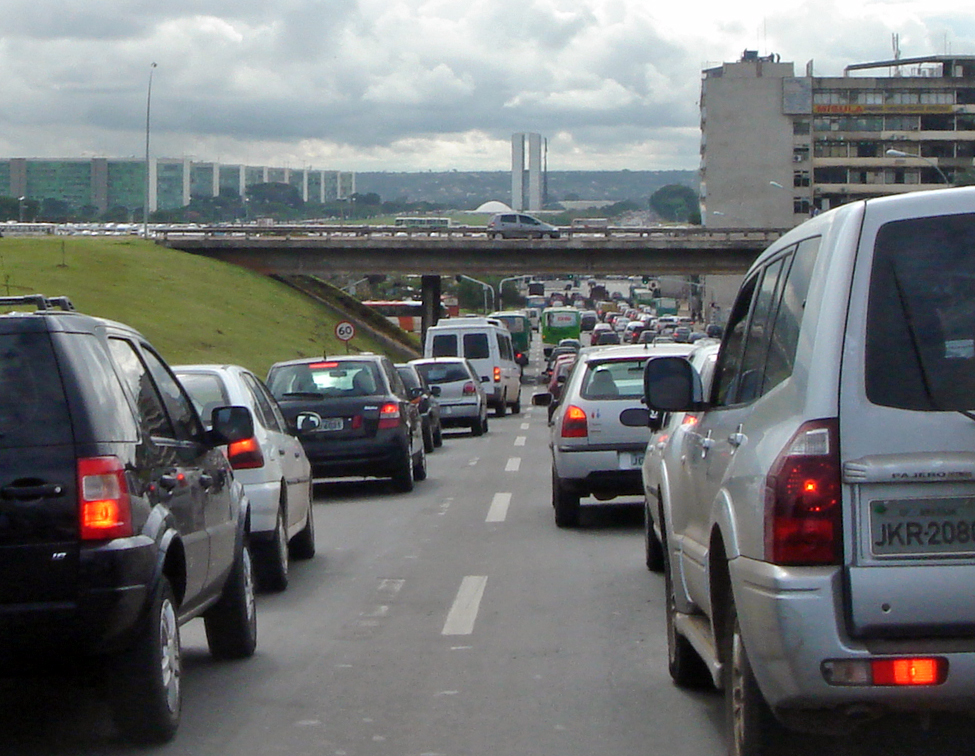 I was driving to work along one of Houston’s crowded corridors. Cars packed the freeways, inching forward a few feet at a time. Basically, a regular morning in Houston.

Then the truck next to me decided that it wanted in. It looked like an eighteen wheeler with bricks instead of a storage box on the back. It calmly signaled its turn and waited for an opening to transfer.

Oh, right. That’s not what happened at all. It cut into my lane with no warning and almost crashed into me.

In retrospect, it was probably the only way that guy could change lanes. Nobody was going to leave an eighteen-wheeler-sized gap in bumper-to-bumper traffic because people here drive like lunatics.

Houston traffic sucks. Every morning this city gets swamped by 836,000 cars, trucks and vans hellbent on getting to work right this minute. Our roads are packed, and they’re only going to get worse.

Houston is the fourth-most populated city in the United States. The 2010 census put our population at 26% higher than in 2000. The city consistently ranks on Forbes’ list of the fastest-growing cities in the country, earning the title of “America’s next great global city.”

More people means more drivers means more traffic. That means people get to work later, can’t get as much done, and don’t get paid. Time counts, especially for low-income workers juggling two jobs. And sitting in traffic is incredibly annoying.

Driving in general is a nightmare. It requires more roads, more gas, and more space for parking. Imagine how much exhaust goes up every day from Houston commuters.

We need something to solve the commute. With more immigrants every year, we need a way to get everybody to work on time. But how?

One solution coming from Houston Metro is a revitalized bus system. Metro wants to redesign its transit system to create a smaller network of high-frequency routes.

The proposed routes connect major population centers to Houston’s current job centers instead of just the downtown. You’d see a lot more buses on 15-minute intervals, even on nights and weekends.

Jarrett Walker, a consultant who helped redesign the routes, said people will take to buses more (and out of their damn cars) if Metro offers better service.

“The thing you have to remember is that there are people in all kinds of different situations,” Walker told me. “People are everywhere on the spectrum of income.

“When people already have a good reason not to drive–like owning a car is very expensive–many in low income families would get ahead financially for every adult.”

Buses can use our pre-existing road system and require little infrastructure investment. Walker’s plan is particularly attractive because it requires no additional funds.

However, the Metro needs some work. The buses are old and often arrive at irregular times.

“Buses inside the loop have roaches, bums, AC units that drip water on you,” complained one Yelp commenter. “Inside the loop I have had to email them multiple times to complain about buses being late and nothing changed.”

Then there’s the urban sprawl issue. Walker’s blog says only 0.5% of people live more than a half-mile from the closest bus stop. This makes the new bus system a good fit for Houston as it is, not Houston after another 10-20 years of urban sprawl. What happens when people start moving farther beyond the current route?

Buses can help Houston, but the new system will require more investment in longer routes as the city expands.

The Problem With the Solution

The toughest part about trying to solve traffic is people may not even care if it’s solved. They might keep driving cars anyway.

A study in Transport Policy from Italian researchers found that people will choose cars even when they’re more expensive. That study hails from a country with more public transportation than the United States- just imagine how Americans would respond.

Cars offer undeniable benefits. You go exactly to your destination and don’t have to share a bumpy and uncomfortable bus with strangers.

Brown said he often asks people waiting for a bus how long they’ve been waiting. He claims they respond with 30-45 minutes.

“If you spend some time looking at the way Los Angeles is, the level of support for all forms of public transportation in Los Angeles, including bus service, it’s pretty clear things are changing in this respect,” Walker said.

One Response to Can Anyone Solve Houston’s Traffic Problem?