Leon casino, There have always been competing projects in Hollywood. Think Tombstone and Wyatt Earp, or Armageddon and Deep Impact. In 1995 the Warner Brothers film Outbreak told the story of an airborne virus and subsequent attempts to control the epidemic. But this all-star vehicle had been rushed into production when another studio was in pre-production on a similar film.

20th Century Fox had been developing their own ebola-themed movie based on an article by Richard Preston titled Crisis in the Hot Zone. First Jodie Foster was attached with Ridley Scott as director, then Robert Redford came aboard, and as additional versions of the script were revised to suit each star the whole project lost momentum and was never made.

There’s a scene in Outbreak where we see a person we know has been exposed to the virus sitting in a crowded movie theater and coughing. The next shot is a kind of camera-floating-through-the-air-above-the-heads-of-the patrons shot meant to convey the point-of-view of the virus. When I saw Outbreak I had some minor sniffles before I went that became a full-on fever with pneumatic wheezing coughing as the movie unwound, and perhaps not oddly peaked during the aforementioned scene. I don’t bring this sad incident up because I think it’s funny; it’s actually rather embarrassing. The point is in a theater nowadays if someone is displaying similar symptoms the audience might respond in unison to return to Dallas. 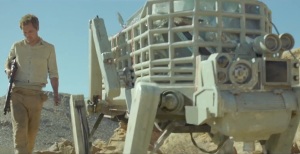 The greatest sleight-of-hand that Bill Murray pulled off was convincing the world that he’s a dramatic actor as opposed to a comedian. Which is true. In St. Vincent, Murray gets a chance to shine with some serious acting (accent, emotions) chops. The thing is, St. Vincent unwinds like a dramedy and everyone in it who is usually known for being funny is absolutely stone faced as they deliver their lines. This includes Melissa McCarthy and Chris O’Dowd, and to a lesser extent the more dramatic performers Terrence Howard and Naomi Watts (playing a Russian prostie with a heart of gold).

Young Ones offers intelligent sci-fi in a tidy package. Michael Shannon tries to support his family in a not-too-distant future that has an apocalyptic edge. Young Ones reminded me of a striped down version of the 1970s A Boy and His Dog. No underground cities or subliminal themes of regeneration but plenty of makeshift cities in the desert. There’s also a robot that’s pretty cool. Nicolas Hoult and Kodi Smit-McPhee, both youngsters looking to break out of their former kid stuff roles like Jack the Dragon Slayer and ParaNorman, play the son and a rival for Shannon’s daughter (Elle Fanning). Jake Paltrow wrote and directed and shows a firm hand for depicting the drama inherent in the situation. 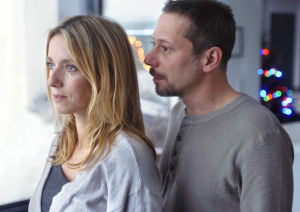 Domestic audiences will recognize Mathieu Amalric as the villain in the Bond film Quantum of Solace, while auds familiar with foreign films will recognize the star of films like The Diving Bell and the Butterfly and the Mesrine series. Amalric was also in The Grand Budapest Hotel.

Amalric has written and directed (and stars in) a top-notch thriller based on the novel The Blue Room (by Georges Simenon). Like a hazy stream of consciousness the story unwinds from an illicit affair to the murder of Almaric’s wife to a series of police interrogations and an eventual trial. Each step along the way is shrouded in ambiguity so we only get a partial glimpse of the truth until the end when all is clear. In French, The Blue Room is currently in an exclusive engagement at the River Oaks Three.

An American Girl in France