Leon casino, For every fan of classic French film as well as affectionados of foreign and art films comes Renoir. A biography of sorts this handsome movie depicts the late years of the impressionistic painter Auguste Renoir. But that’s only the tip of the iceberg. Renoir is really about the model who became a kind of muse to Renoir and subsequently became the wife of Jean Renoir the famous film director.

We’re first introduced to beautiful actress Christa Theret as Andrée Heuschling as she fibs her way to a meeting with the master painter. Even as she disrobes for a session we don’t feel any kind of sexual spark so much as a serious working relation of a model and an artist. Enter Jean (Vincent Rottiers)  back from WWI and with a rather nasty leg wound. Soon the magnetic attraction between them becomes obvious. Eventually they would get married and Andrée would star in most of Renoir’s silent films. They were divorced in 1930. If the average bear is familiar with the cinema of Jean Renoir at all it would be for his later sound films like The Rules of the Game and Grand Illusion among others. But those who know will recognize the efforts the film Renouir goes through to establish Jean’s growing fascination with movies. One scene in particular shows him experimenting with the then primitive tools of the trade (a camera, a screen). 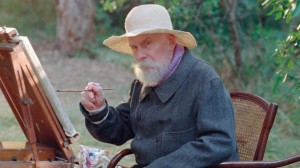 In real life Jean Renoir made films first in France and then came to America (during WWII) and made some great films despite being a slave to the studio system (like Swamp Water, The Southerner, Diary of a Chambermaid and The Woman on the Beach). Eventually Jean Renoir made other films in India and Europe and also wrote a book about his father.

Director Gilles Bourdos captures the colors and swirls of Renoir senior’s paintings and all of the outdoor scenes are stunning in their idyllic beauty. Another character, a young lad Coco Renoir, would also work with his brother on later films. As a petulant kid he also becomes the eyes and ears of the audience when he asks Andrée to show him her tits. Although she refuses we have already seen what he wants to see and we know that form and aesthetics are the order of the day.

This review originally ran in May, 2013. Renoir is playing exclusively this weekend at the Museum of Fine Arts, Houston.