Ninety-eight percent of my viewing is of feature films so for a television series to captivate me says something about the quality of said production. Downton Abbey doesn’t do it for me, and Modern Family doesn’t rock my boat. Sherlock was okay mainly because of the production value but by the third season I was wishing they would get back to reimagining the original Doyle stories and quit repeatedly bringing back characters from the dead. House of Cards was of some interest but has hardly lit a fire underneath my seat to compel me to want more. Luther was intriguing but I don’t know where they can take it without running out of steam. Game of Thrones feels like a medieval soap opera.

True Detective on the other hand unwinds like an eight-hour feature film. Matthew McConaughey and Woody Harrelson star as Detectives Rust Cohle and Marty Hart. McConaughey took an award home for Best Actor in a Leading Role, but Harrelson should certainly have been honored as well for his villainous supporting turn in last year’s Out of the Furnace. 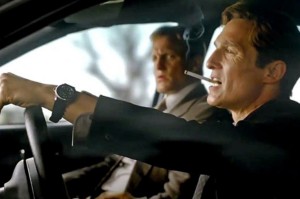 In the last few episodes we have witnessed the greatest meth lab bust ever recorded. We’ve seen Hart and his wife (Michelle Monaghan) divorce while she’s also had a very brief and bitter affair with Cohle. “Get outta here, you’re classing up the place.” The series has clearly delineated its three separate timelines: 1995, 2002, and 2012. When the temporal flow jumps to and fro it’s not as abrupt as in the opening episodes. We’ve seen Hart beat the shit out of a couple of young boys who had sex with his 14-year old daughter. At the conclusion of episode seven the two CID detectives who are investigating a similar murder in 2012, and questioning Hart and Cohle, Detectives Gilbough and Panania (Michael Potts and Tory Kittles), have for the first time in the series left their office and all four characters are (in different cars) racing to what has to be the most exciting conclusion of any story in recent memory.

Episode eight will air on HBO on March 9, and promises to explain the connection of the Yellow King to the Tuttle family and the Dora Lange murder. Writer Nic Pizzolatto has also written the novel Galveston and is attached to a remake of The Magnificent Seven. Director Cary Fukunaga has previously directed Jane Eyre and Sin Nombre.