Leon casino, A butterfly flaps its wings in a South American rain forest and halfway across the world a profound French comedy is made. Such is the way of the world. In what has become an annual event the Museum of Fine Arts, Houston presents the Gallic fave Five Funny French Films (Friday – Sunday, February 27 – March 1).

The French Minister hits all the right notes as a political satire. There’s little doubt that Tavernier, who presented a program of films at the MHFA in the late-90s, is the greatest living French director. 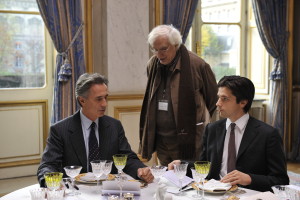 In the ‘90s his films were common art house fare. More recently Tavernier filmed an adaption of novelist James Lee Burke’s character Dave Robicheaux in Louisiana, In the Electric Mist (2009) with Tommy Lee Jones headlining a great cast that included Levon Helm, John Goodman, Peter Sarsfaard, and Kelly Macdonald. Tavernier is a student of pantheon American directors like John Ford, and the austere nature of his direction shows that he’s willing to take a sidewards glance at the most absurd political situation.

An aspiring political speechwriter gets sucked up into the vortex of the Ministry of Foreign Affairs. Hilarity ensues. It would be easy to conjure up American films like Wag the Dog, or Oliver Stone’s W., or the television series The West Wing, and even the British satire In The Loop. The French Minister offers all this and more. But Tavernier isn’t Stonish, or Sorkiny, or even snarky.

Tavernier doesn’t telegraph his intentions so much as build tension in a series of escalating sequences where the protagonist must constantly revise a speech the Prime Minister is giving to the United Nations. Meanwhile, in the wings, a civil war brews in a fictional country. Our hero goes through so many revisions of his 10-page script you would think he was writing for a Hollywood mogul.

The French Minster stars Raphaël Personnaz as the neophyte thrown into the political maelstrom, and venerable French actors like Niels Arestrup (who won a César Awarad for this role) and Thierry Lhermitte in the titular role. Jane Birkin has a cameo in a sequence that advances the characters but not the plot.

The Trick Was to Surrender to the Flow: A Tribute to Harris Wittels

Wyatt Cenac: From “Brooklyn” To Houston

Eye Candy — The Eyes Have It