I would guess that when you see another festival pop up, you approach it with a hint of ease, as it’s another festival.  The live music landscape seems to have festivals popping up all over the map.  Texas alone has more than their fair share, and when there’s a new one I always want to know who’s involved and what their intent is.  Enter Float Fest in San Marcos.  As a guy who lived in San Marcos and who had Butthole Surfers’ bassist Jeff Pinkus and Didjits’ bassist Doug Didjit as my neighbors; the fact that the festival is a thing peaked my interest.  However when I chatted with founder Marcus Sederman, what I found was a guy who loved San Marcos as much as I did, a guy who loved music as much as I do, and a guy who just wanted to do something cool for two things he really holds dear.  FPH was lucky enough to grab his ear recently for a quick chat about the festival, in it’s second year; and where they came from as well as where they’re going.

FPH:  The festival might have one of the more interesting concepts for a music fest, where did all of this start and how long did it take from concept to reality?

FLOAT FEST:  The concept started in June of 2012, and today is the reality.  Originally we had wanted to do it in 2013, but we had to push it back a year, which wound up being for the best.  Last year, our first year had one day and because we wanted to start off small, we turned a profit.  The concept began when my now wife and I would head down to Don’s Fishing Camp back when Don would collect your two dollars in a mailbox and you’d go party on the river.  Back then I had the idea but not the money.  We look at the festival like Texas BBQ, keep it slow and low.  Starting small and building it up to where it grows organically.  This year we’ve expanded to three days and we have Texas artists in the day with the national acts coming on in the evening.  Because we’re proud to be San Martians, and because floating the river is almost a rite of passage for most Texans, we feel like doing it here and including floating just makes sense. 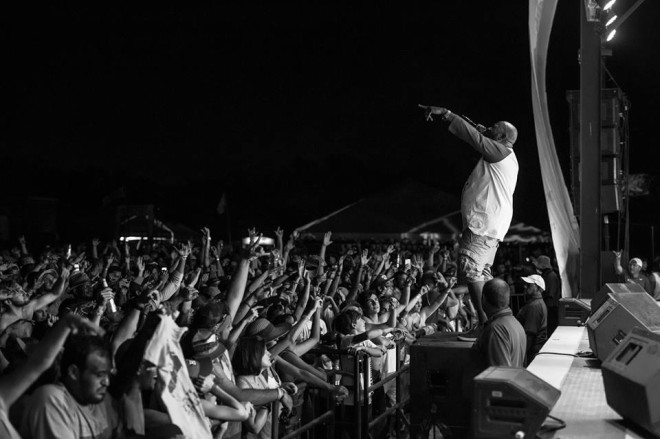 FPH:  The fest last year had a lineup with some Houston artists attached, and this year there’s more with Wrestlers, Paul Wall, Bun (B), and Devin (The Dude), are you guys getting any flack from central Texas for all the H-Town love?

FLOAT FEST:  Not at all.  Everyone who attends has been really cool and they love the fact that they’re all here.  Central Texas loves hip hop so I figured why not introduce them to the legends of hip hop while bringing the culture of Houston hip hop here so they can see where it all came from in Texas.

FPH:  I used to live in San Marcos, and I know where things are held; can you tell people why you chose such a small town to hold the festival in?

FLOAT FEST:  Because I had a history in San Marcos, I knew the owners of Don’s Fishing Camp.  Originally we had wanted to hold the festival there, but we couldn’t make it work out.  When that happened, a local ranch owner stepped up and offered his property which we’ve made our spot.  Up here, there’s three rivers and because the Comal River is so popular, we wanted a space where it all worked.  We wanted a space where we could grow because a festival needs lots of space, so we ultimately went with the San Marcos River.  It’s always a cool 72 degrees, and it’s the longest known spring fed river; plus it’s a bonus that everything behind our concept just works well with it.

FPH:  There are some added features alongside tubing, camping, and of course the music.  Can you explain the Field Day experience and the cardboard canoe regatta?

FLOAT FEST:  The two with Field Day and the Regatta are set up to have things to do between acts.  The field day has a photo booth alongside tons of activities, where the regatta is building canoes out of materials and the one that sinks last wins.  The prizes are all over the place while including ticket upgrades and artist meet and greet packages.

FPH:  Will attendees see any surprises this year as we get closer to the start date?

FLOAT FEST:  There’s plenty of surprises in the works as well as a contest called River Royalty that’s really cool.  People should like us on Facebook and keep checking our website as we’ll drop all of the details soon.

You can check out all that Float Fest has to offer this year in San Marcos.  The three day festival combines camping, floating the river, and tons of music.  This year the fest will host the likes of Dr. Dog, The Bright Light Social Hour, Ghostland Observatory, Mute Math, Phantogram; and many more.  The tickets cover everything you’ll need, and are an overall bargain considering all that’s involved in the festival.  If the festival is anything like their founder, then it should be three days of fun, music, and Texas in the spotlight; making the festival a true player in the world of music festivals.

Bernie Sanders in Houston Sunday, While Clinton Does a Weak Imitation

What Happened to Sandra Bland?