Leon casino, BEHOLD ME! For my love of dark, twisted steak nights permits me a new distinction— The Steak Knight of Houston.  Armed only with intestinal fortitude aided by my right handful of bran muffins, I will dig deep into the underbelly underbelly underbelly of the underbelly of the steak night scene in Houston… and it will be done in five days time.  (Normally, I would lie to you and dramatize this short fuse on account of some “deadline”)  The profoundly insidious steak night scene of Houston will be exposed for all to see in a mere five days for TWO very important reasons.

Reason #1: I’m off this week.
Reason #2 (and this is the important one): if I eat “steak night” for six days straight, I will die; so that’s why it’s five days.  Steak Night Week is not the endgame here;  Lobster Bisque Month is.

The Steak Knight Begins
In order to properly insert myself into the steak night scene I would clearly need to start slow— move around the outside a bit before just walking off the street and plunging into the hyper-exclusive back alley steak night behind Pete’s Fine Meats where flamingo tacos and bison steaks infused with lion fat are served (making wild & irresponsible assumptions is my thing).  With this strategy in mind and the fact that it was Monday, I selected Under The Volcano to be my first step into a guaranteed health descent.

Their steak night goes like this photo evidence here:

Why wouldn’t I ask for the 16 ounce strip steak?

That carried on for a while until I stopped caring about what cut of meat I was served because I didn’t want to be the type of tight ass that cares about what cut of meat he is served at steak night on a Monday when he knows full well he’s going to be eating steak all fucking week long anyway.  It doesn’t FUCKING MATTER!  THAT’S NOT THE POINT OF THIS STORY!  WHY DOES MODERN JOURNALISM MAKE ME FEEL LIKE I NEED TO COMMENT ON THE— nevermind.     I ordered strip but got ribeye.  I’m almost positive it was a ribeye. I know I ordered a strip.  Let’s move on. 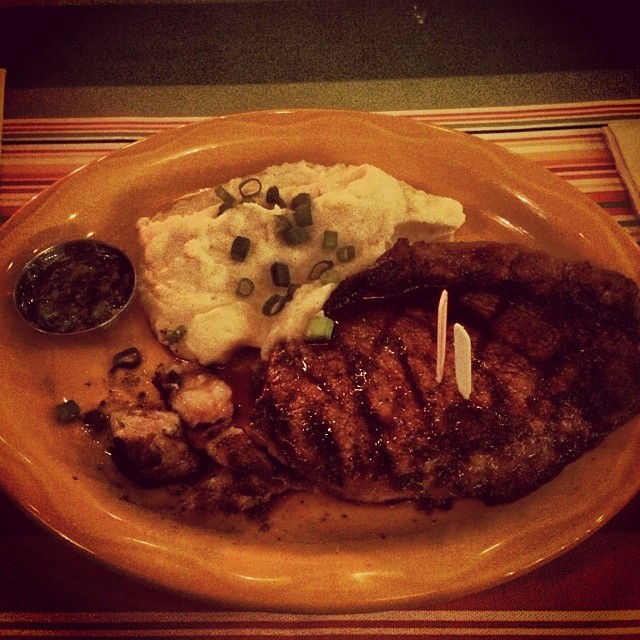 Other than the cut of meat mixup, the meal went exactly as advertised. Naturally, the salad came out first. It was delicious with its vinaigrette dressing and its Oaxaca cheese crumbles and let’s just not waste anymore time talking about a salad, shall we? Good.

When asked how I wanted my steak cooked, I responded with, “Stop cooking it exactly four moments before it reaches medium.” This caused the server to flaunt her extensive vocabulary by asking me, “Medium-rare Plus?” I nodded in agreement, trying my best to conceal the fact that I had never heard that term before.

The steak was served with “garlic mashed potatoes” and a chimichurri sauce.  I’ll address the concept of garlic mashed potatoes shortly; but for now, let’s have a one-sided discussion about chimichurri sauce.  Chimichurri is a sauce used on grilled meats; it’s a kind of Argentinian condiment, you might say.  Hand to Jesus, it’s better than ketchup but I’m not sure I’d make a regular habit of eating my steak with it.

What the Under The Volcano Steak Night lacks in creativity and imagination, it makes up for with amazing beverages and ambiance.  Seriously, it’s one of my favorite bars with great frozen drinks and a jukebox not connected to the internet.  The steak was cooked perfectly, which was nice.  Not so impressive on the taste side of things, however.  In any case, my expectations for my first Steak Knight outing were met and I plan to return on a future Monday night.

Tuesday, my duty takes me to D&T Drive In.

A dark and ugly monster eats food in public.