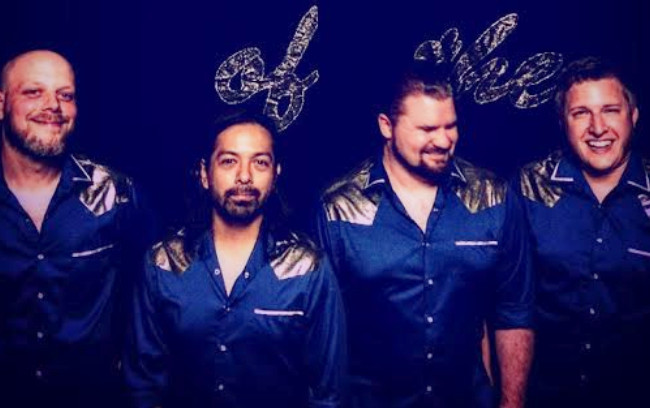 Sometimes in this job, I realize how crazy the music industry, as well as several components to it can truly be.  Often cutthroat, there are pieces of the industry itself that are as tough as getting noticed in today’s crowded music space.  Imagine that you make an album that you have wanted to make for two years, and then you lose your drummer.  Instead of releasing it, you find a new guy and re-record the entire thing.  Then, once it’s mixed and mastered, you wait over a year for it to get pressed.  Not because you can’t afford to, and not because you’ve done anything wrong; but because the larger labels can dictate who gets their items pressed first at large pressing plants.  It sounds like a story that I just made up, but it’s exactly what happened to Houston’s Knights Of The Fire Kingdom.  For almost two years, I’ve had what would eventually become their first full length release, “Knights Of The Fire Kingdom” on my phone just eagerly waiting for its release date.  Well, that day has finally come and more than any other record I’ve reviewed, I’m pretty sure I can write the review for this one off the top of my head.

I think Knights is one of those bands that most would say that they come off stronger in a live setting, but this record gets very close to their live set.  Sure, you can’t watch the band perform in matching outfits, but with the opener, “No No No No,” the energy comes through loud and clear.  Complete with distorted vocals from singer Jeoaf Johnson, the rhythm guitar from Johnson and Chris Wertz that gets layered by the lead riffs from guitarist Aaron Echegaray is pretty amazing.  The song has the opening track feel that you want most rock records to contain.  It’s like a call to the listener that their world is about to get rocked.  The band follows this with the intense and head bopping pace of “Chinese Dragon.”  The way these guys play together is pretty impressive.  There are times where it feels like drummer Matt Garcia and bassist Dave Noske craft a flow while guitar glided in and out like it should.  The track is straight-forward rock n’ roll, but, has the intensity of sounding like it should be on a grander stage.  Backing vocals and a searing guitar solo just add to the fact that the band sounds more cohesive than most rock bands going today.  Add to that, a breakdown at the latter part of the song, and what you’re left with is one of the stand out tracks on the album.  It’s one of those songs you could easily hear coming out of car windows full of pot smoke and teenagers.

The anthemic and rhythm heavy “Church Of The Retarded” comes in as the third song, which was the song from the band’s lead video.  The principle of (Keep It Simple Stupid) is all over the song, in that there’s nothing overly complex going on.  However, that’s a good thing, as the song is like many from the band in that they’re performed to keep the party going and not to ever slow it down.  The chorus alone is enough to where you could imagine fists pumping into the air singing from the crowd when it’s played live.   The band mixes it up a bit on the fourth track, “White Out V Math,” where they come on a half step slower with a more complex guitar lead in.  The way in which they employ sing song backing vocals with a less muddy guitar and Johnson’s vocals singing atop, is pretty impressive.  The breakdown on the song keeps it from sounding too formulaic, while the rebuild to the end makes it all their own.  The band keeps the half step vibe going on the slower sounding “Fun Boys” but really stands out on the following song, “The Body’s Gone.”  Another exceptional song on the album, it sounds unlike any others on the album.  The single guitar opening with a slower gait that has secondary guitar noodling along in the forefront is pretty staggering.  Johnson’s growl is more vulnerable while he sings at the slowed down stride, while the band adds a backing vocal track that feels more like old Weezer.  The way in which the band keeps the upcoming chaos under wraps while building up to it is masterful.  Then things break up, the instruments all play their own roles, and things go off like a small bomb.  The song ends shortly after, but in the time from start to finish, KOTFK set themselves apart from the rest of the rock herd.  They keep it a little slower and more melodic as well on the seventh song, “Empty Days.”  What starts as almost a ballad, quickly gets the distorted build up and head bopping rhythm you’ve gotten from the tracks prior.  There’s a melodic guitar track that comes in and out of the track that adds a whole new element to the band’s rockin’ sound.  When that guitar comes back towards the end, you realize that KOTFK has their own sound going, and it’s one that you can easily get down to.

The final first-rate track on the album, “Waiting For The Phone,” starts as bombastically as the previous ones.  The mix of distorted guitars and drums thunderously pounding makes you think things are going one way, before the band slows the song down for an almost different verse, before bringing back that break neck pace.  They seamlessly do this while still adding that crucial third guitar while Johnson howls on the chorus.  It’s so different, yet the same, that you kind of wonder why this band isn’t receiving more praise.  It’s almost like a ballad but the elements involved just make it more of a slowed down jam, and it’s definitely one of the best crafted songs of the nine.  When the band finishes off the album, they do it with the more chilled vibe of “Turn The Lights Out.”  Clocking in at just a hair shy of five minutes, the longest song on the album has this intriguing slow boil kind of sound.  There’s a meandering guitar track throughout the entire song that adds such depth with it’s complex nature.  You have to listen a couple of times before you notice it, but it’s actually a brilliant move that makes the song more inviting to the listener.  The band then takes the track into this slow psych jam while the pot still boils, and the energy inside keeps getting higher and higher.  When that energy pops, the band lets it out with a focused jam that closes the album off better than most rock bands do, and leaves you wanting more.

In a time when you aren’t hearing a ton of straightforward rock albums, Knights Of The Fire Kingdom drop a doozy on the music world.  In just a little over thirty minutes, the band gives you a cross section of what every rock band should be doing while keeping things interesting and inventive.  You can get your own copy of the physical album, when Knights Of The Fire Kingdom play their album release party on July 3rd.  The all ages show at Fitzgerald’s will also have We Were Wolves, Satellite D’Homme, and Brand New Hearts with doors at 8:00, and a FREE cover for 21 & up, and $5.00 for the kids; as well as some FREE shirts with album purchase courtesy of Caught In Customs.

Me and Earl and the Dying Girl