Added on August 21, 2015  Michael Bergeron  The Diary of a Teenage Girl , The Look of Silence

Decrease Font Size Increase Font Size Text Size Print This PageSend by Email
“The past is past. I don’t want to remember it.” So says the leader of a death squad in Indonesia circa 1965 - 1966. Death squads killed an estimated 1,000,000 people during this time. Death squads that were sanctioned by the then ruling government. Anyone who didn’t adhere to the government’s views were deemed communists and readily put to death. 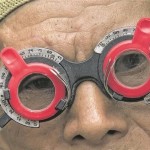 Leon casino, Joshua Oppenheimer’s The Look of Silence, a follow-up to his previous doc The Act of Killing, consists of testimonies of members of the death squads and their victims. There are some confrontations and conversations between the various sides of the conflict (and their relatives) trying to make sense of what happened 50-years ago.

At times Oppenheimer uses surreal film techniques such as showing the testimonials in different formats, like unfolding on a television screen with the television set in the center of the frame. Or, showing talking head testimonials with the speakers wearing an optometrist eyepiece as a metaphor for the title. Get it; we’re looking at the silence.

The Look of Silence never pulls its punches, yet it’s disturbing to see the perpetrators of the genocide bragging about the nature of their torture and execution with such bravado. If you think watching a documentary like this will be a spiritual experience or will fulfill some kind of Buddhist karmic retribution you’re misguided. The Look of Silence is a terrible film about terrible people. 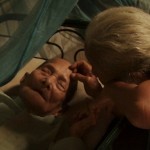 The Look of Silence will unwind in an exclusive engagement at the Alamo Drafthouse Vintage Park starting this weekend.

A film that moves like a sprite dancing through the woods and yet has a disturbing thematic aftermath will be welcome to lovers of no-compromise filmmaking. There’s a thin line high above the ground that a filmmaker walks with a delicate balance between the art of erotica and the rallying call of perverts.

The Diary of a Teenage Girl specifically details a 15-year old girl seducing her mother’s boyfriend. The purely sexual affair takes on a feminist point-of-view as we see the tawdry affair unfolding through the eyes of Bel Powley Minnie) a pouty-lipped young actress who now has a calling card as big as a mountain. Her mom (Kristen Wiig) seems despondent most of the time, brought low by her single status or as the result of constant drinking and snorting coke. Minnie’s lover (Alexander Skarsgård), while he might be over a decade older than her, watches television at a 12-year old level. 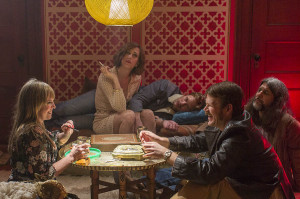 As for Minnie – she just wants to draw comics. The action is set in the 1970s. The film is washed out with desaturated colors and constantly blown-out close-ups. The comics are drawn in the style of Robert Crumb. Portions of the film revert to pen and ink style animation, which propels narrative portions of the film.

At times I felt I was watching something Lars von Trier would’ve done as a follow-up to his Nymphomaniac series of films. TDOATG is that provocative. At times the action is arousing with a capital A. Other times there’s a definite feeling that the whole society depicted in the film is doomed for extinction.

Despite being relentlessly exploitative The Diary of a Teenage Girl delivers a rousing portrait of a young person forced to mature at a rocket-fueled pace and the consequence this has on everyone around her.

Ultimate Justice and Art About Town