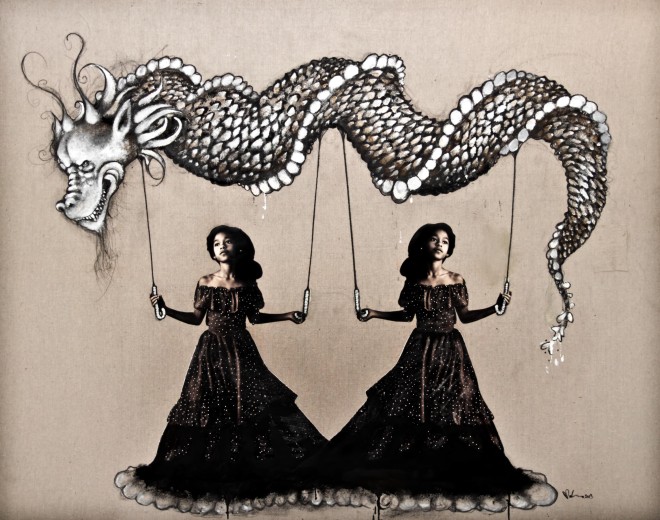 A love story that began with a photographer and a painter/sculptor has produced a wildly creative and imaginative pairing over the years. For well over a decade Katy Anderson and Patrick Medrano have been submerged in the arts in Houston,Texas and beyond. Their latest collection and show “Siamese” is currently on view at Redbud Gallery through December 29, 2013. Katy and Patrick answered some questions for us, explaining their interpretation of the mystic word and how it plays out in this exhibition.

Q. How are you all toying with the idea of Siamese and what type of art has been cultivated out of the idea?

Katy: We were inspired by the one year anniversary of our daughter Tomorro Medrano. The definition of Siamese is exhibiting great resemblance: Tomorro,  resembles us both equally so it took two to make one. The true meaning of the word SIAMESE only exists within her. This collection is a true reflection of its creators. The growth and struggle of the two that made one, artistically and in life.

Q. What are some of the mediums that you are working with for this show?

Katy: In the past, a large amount of the collaborative work has been encased in thick custom built frames and behind glass. For this show we decided to create work that would exist outside of a frame. There are no frames in this show, instead the collaboration is taking place within sculptures. In other instances, the photograph has become a larger part of a painting. It’s something new, it was time to change things up and experiment.

Q. With the Siamese concept, you will already have a sense of duality from the pieces also coming from two different people. What will it be like when you add the addition of a viewer into the mix?

Patrick: Our goal is to inspire and provoke thought beyond our concept and reasons. It is an opened ended conversation between the artists and the viewer that bargains with a signal still frame, “A beautiful visual sentence “. The viewer is always the most important part of what we do. They finish the story.

Q. You have a young daughter now in your life (who is adorable by the way). How has parenthood and having a little one influenced your work?

Katy: Having a one year old has slowed us down a lot. This year we had one solo show in Paris in the Spring and participated in a traveling show this summer that went from Athens, Greece to Istanbul, Turkey but all in all we have probably only produced a total of 40-50 pieces this year, which is closer to the number of works we normally produce for a show before he had our daughter. Everyone always says how fast they grow, it’s really true so we are trying to enjoy her as much as possible.

Q. It is usual for other art forms to collaborate such as music and dance but it is rarer to find ongoing collaborations in visual art. Some say that through collaboration the true nature of art is revealed. What were some of the things that fused you two together artistically when you first started creating together and what aspects have kept the duel process going?

Katy: The love for all things historic is a common inspiration for our work. I’d say that for me, Patrick opened my mind to the idea that photography can exist in many forms not just in one dimensional print form, the mystery of seeing what the other one will bring to the table when working on a pieces always keeps us creating. I think our individual styles complement each other, a nice balance of light and dark.

Q. Another project I would like for our readers to know about is the Fodice Foundation. Please tell me a little bit about it and what you all have planned for the foundation in the New Year?

Katy: We created the Fodice Foundation (501c3 non profit) in 2008 to save a historic building in East Texas. The building itself was a WPA project in 1938, it’s a giant stone school house built for a segregated African American community nestled deep in the piney woods. It’s a place that has been a part of our creative process since the beginning. After many years of creating art there, we decided to do something to try to save it and allow it to continue to inspire and nurture artists the way it has us. So in short, the idea is to save the very unique history of the building and allow its inspiring legacy of education to live on thru the arts. Once restored, the foundation will operate a year around artist residency and bring arts education and advancement to a rural part of Texas that needs it. We hold annual events at the school to try to raise both funds and project awareness, the school itself is in very bad condition and we have to start moving fast in order to get funding before it’s too late. We hope to begin a major capital campaign next year with complete plans to begin phase one of the project.

Q. As the year comes to a close, what are your artistic (and/or non-artistic) hopes for the New Year?

Patrick: Our hopes for 2014, are bigger and better things in smaller happier packages: Less work, more pay. Stronger coffee. To make a positive difference in other people’s life’s. To get and give more hugs.  And the big one, to slow time down. Just a bit!

For more information about the exhibition, visit: http://www.redbudgallery.com/