Posted by: Will Guess November 15, 2013 in Featured, Local Events, Music Leave a comment 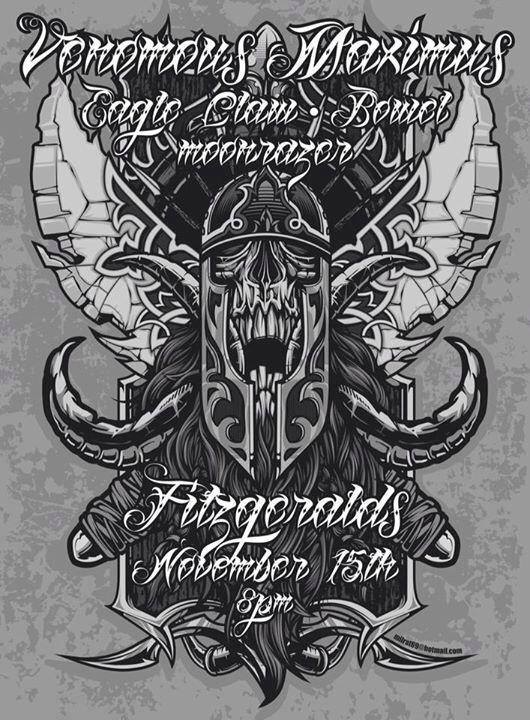 In today’s music scene, bands like Venomous Maximus are few and far between – especially in Houston.  The brainchild of tattoo artist, voodoo and cult connoisseur, and all around badass Gregg Higgins, the band has been on a steady rise in popularity.   This city hasn’t seen a heavy band like this in years, and Higgins and his crew have no plans of slowing down.  The band headlines a show at Fitzgerald’s tonight with other local heavyweights Bowel, Eagle Claw, and MoonRazer.  FPH had the pleasure of sitting down and talking to Higgins about his band, the local scene, what’s in store for the band next, and much more.

What are your thoughts on the current state of Houston’s heavy music scene?

Things are good. War Master is doing great right now, I know Bowel is preparing to write new material and play some shows.  Peasant is evolving right on time. I just did a cover for a PLF record so things seem to be rolling.  The only complaint I’ve ever had with Houston’s music scene is how divided it is.  This town is like the fucking Warriors - you got the punks, you got the mods and the rockabillies, you got rock n roll bands, you got death metal bands and all the indie hipster music, But nobody just wants to throw shows together.  We all get drunk together ever other weekend at Next Door Bar, Cecil’s, and Boondocks but we don’t book shows together because we don’t wear the same costumes.  If I threw shows, I would call it “Come As Your Madness”.  Every band would be a different genre, but the leaders of their pack.  I know it sounds hippy, but we need to just all come together.  There would definitely be more chicks!

What’s the craziest road story for the band thus far?

First of all, mystery is sexy and loose lips sink ships but there have been numerous paranormal and incredibly odd coincidences happen.  Back in February when we played with Down, Christian was given a beautiful tiger eye ring.  I told him to stop celebrating because he was going to give the ring OhhO -the evil eye.  Sure enough, we played Milwaukee and he lost the ring! I told him as I always do, do not worry - it is fate - the ring will find us.  Six months later, we’re playing Pennsylvania.  We were tired and hungover on the road, to the point of exhaustion.  I told Christian, “I’m asking the first guy that I see if we can stay at his house” because that is my self appointed job on the road.  So I walk up to this Hesher with hair half way down his ass and a giant Vitus tattoo and figure he’s got to be a cool dude.  His name winds up being Chris.  He had heard of the band, said he had come to the show to see us, was a super cool dude and put us up at his gigantic house.  In the morning whenever it was time to wake up, I went to the coffee table that we had all thrown our rings and chain wallets on before going to bed, which was actually a beautiful site, and there it was! I instantly knew that this guy had gone to see Down in Milwaukee. As soon as Christian washed his hands in the restroom and took his ring off, walked out of the restroom, this guy Chris walked straight up to the sink and saw Christian’s ring.  Then once he had walked out of the rest room, he saw and heard our band for the first time opening up for Down.  So six months later when we played in his hometown, he went to go fucking see us! The part of the story that has a touch of the divine is when I made the choice in despair to ask the first person for a place to stay.  That is what I call self synchronicity by fulfilling fate through destiny.  So I walked up to Christian and said “Here’s your ring” and walked off giggling.  So the point of the story is, don’t love things too much because if they’re in your fate, destiny will always bring you together.

The band has come a long way from initial vision to reality. Do you think you’ve executed what you strived to be from the beginning?  How has your plan differed from the actual happenings?

It’s really crazy - even us - from the very beginning when it was just me and Bongo - We always had these imaginary ideas that we were going to be as famous as Metallica or some silly shit like that.  Never taking it serious, just enjoying ourselves like BIll and Ted.  Pretending that we are going to be wild stallions.  But I can see now, a big reason why anything that’s happened to us has been that we always believed in ourselves.  We believe that if we tried harder and sacrificed more than we ever had in the past in any previous bands, that something would have to click.  Just the name alone put a huge amount of pressure for us to fulfill.  One thing I try to tell the other guys when they say they want to start a band is try to practice 6 months to a year before playing shows.  We were kicking it around at Francisco’s practicing twice a weeks for about 13 months before our first show.  We’ve been a band almost five years and are still working on our second record.  We take our time and try to perfect and transmutate as much as we can before we finally record our music.

]What’s next for the band?

Right now, we are in the middle of recording our new album entitled Firewalker. We are going to do a few videos for the record. One will be a ten minute short.  This next year we’re going to be releasing vinyl sculptures and a full new line of merch - hats, shirts, patches, etc.  At the beginning of the year, I’m going to get started on custom jackets that will be very limited but 100% handmade.  So just pay close attention to our webstore and Facebook or just contact me. I promise you haven’t seen anything like what I have in store. It has recently become available for me to record music at home due to my new roommate, Eric.  So I have solo music I’m starting to record - nothing real over the top like Venomous Maximus, just some ambient soundtracks for meditation.  Oh yeah, we have one big secret mission that I can’t say anything about.  So we are pretty busy dudes since we’re all living on borrowed time anyway.  The world was already supposed to end so people should get to work creatively. The boss is already here.

What influences you the most when writing?

I’m always caught up on little symbols and themes as the months go by. For the past two months, all I can think about, draw, or sing about is one white rose.  The stems, the leaves, everything white.  So I researched the color white.  What it means in different cultures.  What it means in correlation to meditation.  And then I play off the classic red rose and what red means.  I do tattoos and roses are a huge part of my life and my income.  So I think about what a black rose means.  And I think of the idea of being given a rose.  So once I do a painting of it, once I write words about it, once I write guitar riffs about it, I find out what the white rose means to me.  This is how my whole art filter system works.  It goes from topic to topic and I can already tell my next one is going to be hands.

Do you think Houston can become a hot spot for up and coming heavy music?

Any place that can acquire a Gibson and a Marshall can cultivate rock n roll.  The hard part is the actual players can’t be afraid to make fools of themselves.  Everybody plays it safe.  You can’t be afraid of what people are going to think of you.  But what you figure out is that physical freedom of your body is one of the most contagious things I have ever seen a human being do.  In normal people language, we need more fests!