Not To Be Missed: The Locals At FPSF 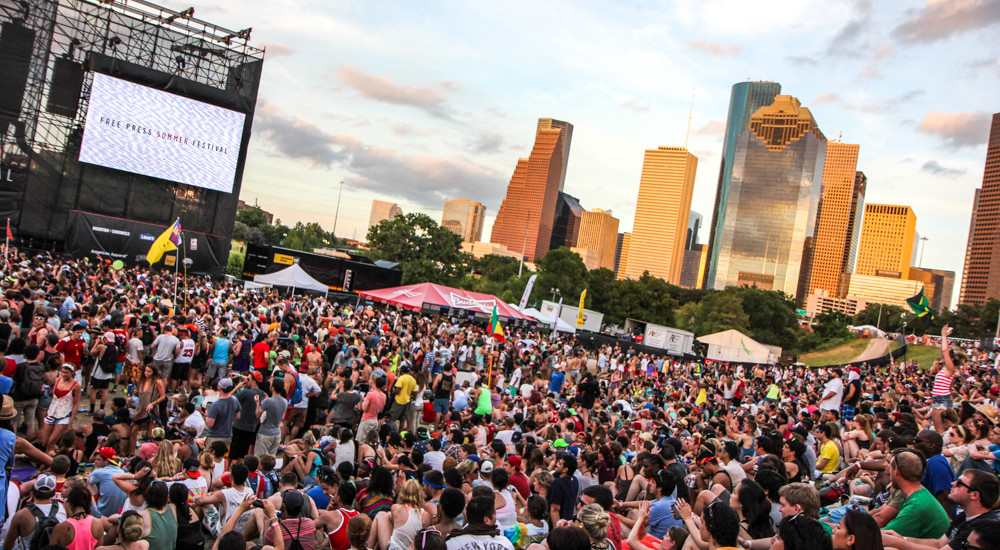 It’s that time of year again, where we as Houstonians, brave the heat to get down to the fun, music, and art that will encapsulate downtown at Free Press Summer Fest.  There are seriously some great touring acts this year that everyone should check out Including Lord Huron, King Khan & The Shrines,and Mariachi El Bronx.  But, part of what sets this festival apart from so many others, is the use of local acts.  This year, a diverse offering of some of Houston’s best and brightest will be taking the stage, and none should be missed.

It needs to be noted that the festival gets going at 11:00 am, and that if you wanna get in quickly; have all of your pass info ready to go.  That means that you should have parked,  applied sunscreen,and carefully packed your bag before getting to the gates at no later than 10:15.  Keep in mind, that’s only if you wanna’ get in when the gates open.  I plan on making the first couple hours of each day soaking up as much local music as possible.

On Saturday, you should know that the music starts at 11:10 in the Chill Zone.  The Chill Zone will feature DJ Fredster and friends that include Lacey Youngblood, Flcon Fcker, and more.  If that’s not your thing, then there are other musical offerings getting started at the same time.  However, recently Houston’s Flcon Fcker was asked to play the Silent Disco at Bonnaroo; which is to say that it looks like he’s on the verge of blowing up, so this is a great way to check him out.  I can also say that I caught Lacey Youngblood drop some seriously mad science at Boondock’s when she opened for NYPC; so you should make it out for her as well.

Over at the Jupiter stage, Carnival Talk will be performing their synth pop sounds at 11:20.  I caught these guys at Fitz a while back and I can attest to their great sound.  They have this way of mixing creepy synths atop an almost dreamy beat that’s only made better by singer Molly Gavin’s direct vocals.  They should make for a very entertaining set and they’re definitely worth checking out.

At noon on the Saturn stage, one of Houston’s most underrated rappers, iLL Liad will drop his sick rhymes on everyone in attendance.  His most recent drop, “Rise and Fall” has quickly become one of my favorite jams.  He actually might be one of the performers I’m most excited to see this year.  iLL has the ability to mix a woman’s stellar backing vocals, a sick beat, and his rhythmic flow to everything he touches; so don’t be shocked by a hefty list of guests on his set.

Also at noon, over at the Mercury stage, Houston’s Children of Pop will be living up to their name.  Their sound is definitely poppy, but it’s also pretty damn infectious.  These guys have the ability to harken back to the Happy Mondays sound, without lifting a single note.  The dual vocals mixed with great guitar hooks and a catchy beat make them an act you should catch before they take over the world with their happy go lucky sound.

After Children of Pop play, you would be wise to stay at the Mercury stage to catch the immense power of Houston’s BLSHS at 1:00.  I can’t say enough good things about this synth pop three piece, that I didn’t already say when I reviewed their album.  With the mix of Michelle’s hauntingly powerful vocals, to Chris and Rick’s synth meets beats compositions; there’s plenty of value in seeing them at the festival.  I have a feeling that after shooting several videos and making plenty of appearances all over, that BLSHS is on their way to getting big outside of Houston.  This is one of your last chances to see them before they belong to the world.

Of course, sometimes these festivals make life hard on the attendees.  Of course I only mean this in scheduling, because Houston’s Wild Moccasins will also be playing at 1:00 at the Mars stage.  I find it hard to believe that there could be people who haven’t seen these guys live yet, but if you’re in the minority; you should catch them before they leave on a long tour and impress everyone they play in front of.  Anyone who caught their album release party at Numbers earlier this year, can tell you that they’re definitely worth making it out for.

While you’re at the Mars stage, you’d be doing yourself a disservice by missing Houston’s The Tontons who perform at 2:10.  When I reviewed their latest album, “Make Out King and Other Stories of Love,” I found that I had missed out on one of our city’s best up and coming bands by not paying attention to them prior to it’s release.  If you haven’t seen them, get ready for a singer who needs space to groove to the sounds the band plays atop her very unique vocals.  These guys are definitely a local band to see before they belong to the world, and not just Houston.

Of course,over at the Jupiter stage at 2:30, you can catch the mad hip hop skills of Houston’s De’ Wayne Jackson.  Jackson’s 2013 release, “Who Is He” should be an album that every Houstonian puts on their “must hear” list as soon as possible.  And his latest masterpiece, “Halftime” which also features Donnie Houston is just as sick and catchy.  It makes any fan of hip hop realize why Houston produces the best rappers in the world.

You should definitely cap off your Saturday of locals, with the impressive Welcome to Houston performance on the Neptune stage at 6:10.  I shouldn’t have to sell this to you, but Houston has such a deep hip hop roster of talent, that this performance should delight everyone at the festival.  Bun B, Slim Thug, Devin The Dude, Z-Ro, Paul Wall, and Mike Jones will all be on stage at the same time.  That’s all you need to know, as that’s more intense talent on one stage since those Motown anniversary shows of the seventies.

Your Sunday at the festival, should start out with the crazy DJ style of Gracie Chavez over at the Jupiter stage at 11:10.  Mixing Latin infused rhythm with scratch skills that would make DJ Hurricane retire, Chavez will bring her own style to the festival, and leave most of you in awe and possibly, with weak knees from getting down to her crazy beats.

Unless you’re the age of some of us at FPH, you probably don’t remember The Pain Teens era of Houston music.  That’s totally okay, but what you shouldn’t miss is what some of their former members are doing over on the Venus stage also at 11:10.  The Dead Links have a very prog rock sound that transforms you back to the Zappa sounds that once littered Houston’s music scene.  I’m pretty sure that Chuck at Vinal Edge could tell some tales of the past twenty years in avant garde music around Houston.  The Dead Links are carrying that sound on, and doing so in the best way possible; so you should check them out if you’ve never caught them before.

I might be the one guy who hasn’t seen Houston’s New York City Queens yet, so I’ll be checking them out on the Neptune stage at 11:30 on Sunday.  The sheer pop goodness that is their song, “Tell Me All About It” should be enough for any Houstonian to make it over for.  Everyone in Houston who’s seen these guys will look at you crazily like they do me, when you say you haven’t seen them yet.  End those crazy looks like I plan to and catch them at the festival.

Recently, a rep from one of the best labels running told me about bands he wanted to see at the festival this year.  One that he proclaimed such love for, was Houston’s Born Liars.  These guys are fast, furious, and catchy; like Television, The Jam, and Stiff Little Fingers made a lovechild.  They’ll bring all of this and more over to the Venus stage at 12:10.  This is a great way to get pumped for what else the festival has to offer, so don’t miss these guys bring their high energy to everyone within earshot of their stage.

I would think, that by now you would’ve heard of Houston’s Grand Old Grizzly.  If you haven’t, I’ll just note that their 2012 self titled album was one of the best mixes of Americana and country I’ve heard in a long time.  Over on the Saturn stage at 12:30, they’ll bring that entertaining mix to the festival.  There’s something magical in Will Thomas’ vocals that’s only brought to life in an almost Creedence Clearwater Revival type of way.  Check these guys out while you still can.

On the Jupiter stage at 1:00, one of the best kept secrets in Houston music, Another Run will bring their high energy sound to life.  I have to admit that watching these guys tear through a raucous set is something everyone in town should experience firsthand.  If not for singer Adrian Grammer’s strong vocals, then at least watch them electrify the audience with their intense live performance.  You won’t sweat half as hard as these guys do when you watch them, and you’ll probably find a new favorite band when you do.

When I was in highschool, I started a ska band with some friends.  Then we saw Los Skarnales and we decided to call it quits.  We knew back then that we could never bring the type of energy to a stage like they could.  Now, twenty years later, these guys are still bringing that energy, and they’ll bring it again on the Jupiter stage at 2:10.  One of Houston’s most under appreciated acts, Skarnales has stood the test of time and kept trucking along while other ska bands fell by the wayside.  At this point, these guys need a statue or at least landmark status.  Of course, if you catch their high energy show on Sunday, they might just blow you away like they do most crowds when they perform.  This is a not to be missed act at the festival this year.  Mixing Latin rhythm with Spanish and English vocals, Skarnales will teach you what energy is all about when they intertwine horns and rude boy style.  I can’t express how much you’ll miss if you don’t catch these guys so you might as well make it out, or be sad when everyone tells you what you missed.

That’s of course, not every local act that’s performing this year.  This is just a sample of what’s in store, but easily it’s a list of performers who appreciate you watching them more than you’ll ever know.  Please lock your car, use good judgement, and have fun.  This is one of the best things that happens in Houston, so do the city proud by being a respectful citizen and catch some of your fellow Houstonians entertaining you for the sheer enjoyment of the opportunity to do so.  If you want to make new friends, let them know how much you like them when they’re done.  I’ll see you out there while we all gaze in the cool aspect of all that this festival offers, and does for our great city.